The themes of late 2017 continued into the first quarter of 2018. Emerging markets continued to move stronger, driven by expectations of strong, synchronous global growth with no significant upward pressure on inflation. Strong upward growth revisions in the US and many of the emerging markets drove global growth expectations higher to between 3.5% and 4% for 2018. Undoubtedly, 2017 was a year of very low or no realised volatility, with the VIX (The Chicago Board Options Exchange SPX Volatility Index – a proxy for global market volatility) registering three consecutive all-time lows.  However, even a massive spike in that index to levels of 30% from below 10% was not enough to derail the valuations of emerging market currencies and local bond markets in the first quarter of 2018.  For the first three months of the year, emerging market bonds returned 4.3% in dollars, as suggested by the JP Morgan Government Bond Index-Emerging Markets (GBI-EM) Diversified Index, compared to 1.2% for emerging market equities and -0.8% for the Standard & Poor’s (S&P) 500 Index.

In SA, ‘Ramaphoria’ continued to inspire a further rally in local assets. The election of Cyril Ramaphosa as leader of the ANC was a much-needed step in the right direction. What has proven surprising is the pace and impact of consequent changes. His replacement of Jacob Zuma as president of the country led to a cabinet reshuffle to focus on policy stability and implementation. Emphasis has been on getting state-owned enterprises back on track, with the appointment of credible individuals at Eskom and the department of public enterprises.  Most importantly, Ramaphosa has inspired a nation to hope again. The announcement of an adequate budget added further credibility, as it sought to put SA back on the path to fiscal consolidation by making tough decisions on VAT increases and expenditure. SA bonds, despite rallying 50 basis points (bps) since the ANC elective conference, continued to revel in the ‘new dawn’, with the benchmark bond rallying another 50 bps to end the quarter at 7.98%. The All Bond Index (ALBI) returned 8.1%, driven primarily by the bonds with maturity of greater than 12 years (constituting 60% of the ALBI), which returned 10%. The R900 billion reduction in bond issuance by the National Treasury at its weekly auction drove the outperformance of the longer end of the bond curve.

The local economy is now fundamentally on a much stronger footing, with local inflation forecasts and expectations revised lower. Inflation, as measured by the CPI headline index, is set to average 5% over the next two years and should, at the bare minimum, start to alleviate pressure on an economy that has struggled to grow meaningfully above 1% over the last three years. Furthermore, the risks to inflation are tilted to the downside, stemming primarily from food (15% of the basket) and services (50% of the basket) inflation. Service prices are set based on historical CPI measurements, and based on lower expected inflation going forward, it is very likely that this becomes self-reinforcing, resulting in stable to lower services prices. In addition, regulatory scrutiny in the insurance and medical aid industries should help keep prices in check. The consumer should benefit from lower inflation as real disposable income increases, underpinning the growth recovery. As ‘Ramaphoria’ filters through South Africa, we should also see a renewed uptick in both business and consumer confidence. This increased confidence should enable corporate South Africa to start spending on inventory renewal and investing in longer-term projects. The combination of increased consumer spending and fixed investment could help South Africa achieve 2% to 2.5% growth over the next two to three years. While this is a marked improvement, it is still some way off what is necessary to achieve sustainable job creation and reduce poverty levels.

The recent price moves in South African assets have been remarkable, but it is vital for South Africa and financial assets that prices do not move too far ahead of reality, especially given the long road ahead and risks around implementation.

The sheer magnitude of quantitative easing by the US Federal Reserve (Fed), Europe (the European Central Bank, ECB) and Japan (the Bank of Japan, BoJ) since the global financial crisis has driven global bonds yields tighter, particularly in developed markets. Since the Fed stopped its quantitative easing programme in 2014, both the BoJ and the ECB have taken up the slack, with purchases far in excess of those made by the Fed (see the graph below). However, in the next 18 months, global central banks are expected to purchase 80% less than they currently do. This, together with the fact that globally developed market policy rates are on aggregate expected to rise, suggests one should anticipate a further move higher in developed market bond yields, especially the US 10-year. The Fed’s current forecasts put the Fed funds rate (US policy rate) at 2.875% by the end of 2019, while the market is expecting closer to 2.475%. At the bare minimum, based purely on policy rates, if the Fed’s forecast is realised, it suggests that the US 10-year should be trading at 3.2%. Coupled with the removal of the largest buyers of Developed Market bonds from the market (the ECB and the BoJ), it is easy to justify 3.2% as a minimum expectation rather than a cap on US 10-year yields. 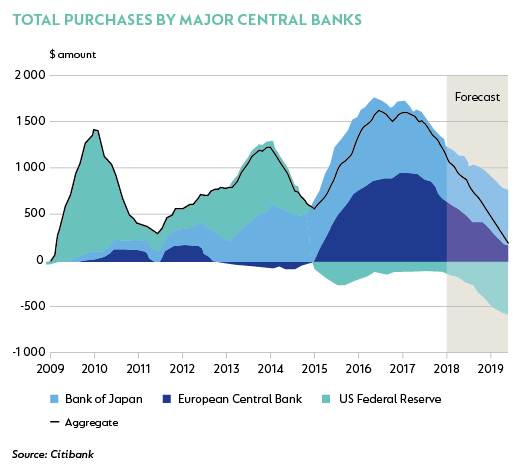 The purchase of bonds by global central banks has forced investors to go further up the risk curve in search of yield. This has led to a compression in credit spreads, especially in emerging markets, making it cheaper for many emerging market countries to borrow money. South Africa has also been a beneficiary of this hunt for yield. The country effectively has a split rating – Fitch and S&P rate it as sub-investment grade while Moody’s rates it investment grade. This makes the comparison of South Africa’s credit spread quite difficult. Thus, in the graph below, we use an average (the black line) of the BBB (Investment Grade [IG] Credit Index) and BB (the first rung of the sub-IG Credit Index) to compare South Africa’s credit spread. There are two key observations. First, South Africa trades slightly cheap relative to this average index, given its split rating (c. 25 bps). Secondly, the absolute level of these credit spreads is quite low. If a normalisation were to take place, that is, if global central banks continued to reduce quantitative easing as expected and remove policy accommodation, it is very likely that we would see credit spreads moving closer to their historical average (the dashed black line in the graph below). This implies that although the South Africa credit spread might move tighter relative to the average index, the absolute level of credit spreads will have to move wider. The longer-term average of the index is approximately 80 bps higher than current levels. To be conservative, if normalisation does occur, we could see credit spreads moving at least halfway back to their longer-term average, which is a move of 40 bps higher. In such an environment, even if South Africa does everything right and moves back to investment grade, we would still need to see the South Africa credit spreads 15 bps wider. The point is that the current level of the South Africa credit spread should be seen as a floor/minimum rather than having scope for further compression. 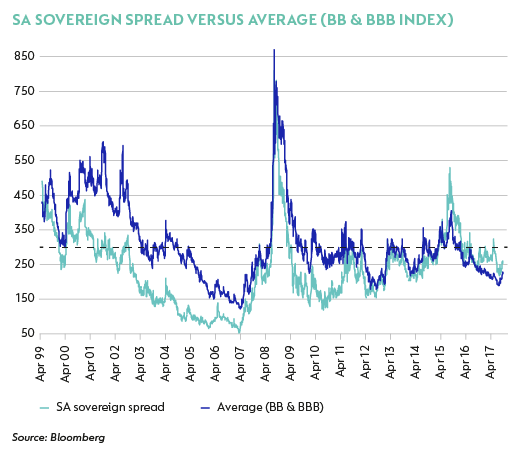 Adjusting our estimates of fair value for the above, we have a global risk-free rate of 3.2%, an South Africa credit spread of 2.62% and an inflation differential of 3%. This suggests a fair value on the South African 10-year of 8.82%, making the current level of 8.18% expensive.

The outlook for the local economy is much better. Inflation should allow the South African Reserve Bank room to ease rates a little more. In addition, lower inflation and positive sentiment should help increase consumer spending and provide a decent underpin for growth. This could lead to new investment by corporate South Africa into inventory renewal and long-term projects, which could also add more upside to the growth outlook. The pace of changes made by the new leadership has been impressive, but most of the easy wins have already been realised. What lies ahead is a much tougher battle. South Africa bonds have ridden the wave of optimism on the back of the new dawn. However, at current levels, most of the good news (if not more) has already been priced in. The risks from global monetary policy tightening (higher policy rates and a reduction in quantitative easing) could have negative consequences for South African bonds (which have a very limited buffer to withstand these shocks). We therefore choose to be cautious of South African bonds at current levels, looking instead for more attractive levels before moving to neutral or overweight positions.