Shareholder activists are agitating for eBay to unbundle its classifieds business. JSE-listed Prosus is in the running to acquire it.

JSE-listed Naspers, through its Amsterdam-listed spinoff Prosus, is in contention to acquire eBay’s classified advertising business for an estimated $8-billion to $10-billion. Others on the acquisition trail include Oslo-listed Adevinta, backed by Norwegian media house Schibsted (incidentally once an employer of Naspers CEO Bob van Dijk) and European publishing house Axel Springer backed by the private equity firm KKR. Should Prosus succeed, the firm will be the undisputed gorilla in the online classified markets space, with leading positions in online vehicle sales, real estate and jobs in all corners of the globe.

Naspers is best known for its 2001 decision to invest $32-million for a 46.5% stake in internet startup Tencent. Its stake has reduced to about 30% and is worth $159-billion currently. However, the Tencent war chest has enabled the firm to make billions of dollars worth of investments in its chosen vertical markets of food delivery, payments/fintech and, of course, classifieds investments as it endeavours to reduce its reliance on Tencent.

Naspers began investing in the online classifieds space in 2008 when it acquired Polish eCommerce platform Allegro. But the step-change came in 2010 when it acquired a majority stake in global classifieds player OLX for an estimated $40-million. OLX was seen as the eBay and Craigslist alternative for the world outside of the United States. The acquisitions continued and in 2014, Naspers increased its stake in OLX to 95%, making it its premier classifieds brand.

In 2015, Naspers acquired a majority in Russian classifieds site Avito, (bringing it up to 100% in 2018), and became the biggest investor in Letgo, an online marketplace that allows users to trade used goods and chat with each other in the US.

“Prosus has one of the broadest online classifieds’ portfolios globally, with a presence in most major emerging markets, and dominant positions in Russia, Brazil and Poland,”says Coronation portfolio manager Adrian Zetler. “We believe the classifieds model is very attractive, as strong network effects, once dominant, allow the winner to enjoy high margins and low capital expenditure, and therefore high free cash flow conversion. The shifting of advertising budgets from offline to online continues to provide a structural tailwind for the business. In this vertical, there are also a number of consolidation and bolt-on merger and acquisition opportunities that we believe can add significant value.”

The investment effort paid off in 2019 when Prosus announced that its classifieds business managed its first trading profit of $2-million, compared to a $114-million loss the previous year. eBay’s classifieds business, which operates in 13 markets, mostly in Europe and includes vehicle marketplaces and general classifieds platforms such as Gumtree, would be a good fit. However, should the deal go the Prosus way, some competition issues may arise, specifically with regard to Gumtree in South Africa. In March 2020, the Competition Tribunal prohibited OLX SA’s acquisition of We Buy Cars, arguing that it would lessen competition in the local market.

With Gumtree and OLX both offering a similar range of classified services, it seems likely that the deal may raise the eyebrows of the ever-watchful competition authorities.

Naspers is currently in a closed period, with results due on 29 June 2020, and was thus unwilling to comment on this story. One fact that is not in dispute is that Prosus has a strong balance sheet and would not have to rely on risk-averse bankers to fund the deal. This follows the 2018 sale of a small portion of its Tencent stake, raising  $10-billion. “They have been extremely disciplined in how they deployed this capital and today still have $4.5-billion in cash on their balance sheet,” says Zetler. “This cash pile is incredibly valuable in the current environment and gives them significant financial flexibility, should attractive M&A opportunities arise.” 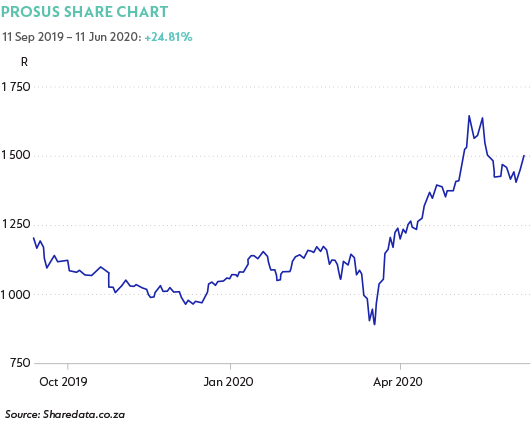 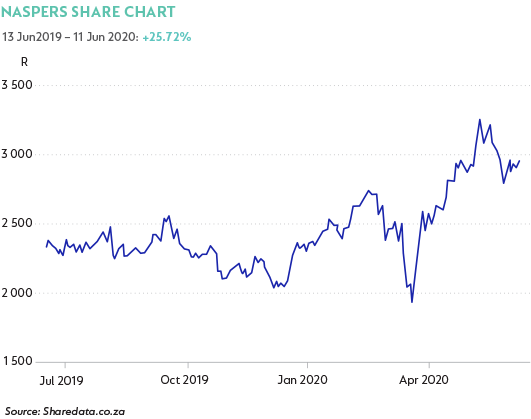 Prosus could also finance the deal through a mixture of debt and equity. Both Naspers and Prosus have seen strong share price appreciation in the last few months, largely because of their exposure to Tencent, which has proven remarkably resilient during the recent Covid-19-induced economic turmoil. “Tencent is set to capitalise on China’s transition to a digital economy and we are very excited about its online payments and fintech business,” Zetler says.

A fact that continues to frustrate investors is the persistent discount in the share price. Despite the restructure in 2019, which saw Naspers unbundle its international assets into Prosus, which was subsequently unbundled to shareholders, the two companies continue to trade at a discount to the net asset value. Prosus currently trades at around a 30% discount to its intrinsic net asset value, while Naspers trades at around 50%. “We find these discounts puzzling, given the long-term investment track record. As such, we think the market is grossly mispricing these stocks at current levels and has therefore created a fantastic opportunity for long-term investors,” says Zetler.

The discount may narrow if management achieves its objectives of, among other things, creating value for shareholders. Pulling off the eBay acquisition may just be one way of doing that.