Bond outlook (commentary for the fourth quarter of 2012)

The All Bond Index (ALBI) gained 2.3% in December, bringing its return for the 2012 calendar year to 16%. This impressive performance was still outdone by inflation-linked bonds (ILBs), which returned 3% in December and 19.4% for the year. Cash lagged far behind with an annual return of 5.6%. 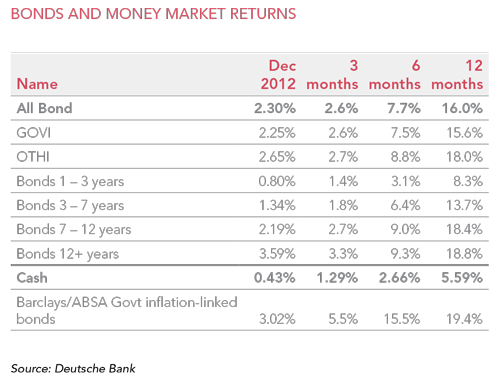 The bond market return for the year is particularly good considering the less than impressive domestic fundamental backdrop:

The global environment, however, came to the rescue in 2012. Despite the bouts of risk aversion, the global search for yield – also underpinned by South Africa’s inclusion in the Citigroup World Government Bond Index in October 2012 – saw large flows into the local bond market. For the year, net foreign purchases of South African bonds totalled a record R85 billion. And, as elsewhere, the market benefited from accommodative monetary policy, which anchored the short end of the yield curve. This incentivised investors to move out along the curve (which remains steep) to pick up yield. 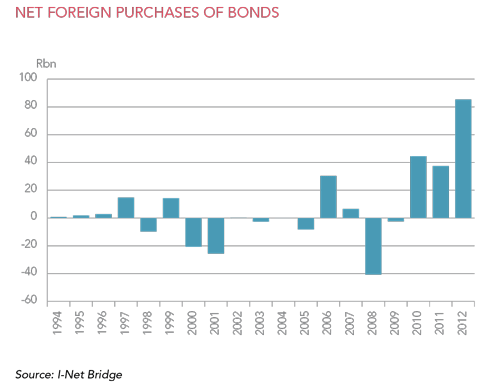 The outperformance by ILBs seemed to stem both from understandable inflation concerns (given accommodative policy and the weaker rand later in the year) and a positive global environment for these bonds (the chart overleaf shows real yields in South Africa closely shadowing trends in the US). In a world where real cash rates are negative, guaranteed real returns are prized to such an extent that in South Africa the two shortest-dated ILBs were both trading at negative real yields by year-end. 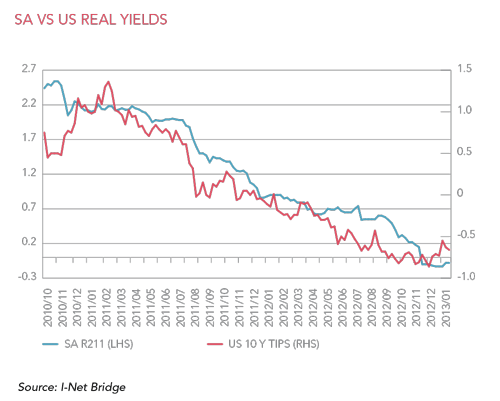 Looking ahead, the crystal ball is as murky as ever. We are fairly confident that the domestic fundamentals for South African bonds are not positive. The funding requirement remains large: a net R136 billion (gross R157 billion) for the 2013/2014 fiscal year, with only a small moderation forecast in the following two years. The inflation outlook is not encouraging either – although there are indications that the current food price cycle will peak in the first half of this year, pass through from rand weakness will pressure CPI and we expect a net upward effect from the rebasing and reweighting exercise. All in all, we expect to see CPI breaching the upper end of the target range again this year. Underlying vulnerability is likely to remain in the currency as well, given that the massive trade deficit is likely to take some time to reverse and we expect another large current account deficit in 2013. Finally, as expected, Fitch has followed S&P and Moody’s by downgrading their credit rating for South Africa from BBB+ to BBB, and we would not exclude the possibility of a further downgrade by Moody’s later in the year. We do not see much scope for another rate cut in 2012, as inflation concerns offset any lingering concerns about growth, especially while policy remains accommodative.

Looking forward, we expect that bond yields, both locally and globally, would have to rise over the medium term compared to the trend of the past decade. This is to compensate for higher inflation risk premiums which have been spurned by the recent unprecedented global monetary policy actions. Conversely, this trend will add another layer of structural support for ILBs. In positioning our fixed interest portfolios, we continue to run shorter than benchmark duration positions and have maintained our holdings in ILBs.