South Africa was included in Citigroup’s World Government Bond Index (WGBI) as at the close of business on 28 September 2012, and predictably September recorded large foreign buying of bonds again. A net of R8.4 billion was purchased, bringing the year-to-date total to R76.5 billion – well ahead of any full-year total hitherto seen (see chart below). 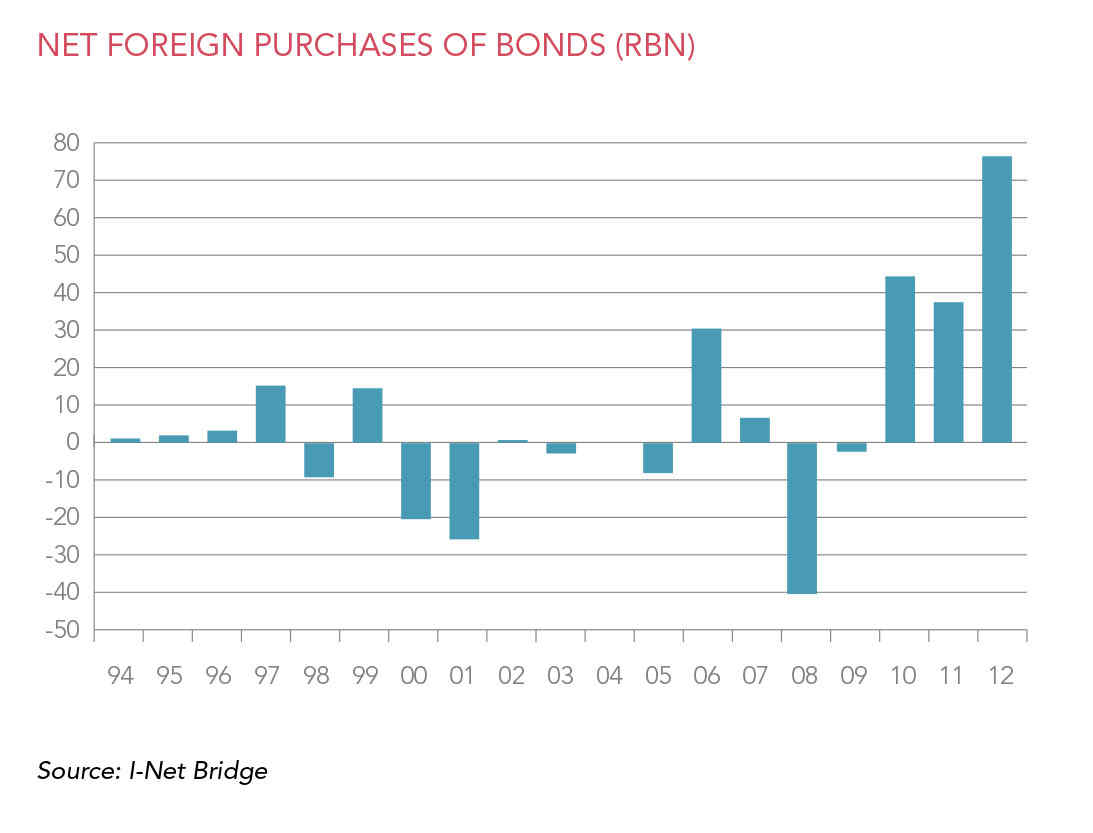 As has been the experience of other countries, inclusion into the WGBI shows that inflows tend to slow down following the inclusion date.

With the potential combination of a slowdown in inflows and a large current account deficit, the rand is vulnerable. The main reason is undoubtedly the rapidly worsening trade account, where continual record year-to-date deficits have been recorded since February. We expect a current account deficit close to, if not in
excess of, 6% of GDP for this year. The July repo rate cut will exacerbate the situation by supporting import demand, while export demand is contingent on (weak) external demand. Strike action will negatively affect exports. In addition, the large foreign ownership of South African bonds (around 35% of government nominal
bonds in issue) where semi-annual coupons are repatriated via the income account of the current account, all combine to make a rather lethal cocktail for the rand.

On 27 September, the day prior to South Africa’s inclusion in the WGBI, Moody’s was the first of the ratings agencies to act on its negative outlook, downgrading the country from A3 to Baa1 (matching Standard & Poor’s and Fitch ratings). All three agencies have attributed South Africa with a negative outlook, which opens
up the possibility of further downgrades. Undoubtedly the three important upcoming events will be watched closely, namely the Medium Term Budget Policy Statement in late October, the ANC National Policy Conference in December, and the Annual Budget in February 2013. We have one of the widest budget deficits
within the emerging markets universe and need to do more in reining this in to contain ratings deterioration.

Inflation in August rose slightly to 5%, indicating that a trough was reached in July. We expect CPI to continue higher from here, partly due to food price pressures, rising towards year-end and into 2013, with another breach of the target expected in the second half of the year. Given the SA Reserve Bank’s clear tilt towards
concern over domestic and global growth risks, we cannot discount another rate cut.

While there is the possibility of a further rate cut, the rising current account deficit with its potential knock-on effect on the rand poses a major risk to the South African bond market.

MARK LE ROUX is responsible for the fixed interest investment process and portfolio management functions for both institutional and retail portfolios. Mark has 21 years’ experience in managing both traditional and alternative portfolios.