Pioneer Foods owns a portfolio of household names that fill the shopping baskets and kitchens of consumers across the country – brands such as Sasko bread, Ceres and Liqui-Fruit juice, Spekko rice, Moir’s baking products, Wellington’s sauces and Bokomo Weet-Bix. It is an enviable collection and one that should enable the business to continue its growth trajectory.

As a result of recent corporate action in the agricultural sector, a significant number of Pioneer shares were made available to Coronation, taking our ownership on behalf of clients to 13.5% of total shares in issue. The shares were acquired at a 12-month forward PE multiple of 11.3 times, which is highly attractive relative to generally expensive industrial domestic shares and well below our view of what the business is worth. In addition, this multiple is being applied to low earnings hurt by high raw material prices and new manufacturing capacity expenses. 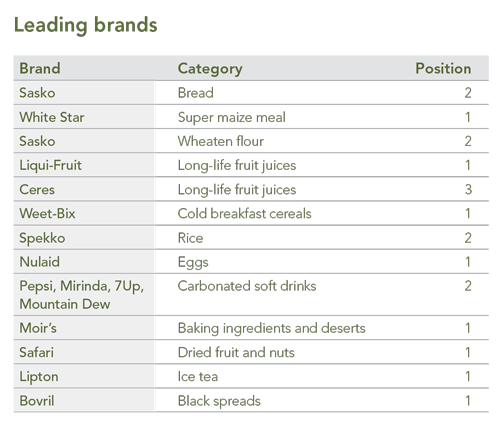 Pioneer Foods is a business emerging from a co-operative history. The roots of the group were formed in 1997 when the Sasko and Bokomo co-operatives merged to form a more diversified business with better national representation. The post-merger years were not idle, and from 1997 to 2007 the group completed numerous acquisitions to create the diversified portfolio that we know today. Brands acquired during this time include Ceres fruit juice, Liqui-Fruit, Moir’s, ProNutro, Maizena, Marmite and Safari dried fruit. A listing in 2008 gave the group access to capital markets that would fund the next leg of growth.

Since listing, the group has invested a large amount of capital upgrading facilities, deploying world-class machinery and relocating production capacity closer to sources of demand. Major areas of investment include the new Gauteng Moir’s biscuit plant, Gauteng beverage facility producing fruit juice and Pepsi brand beverages, Gauteng cornflakes plant, Gauteng broiler expansion, the creation of carbonated soft drink capacity in the Western Cape and the expansion of Weet-Bix, rice and pasta plants. In 2013, R400 million is to be channelled into the development of a new bakery in KwaZulu-Natal that will drive Sasko bread penetration in the region. The capital spend, which totals 20% market capitalisation over the past three years, is largely complete and should reduce dramatically beyond 2013. These investments have created the additional capacity to support future growth with scalable production lines and reduced distribution costs.

While the group has achieved much in terms of optimising its production footprint, it is yet to fully leverage the resulting efficiencies. This will be the key driver of earnings and returns in the years ahead. New machinery and production processes can result in higher cost levels for a long period of time. For example, the Moir’s biscuit plant installed in Gauteng will take several years to reach optimal production capacity. The Moir’s brand, traditionally strong in baking products, was extended to include biscuits when Pioneer made the new plant investment. Moir’s share of the biscuit market is currently too small for Pioneer to run large, dedicated production lines, which means that a single production line has to make several types of biscuits. This requires machinery changes after relatively short runs that result in far higher wastage rates. A truly efficient biscuit manufacturer needs large volumes to compete and so Pioneer is involved in an aggressive marketing campaign to win market share from its competitors. Moir’s limited range also provides competitors with the opportunity to move profits into areas of the market in which Moir’s does not currently play, and price aggressively in the areas in which they do compete. Building manufacturing know-how, growing market share and expanding the product range will take time and further investment in the business. It is this investment that one is seeing in the business (and earnings) today. Similar growth strategies are under way for other products such as Spekko rice.

We back Pioneer to get it right. They have shown a long-term approach to investing in their business and successfully entering new categories. One such success was their late entry into the maize meal market with a premium offering called White Star in 1999. Through intensive marketing over several years the group built and has maintained a leading position.

More recently, Pioneer successfully defended its position in the breakfast cereal market, which was threatened by a joint venture between General Mills and Nestlé. Product innovation in the children’s end of the market, through Otees, resulted in increased market share in the overall category as represented by Weet-Bix, ProNutro, Otees and Nature’s Source.

Pioneer’s ability to enter new categories has been under-pinned by private label manufacturing (production of goods under the retailer’s brand name) and strong retailer support. While private label volumes earn a lower margin, they ensure the critical manufacturing scale that makes it possible to launch competitively priced new products. Management has used this tactic to great effect.

Pioneer is also the local partner of choice for international businesses like Pepsi and Heinz. The size of the group gives new market entrants the scale and geographical reach necessary to achieve good product visibility and penetration. New entrants also benefit from the group’s local market knowledge. While Pepsi has been gaining market share, Pioneer has yet to take profit in this category, opting to focus on establishing their position as a strong number 2 in carbonated soft drinks. The Heinz joint venture extends Pioneer’s range to include condiments, seafood, frozen and convenience meals.

The capital expenditure programme was conducted while the group dealt with the distractions of a Competition Commission enquiry into offences committed in its baking and milling businesses. This absorbed a large amount of senior management time and resulted in a complete restructuring of the board, as well as financial penalties in the form of reduced pricing for several months in 2011 and fines. With this episode now firmly behind them, management is focused on the business.

Current earnings are low as capacity expansions and associated once-off costs have been exacerbated by high commodity prices. Staples comprise more of Pioneer’s basket than peers AVI and Tiger Brands, and hence it has been harder hit. The Pioneer Agriculture business is also very cyclical with the current downturn in broiler markets coinciding with a low point in the eggs business. This has resulted in the first cash loss for the Agriculture business since the merger in 1997. The broiler industry has recently implemented price increases, which should compensate for the higher feed costs over time. In the egg industry, tough conditions are driving many participants out of the market, which in time should create a more rational market that is supportive of price increases. Better results are expected going forward.

Incumbent CEO, André Hanekom, retires in March 2013 after 24 years with the group and 19 years as CEO. While elements of the co-operative legacy still remain (represented by the location of the head office in Paarl), huge steps have been made in transforming the culture. Having steered the business through its many phases, his retirement will coincide with the completion of the major capital works as detailed above. The search for a new CEO to lead the group in its next stage of development is under way. With a solid manufacturing footprint in place, focus can turn to generating operational efficiencies. Reduced infrastructure spend will enable more of the budget to be directed towards marketing, gaining greater market share for its strong portfolio of brands. These steps should bring margins closer to peers and complete the transition to a world-class, diversified FMCG business.

SARAH-JANE ALEXANDER joined the Coronation investment team in 2008 as an equity analyst. Her current responsibilities include co-managing the Coronation Industrial Fund as well as researching food producers and hospital stocks amongst others.