Few countries have had a history as varied and colourful as Russia. In the 20th century alone, Russia has borne witness to the lavish courts of the tsars, a revolution that gave birth to a communist state, the German invasion in World War II, the defeat of Germany and the rise of the Soviet Union as a super power, the Cold War, and finally the collapse of the Soviet Union and the birth of a new capitalist Russia.

Given Russia’s turbulent past, it is not surprising that few institutions have survived such extreme levels of change. Sberbank, or the ‘Savings Bank of the Russian Federation’, is one such institution. Established in 1841, it remains the largest bank in Russia today, and perhaps it is this longevity that resulted in Millward Brown Optimor, a leading global market research firm, naming Sberbank as the most valuable brand in Russia in 2012.

Russia is the largest country in the world and the scale of Sberbank is representative of the size of the country. Sberbank has a branch network of almost 20 000, which is an enormous number in both absolute and relative terms. For comparison purposes, Sberbank’s branch network is almost as large as the rest of the Russian banking sector combined, and dwarfs the branch network of South Africa’s retail banking leader, Absa, of under 1 000 branches in South Africa. This has contributed to Sberbank’s almost 50% share of the Russian retail deposit market. Retail deposits are coveted by banks because they are cheap (they earn a much lower interest rate than bulky corporate deposits) and tend to be sticky. As a result, Sberbank’s cost of funding is substantially below that of its peers and its market share of banking profits is consequently greater than its market share of banking assets. 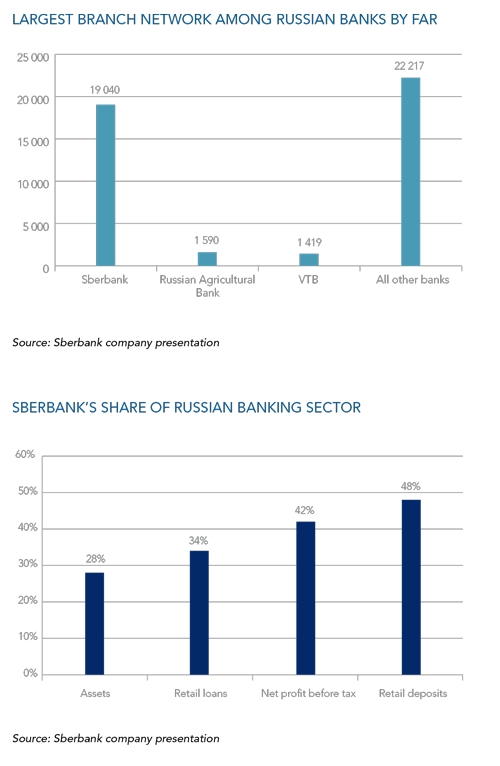 Notwithstanding Sberbank’s size, we also believe the growth prospects for banking in Russia generally, and Sberbank in particular, are very good. Today, Russia has a banking loan to GDP ratio of 44%, which is in line with Brazil but lower than both India and China. Russia also has the lowest household debt as a percentage of GDP amongst the BRIC nations, even though its disposable income per capita is the highest. While the growth outlook for both corporate loans and retail loans is favourable in Russia, retail loans should outgrow corporate loans in the medium term. Sberbank will be the primary beneficiary of this trend as one in every two Russians is already a client on the liability (deposit) side, and all Sberbank has to do is sell lending products to its existing client base. The number of products per retail client has increased from one in 2007 to 2.2 today. And the bank is targeting three products per retail client in the near future. An additional benefit of retail loans increasing as a proportion of total loans is that it should also provide a boost to risk-adjusted net interest
margins as the negotiating power of retail clients is lower. 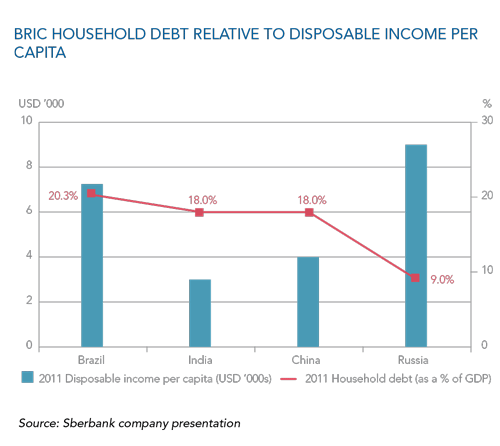 In recent years, under the capable leadership of Herman Gref, the former Russian minister of economy and trade (from 2000 to 2007), Sberbank has been transformed from a sleepy parastatal (Sberbank is still majority owned by government) to a profit-focused organisation. This has entailed creating additional revenue streams and embarking upon an ambitious transformation programme to make the bank more efficient.

One example of how the current management team has added additional revenue streams is bancassurance. When management took over the reins at Sberbank, it did not distribute any insurance products. In 2011, Sberbank generated US$500 million in fee and commission income per annum from the distribution of 20 different insurance companies’ products. This achievement was accomplished by adding very few additional employees and leveraging off the existing employee base and infrastructure.

The current high cost-to-income ratio reflects the upfront expenditure incurred to implement this transformation programme, but the benefits will still take a while to flow through.

In closing, there are two matters left to address: Sberbank’s balance sheet strength and valuation. Sberbank’s capital situation and provisioning levels are robust. The bank is sitting on a core tier 1 ratio of 11.2% and a provision cover ratio of 1.8 times, which means it holds 180 roubles of provisions for every 100 roubles of nonperforming loans. Finally, the bank trades on a forward P/E ratio of under 6 times and forward P/B ratio of 1.1 times for a business that should sustainably earn ROE in excess of 20%. Sberbank is a rare combination in the world of investing as it combines a relatively clear growth trajectory with a very attractive valuation. Sberbank currently represents 3.5% of the Coronation Global Emerging Markets fund portfolio.

KYLE WALES completed his BCom (Accounting) (Hons) at the Rand Afrikaans University (RAU) in 2004 and qualified as a Chartered Accountant in 2007. Before joining Coronation’s emerging markets team at the start of 2008, he completed his training contract in the banking division at PricewaterhouseCoopers which counts three of the four largest banking groups in South Africa as clients.