The canary in the coal mine

The collapse of Lehman Brothers and capitalism’s so called near death experience in September 2008 heralded the start of an extraordinary period for monetary policy. In the US, the federal funds rate was cut from 2% to zero over the course of the next few meetings of the Federal Reserve Board. The zero interest rate policy was, however, not deemed to work well enough and was augmented by even more stimulatory policies in the form of quantitative easing (QE). The various steps of QE became known as QE1, QE2 and QE3.

QE3 was the most aggressive, with the Federal Reserve Bank (Fed) buying $85 billion of bonds every month for an unlimited period. Monetary policy in Europe followed the US example and as Japan was already at near zero interest rates. We now had just about the entire developed world on a zero interest rate policy setting – an experiment that had never been tried before.

One consequence of this extreme policy was to create the ‘search for yield’ investment theme. Money streamed towards assets that offered reasonable yields, in turn driving them lower and lower. South Africa was a major beneficiary of this trend, enabling our government to easily fund its ever growing budget deficit while bond rates were driven lower and the inflows supported the rand despite the growing current account deficit.

We have warned for some time that this party will not last forever. Zero interest rates and QE policies are not normal and will eventually come to an end. Accordingly, we have avoided owning conventional bonds and high yielding assets across our portfolios. We said all along that we have no idea when the process to normalising monetary policy will start, but it is inevitable that it will.

The combination of all of these measures seems to have finally paid off and key indicators, such as employment, housing and durable sales in the US, have improved by enough that Fed chairman Ben Bernanke hinted in May this year that they will have to start thinking about tapering its $85 billion a month buying programme. This comment did not surprise us. In fact, we believe a start to more normal policy settings could have started earlier. Our views are, however, not always reflective of the market and, as can be seen from the chart of US 10-year treasuries below, the market reacted sharply. 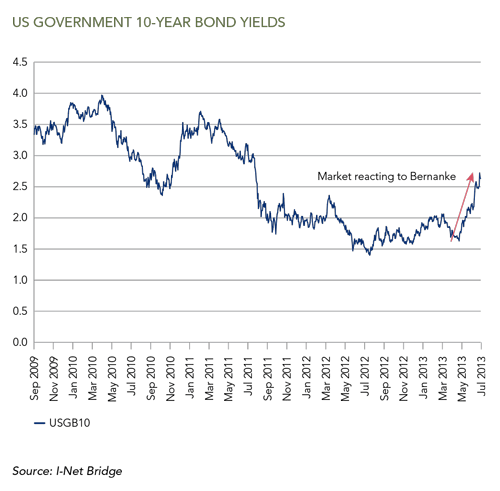 In our view this upward move has far from run its course. Rather, it is the first sign of what will happen when monetary policy starts to normalise. One must bear in mind that no changes in actual monetary policy have been made yet. Bernanke merely hinted at what is to come. The US bond market acts as the proverbial ‘canary in the coal mine’. It has signalled first what is likely to be the start of a major change in the investment environment.

A return to more normal interest rate policies will lead to rising yields in the developed world. This will spread to developing countries where interest rates on bonds will rise too in competition for the global savings pool. Currencies that benefited from the search for yield theme will come under pressure as the one-way flow they became accustomed to either stops or at worst reverses.

The rand has already weakened materially in anticipation of these changes. Our bond yields have also kicked higher and  in our view will go higher still. The Minister of Finance will find it tough to fund a large deficit in the absence of massive foreign inflows. South African tax payers should brace themselves for hikes in taxes over the next few years.

What does this mean for equities? One cannot be sure. We do, however, believe the Fed will be very careful in reducing the stimulus and will only do so if the underlying economy is healthy enough. In our view global equity valuations are still favourable and investors need not be fearful of the inevitable normalising interest rate trend.

The canary has signalled the start of what is likely to be a long period of rising yields. Returns from bonds will be poor, but into a recovering world we think it would be unwise to drop exposure to equities too early.

CHARLES DE KOCK is a senior portfolio manager with 26 years’ investment experience. He plays a leadership role in the asset allocation process and is responsible for the management of a number of client portfolios.