Karl is Chief Investment Officer (CIO) and manager of Coronation's Houseview strategies. He joined Coronation in 2000 as an equity analyst, was made head of research in 2005 and became CIO in 2008. Karl has 20 years' investment experience.

STEINHOFF, THE GLOBAL discount retailer with more than 11 000 stores in over 30 countries, suffered a spectacular share price collapse during December 2017. The company was one of the largest listed on the JSE. Our equity and multi-asset class funds were invested in Steinhoff equity to varying degrees, depending on the mandate of the fund.

A concise chronology of events is as follows:

In the period leading up to the release of Steinhoff’s full-year results, several public allegations of impropriety at the company were made. The first came in an article published by the German Manager Magazin on 24 August 2017. Most of the issues in this article had been previously disclosed by Steinhoff, or were known by the investment community. These included a history of numerous acquisitions, an ongoing legal dispute between Steinhoff and Andreas Seifert (the owner of its former joint venture partner XXXLutz) over the ownership of certain of its European retail operations, and the allegation that losses were being incurred in off-balance sheet entities. Steinhoff responded immediately by refuting the allegations on the JSE news service, SENS.

On 18 September 2017, Steinhoff released an announcement stating that Seifert had asked a Dutch court to review Steinhoff’s financial statements. It was challenging the appropriateness of consolidating the aforementioned retail business that Seifert believed he still partly owned. This announcement was no major surprise, given that the legal battle between the two parties had already been disclosed. Steinhoff management was adamant that the counterparty had a weak case. In addition, Steinhoff had already raised a provision in its accounts to cover the cash amount required to settle the case should the company be wrong in its assessment of the likely outcome. In the announcement, Steinhoff reminded stakeholders that its financial accounts had received an unqualified audit opinion from Deloitte and that the company remained confident that the case would be dismissed.

A second news article, this time on Reuters, appeared on 8 November 2017 – two days after the company had entered into a closed period ahead of the release of its financial results due early in December. This article raised some new allegations, one of which was serious: that Steinhoff held an undisclosed interest in a company called GT Branding Holding – a company whose 100%-owned subsidiary (GT Global Trademarks) had previously purchased certain Steinhoff brands. Since Steinhoff was in a closed period, it was constrained in its ability to respond to the article. Its only response therefore was a communication on SENS in which it vigorously defended the independent nature of the parties with whom it had transacted and its accounting treatment of the relevant transactions.

On 4 December 2017, with stakeholders expecting the release of Steinhoff’s financial results and clarity over the allegations, the company surprised the market by announcing that the results scheduled for release would be unaudited. Two days later, the resignation of CEO Markus Jooste was announced. This confirmed the market’s biggest fears and sparked a collapse in Steinhoff’s share price (amounting to a breathtaking 89% decline in that week).

The almost complete absence of any useful information from the company at a time when confidence in its financial position and creditworthiness hung in the balance, spoke volumes.

WHERE DO WE STAND NOW?

At the time of writing, stakeholders find themselves in an information vacuum. Possible outcomes range from the best-case scenario of tax evasion and inadequate disclosure of related-party transactions to that of sophisticated fraud orchestrated by the CEO. The former would result in a material, albeit manageable, reduction in Steinhoff’s intrinsic value. The latter holds much more serious implications for the long-term future of the company.

Until we have a better understanding of the nature and scale of these improprieties, we simply cannot speculate further. Without such information, and an understanding of how the banks are responding to the crisis, it is just not possible to value the company with any conviction. The stock could just as easily be worth more than the current market price as it could be less. At current prices, we are therefore likely to retain our equity holding in the company until more information has been made available publicly. At this stage, we are expecting that to be by the end of this month
(31 January).

There is no doubt that many parties will litigate against Steinhoff and its auditors. Until the full nature of what occurred is known we cannot commit to our actions in this regard; however, we will be sure to act in our clients’ best interests.

Finally, it is important to highlight that none of our portfolios have exposure to any debt or convertible instruments issued by Steinhoff.

WHY DID SO MANY OUTSIDERS MISS THIS?

Many observers are asking why such a long list of outsiders (equity and debt investors, banks, auditors and rating agencies) would be taken in by Steinhoff. In the dramatic and emotive events of December, it is easy to forget that indications of impropriety only surfaced in the very recent past. This is a company that thrived for almost two decades, notwithstanding the stress test of the global financial crisis (which did put pressure on the company, given its numerous European operations and its significant debt issuance to European investors) and the increased scrutiny that came from pursuing, and then achieving, a primary listing in Europe (which requires such steps as producing a listing prospectus). From its humble beginnings as a midsized manufacturer of furniture, it grew to become the second largest household goods retailer in Europe – a company with 130 000 employees, €13 billion in turnover and more than 11 000 stores.

At this stage, with the nature and scale of the improprieties still unknown, the question is of course impossible to answer. However, when the information is finally disclosed, we believe that one should consider it in the following context:

WHAT WAS OUR INVESTMENT CASE?

For the first decade of Steinhoff’s listing, we were very sceptical of the company, its numerous acquisitions and the quality of its earnings. However, over time, we gained comfort for the following reasons:

After gaining comfort on Steinhoff’s investability we built our investment case, which was premised on the following points:

DID WE GIVE DUE CONSIDERATION TO THE RISKS?

As with all investments, we were cognisant of the risks inherent in the investment case, and duly accounted for them, as follows:

Low tax rate: Steinhoff’s low tax rate has consistently been a concern. We took this issue seriously and questioned management in detail on the matter. Ultimately we gained comfort from the fact that Steinhoff did not use tax havens, that they had legitimate operations in certain low tax jurisdictions (such as the UK and Switzerland) and that they benefited from manufacturing tax incentives in Eastern Europe. One should also remember that many global multinationals achieve low tax rates (e.g. Steinhoff’s largest competitor Ikea, as well as Richemont, Pfizer, Johnson & Johnson, Google and Apple). After recent revelations, we now think it likely that some of Steinhoff’s structures crossed the line between tax evasion and tax avoidance.

Numerous acquisitions: Although many case studies of corporate failure include highly acquisitive companies, we would caution against sweeping generalisations that all acquisitive companies fail. Many successful SA companies have been built through acquisitions – examples include SA Breweries, Bidvest and Bidcorp. Steinhoff had also increasingly demonstrated capital discipline – by walking away from the Darty and Home Retail Group (Argos) bids when pricing reached unattractive levels.

Off-balance sheet transactions: This was a matter we took very seriously. We spent a great deal of time investigating the issue. At the time, we concluded that the motivation was tax structuring and we took account of the risk by assuming higher tax rates in the future and in our valuation of the company.

OUR ACTIONS IN THE LAST FEW MONTHS OF 2017

As soon as the allegations were made in Manager Magazin (24 August), we made contact with the magazine’s editor to request the contact details of Steinhoff’s former joint venture partner so that we could call him in our capacity as a shareholder of Steinhoff. The editor contacted him on our behalf, but unfortunately advised that the individual would not speak to us. We assumed this was because the matter was sub judice.

The Reuters article (8 November) contained allegations around Steinhoff’s ownership in GT Branding Holding (and that it was part of the Campion Capital Group). This ownership stake had never been disclosed by the company (as it should have been). This was our biggest concern, because it alleged that the Campion group had also bought JD Financial Services’ lending book from Steinhoff 18 months earlier. At the time we had questioned the sale with management, and the risk of an undisclosed related-party transaction, only to be given the plausible explanation that no related parties were involved and that the book had been sold to a European private equity firm with other sub-Saharan lending businesses.

The Reuters allegation was made only a few weeks before the group’s financial results were due for release and the company emphatically rejected the accusation via SENS. We were unable to speak to the company (because they were in a closed period), but arranged to discuss the issue with them as soon as results were in the public domain. We took comfort from the fact that Steinhoff had a strong and independent board, one that would be closely monitoring all company announcements. In addition, both the CFO and chairman of the supervisory board (Christo Wiese) bought material tranches of shares in early November. Ultimately, we elected not to be rash and sell when we felt that the stock more than priced in many of these concerns, and especially because our base case was very much that the motivation for the structuring was tax related (and not fraud, as has become more likely with developments since then).

It is often said that you learn something new every day in financial markets. The current Steinhoff crisis was a learning that we would have hoped to avoid, having had a healthy level of scepticism throughout and having conducted an enormous amount of independent due diligence.

Despite this, in the end, we still got it wrong. Although errors are part of the investment process, this one is hard to stomach. The failure of the board and the company’s independent auditors to identify what is at least two years of misstated financial statements is frustrating. It is mystifying that so many smart insiders, who, by definition, had better information than outsiders, were so heavily invested in the company and so blindsided by recent events.

When more information comes to light we will be able to undertake a more comprehensive study of what went wrong and update our clients accordingly.

Finally, as much as the loss on Steinhoff is disappointing, we do take comfort from the fact that ultimately we produce portfolios, as opposed to single-stock views, for our clients, and that our funds proved resilient in their performance, both through that first week of December and for 2017 as a whole. 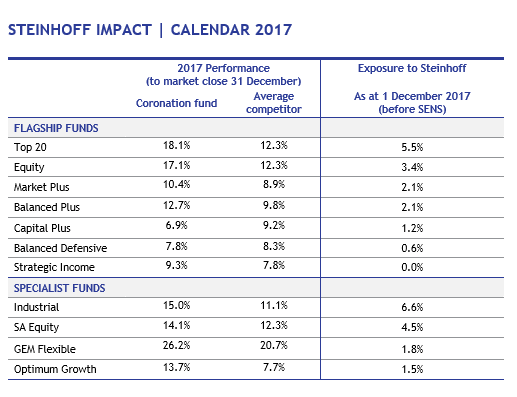 Funds not included in the table above have no exposure, or negligible exposure in the case of the Global Opportunities Equity Fund, to Steinhoff. Note that none of the Coronation unit trust funds have exposure to Steinhoff preference shares or debt.