Uncertainty is the enemy of growth - April 2019

WE STARTED THE year cautiously optimistic that a cyclical recovery, driven by some acceleration in consumer spending, was a reasonable expectation for the year ahead. However, we cautioned that anything more durable needed a commitment to accelerated policy reform and that time to deliver was short. We also cautioned that Eskom remained the biggest, most immediate threat to growth. At the end of the first quarter of 2019, we must reset these expectations. We still expect consumer spending to be the biggest driver of growth, and for growth to be marginally better than last year, but the starting point has weakened, time is even more of the essence and Eskom has indeed become the biggest threat to growth.

The shock escalation in load shedding in March, following a mild (although also unexpected) period in the last quarter of 2018, has materially increased downside growth risk. It is difficult to incorporate or make allowance for unprecedented uncertainty in an economic forecast, specifically the risk embodied by Eskom, which is clear and present, but unscheduled and prone to randomness.

The direct impact on numbers at this stage is limited by the relatively short period of actual Stage 4 outages. Anecdotal evidence suggests large users had the capacity to mitigate most of the impact associated with unscheduled outages and managed production accordingly. Some users could protect core operations using generators (which still cost more), while small and medium enterprises are likely to have been most affected by production downtime, stalled supply chains, a backup in inventories and weak sales. However, historic data show only a loose relationship between blackout periods and a change in retail sales volume.

The broader impact on the fiscus, should more financial support be needed, and importantly on sentiment is harder to estimate. However, it seems reasonable to expect further delays in any planned capex, and disruptions to consumption. We remain very concerned that the escalation in March load shedding reflects a significantly more decrepit underlying generation fleet than previously assumed and that the prospects of stabilising long-term energy availability and the associated cost are all unknown. This will have a material impact on sentiment, and such aggravated uncertainty is the enemy of growth.

Past periods of failing energy production and rolling blackouts have reduced GDP by 0.2 to 0.4 of a percentage point. These periods were prolonged relative to what we have seen now, although the recent load shedding was even more severe. Experience has also improved communication between users and Eskom, with some corporates better prepared to mitigate the impact on production than before. 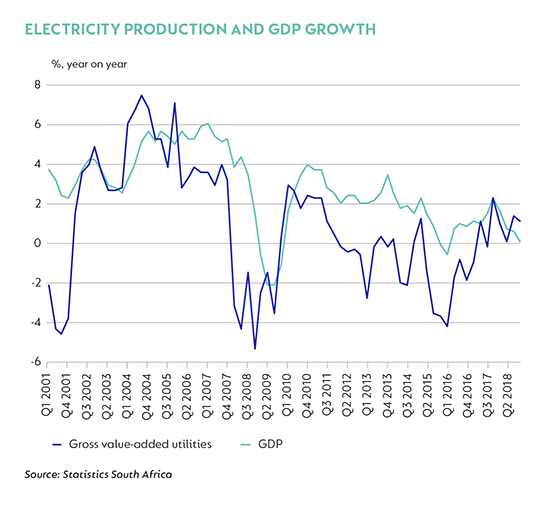 For now, we have shaved 0.3 of a percentage point off our 2019 GDP estimate, and lowered the 2019 and 2020 estimates to 1.3% and 1.7% respectively. There is still downside risk to these numbers, but until we have better information about Eskom’s future supply and actual impact from hard data, we are reluctant to extrapolate this relatively short-lived, although severe and alarming, episode.

The domestic economy grew 0.8% in 2018, in line with our expectation and the poor average GDP of the past decade. Within this, consumer spending was the biggest contributor, with real household spending up 1.8% year on year (y/y), but slower than 2017’s 2.1%. Government added at the margin, but this was disappointingly offset by outright contractions in gross fixed capital formation, net exports and a large drawdown in stocks. 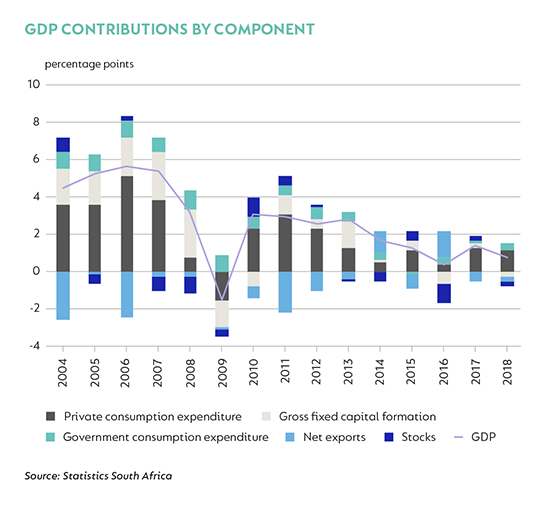 The outlook for consumer spending is still critical to any improvement in activity in the year ahead. In this regard, the publication of full-year GDP data held several negative surprises. Most important was a significant revision to the underlying estimates for compensation. Compensation and employment are the biggest drivers of consumer spending, in turn 60% of GDP. In the last Corospondent, we flagged the downside risk to spending due to a slowing in compensation. New data show that household compensation indeed slowed – in nominal terms – to 4.1% y/y at the end of 2018. This is the lowest ever since 1994 and represents an outright inflation-adjusted contraction of 0.8% in both the third and fourth quarters of 2018. This is a deeper contraction and more prolonged than we saw in the depths of the crisis in 2009 when formal employment fell 5% from the 2008 peak. 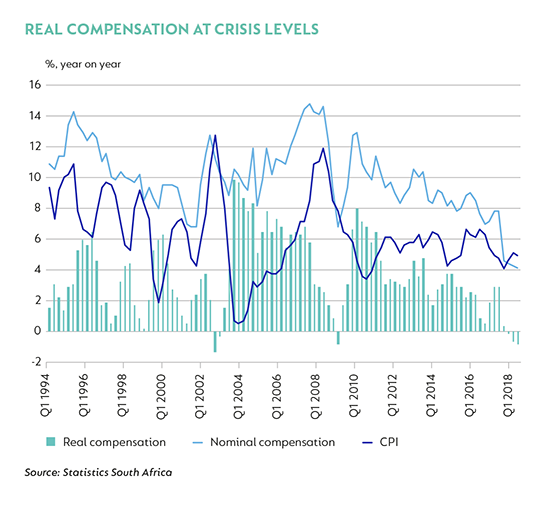 This massive deterioration in spending capacity not only reflects weakness in employment, but very constrained economic circum­stances – compensation data capture salaries, overtime and bonuses, and pressure on all avenues of earning ability reflects an overall exceptionally constrained economy. While this is a ‘backward-looking’ data point, it not only explains a considerable amount about the bleak retail environment of the past year, but also represents a considerably weaker starting point from which households are operating.

Credit extension to households has picked up, providing a boost to spending late last year. We expect this to continue and look for a stabilisation in nominal compensation growth this year. Low inflation should assist stability in real disposable incomes, although rising fuel prices and the possibility of higher food inflation are an additional risk as the year progresses, particularly if employment and compensation remain under pressure. Overall, we think household spending will grow 1.9% y/y in real terms in 2019 and accelerate to 2.5% in 2020.

We have never counted on an acceleration in capital investment over our forecast period. This is typically a late-cycle phenomenon in South Africa, and we believe there are still binding structural and cyclical constraints on investment. This remains the case, although the downside risk (off a weak base) has increased materially with Eskom’s failing fleet.

Consumer inflation remains low, printing 4.5% y/y in March, following benign 4.1% in February and 4.0% in January. The acceleration in March mostly reflects the rise in retail fuel prices and Budget-related implementation of various taxes. However, behind the March headline acceleration was a very sharp drop in rental and owners’ equivalent rent (OER) to 3.5% y/y and 2.6% y/y from 4.2% y/y and 3.5% y/y, respectively. Rentals are typically slow-moving, and the sharp deceleration reflects a very constrained consumer and housing environment. With food inflation and 2.3% this further moderation in rental (services) inflation provide a large anchor for headline CPI, which we expect to average 4.7% in 2019 and 5.3% in 2020. 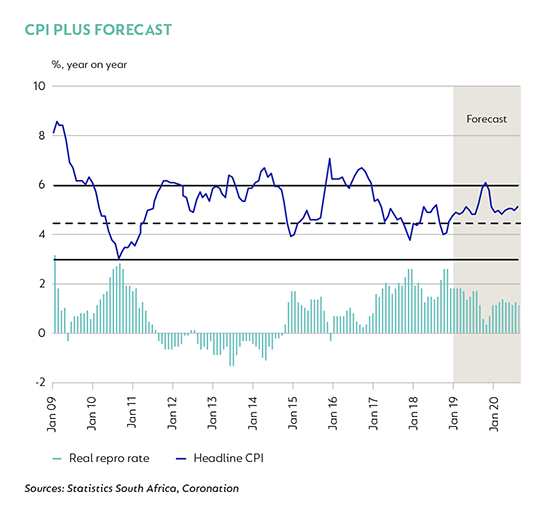 The March Monetary Policy Committee meeting resulted in a unanimous vote to leave the repo rate unchanged at 6.75%, and detailed a downwardly-revised 2021 CPI forecast at 4.7%, from 4.8%. Within a low domestic growth, globally benign context the MPC is in a more comfortable position as it assesses the outlook for inflation than before. A moderation in inflation expectations has help reinforce more moderate forecasts. By mid-year, data confirming weak GDP data for the first quarter of 2019, which could be negative sequentially, low inflation and some possible compositional change within the MPC may well see some members consider cutting the policy rate at coming meetings. For now, our base case remains that the repo rate will be unchanged through the end of the forecast horizon, allowing the already accommodative stance to increase as inflation rises moderately.

The February Budget presented a worse set of fiscal data than we had expected. The fiscal deficit was revised larger, reflecting weaker revenue outcomes and greater support for Eskom than expected at the time of the Medium-Term Budget Policy Statement in October. Provisional financing data released by the South African Revenue Service (SARS) for the end of the fiscal year showed a R14.6 billion shortfall relative to the Budget expectations and a R57 billion (1.2% of GDP) miss compared to the Budget in 2018. It also implies that the 2018/2019 consol­idated deficit will widen relative to the -4.2% of GDP Budget expectations.

Looking ahead, it is uncertain whether committed support for Eskom will grow, given the unknown outlook for the entity. On the revenue side, weaker growth may well put pressure on projections, although we are hopeful that efforts to rehabilitate SARS and the permanent appointment of a new Commissioner will offset some of this risk.

Moody’s, the only ratings agency with South Africa’s sovereign rating within investment grade, did not review the rating in March and maintained an unchanged rating at Baa3 (stable). This provides a near-term reprieve, although downside risks for both growth and the fiscal position suggest that a ratings action in due course remains a considerable risk.

THE ELECTION AND STRUCTURAL REFORM

The 8 May election outcome may provide President Cyril Ramaphosa with a decisive win and a stronger mandate to appoint a Cabinet better equipped to change the tone and focus of economic policy. Almost regardless of the outcome, we still expect the President will try to ensure that key economi­cally systemic ministries are headed by capable people and that this, combined with interventions at key institutions, should help provide some stability where uncertainty in the past has been deeply detrimental to growth.

A coordinated vision of the ANC’s election manifesto, which aims to transform the economy through job creation, sustainable land reform and addressing anticompetitive corporate concentration, is necessary to encourage investment. While we expect Eskom’s role as the country’s sole energy provider to diminish over time, the way in which government manages the crisis will give us some insight into its broader capacity for reform. A clear signal of the administration’s ability to deliver a new vision for economic policy will not just be its ability to stabilise the entity in the short term, but having a clear, decisive and far-reaching vision for long-term energy supply as well as making the political decisions this entails.