Would you dismiss investing in other emerging markets because you already have investment exposure here at home in South Africa?

If your answer is yes then read on, because local investors who steer away from investing in other emerging markets may be doing themselves a disservice.

As a start, don’t let historical biases put you off investing in other emerging markets

Throughout the 2010s, there were long periods when moves in emerging markets currencies, which include the rand, were highly correlated. Given our history of foreign exchange controls, many investors therefore concluded that it’s a waste using up scarce global exposure to invest in other emerging markets.

It is true that, as a South African investor, your access to global investment opportunities are still normalising. While government continues to liberalise exchange control, some restrictions remain. However, the correlation between emerging market currencies broke down in 2020, primarily in response to much better management of the Covid-19 pandemic in Asia. In addition, increasing political instability in some of the major developed democracies have further undermined the popular notion that developed markets are the only option if you are looking for stability and uncorrelated investment returns.

Here are reasons why you should consider a healthy exposure to emerging market assets, specifically equities, in your global portfolio:

Also, many industries in emerging markets are not as developed or consolidated as their equivalents in developed markets, which gives them longer runways for earnings growth. Given local political and cultural requirements, local champions are more likely to remain the big beneficiaries of technological disruption in their home markets.

Back when Coronation launched its first emerging market fund in December 2007, more volatile commodity-producing countries heavily dominated the emerging market universe, with energy and commodities making up more than 40% of the index market capitalisation. Brazil alone made up 16% and was the largest country in the index. Now, however, the combined weight of China, Taiwan, Korea and India – none of which are particularly commodity dependent – are almost 75% of the total emerging market universe.

Putting all these factors together, we believe there is a convincing argument in favour of including emerging markets in your global investment exposure mix.

Investing in emerging markets through the Coronation Optimum Growth fund

You can gain access to emerging markets through investing in Optimum Growth, a long-term portfolio of the best investment ideas Coronation can find around the world. The fund is unconstrained, so it can invest anywhere in the world and across all available listed asset classes. It currently has 70% exposure to equities, which in turn consists of 45% emerging markets and 55% developed markets.

Optimum Growth is managed by an exceptionally accomplished investment team, which decides on the optimal allocation between growth and income, as well as emerging and developed market assets. The fund is aggressive and aims to achieve a long-term return of at least 5% above inflation, so it is best suited to those investing for periods of 10 years-plus and willing to deal with a higher level of risk than a classic 60/40 global equity/bond multi-asset portfolio. The fund’s average historical equity exposure was between 70% and 80%.

So you shouldn’t expect this fund to deliver a smooth double-digit annual return, but, if you are seeking meaningful real wealth creation and you are patient, then Optimum Growth could be the right fund for you. Here is how it has performed over time:

More than double the index over 20 years

Investors who have remained in Optimum Growth since its launch in 1999 have achieved returns more than double that of the MSCI World Index as at end September 2000. As the fund marks its 21st birthday this year, it’s certainly something for them to celebrate. 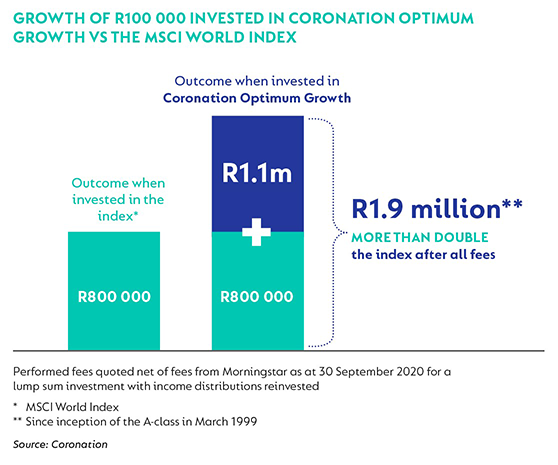 Can this performance be repeated for investors over the next two decades?

The same factors that have driven the remarkable performance of Optimum Growth remain in place at Coronation today. For 27 years, the company has remained single-minded in the pursuit of creating wealth for clients, while responding to ever-changing market conditions with acuity. Active long-term investing is about focus, agility and conviction. While no-one can predict the future, when it comes to investing, you can prepare by building robust and resilient portfolios.

To find out more about investing with Coronation, visit www.coronation.com

The information contained in this article is not based on the individual financial needs of any specific investor. Reference to specific funds should be read in conjunction with the Minimum Disclosure Documents available here. To find out more, speak to your financial adviser.