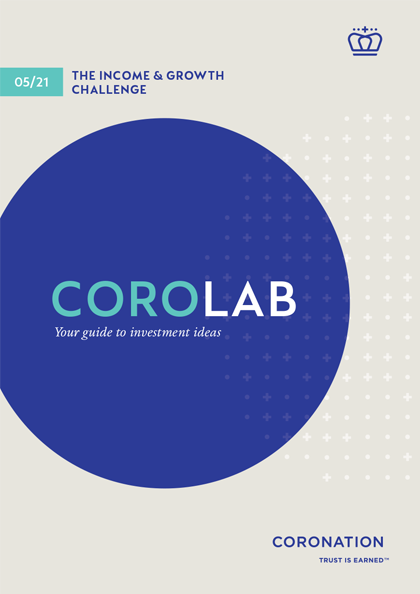 The income and growth challenge - May 2021

Is it possible to manage these risks in retirement? - May 2021

You need to normalise your risk exposure

For the past five years, returns delivered by the low to medium risk multi-asset category (those funds being managed to specifically meet the needs of living annuity investors) have not met their inflation-plus return targets. While those returns were ahead of inflation, the funds underperformed more conservative portfolios (those without any exposure to growth assets) over the same period.

While this strategy to de-risk may have worked over the past five years, cash yields today (at 3.5%) are roughly 3% lower than they were in 2019 (see table below). At the same time, longer bond yields have increased, meaning that we have seen a dramatic steepening of the bond yield curve. This was partially driven by the policy response to the Covid-19 crisis as well as the impact of the lockdowns on the local economy.

Some investors may think that investing a portion of their capital in a dedicated bond fund is a sure way to increase the yield and, therefore, total return, of their portfolios. However, in doing so you also introduce significant duration risk to your portfolio. Those already in retirement could consider an allocation to guaranteed annuities as a safer way to gain access to the higher yields offered by long bonds.

The potential problem for these investors over the medium to long term is that if you are not invested in real assets and inflation starts to tick up, the effect on your savings will be dramatic over time.

Most retirees are invested in funds where the base rate is the cash yield rather than the long bond yield. As a result, they are not necessarily well positioned for the market environment that we are facing today. In fact, we believe that many retirees are actually set up for yet another return disappointment over the next five years given the change in return expectations on both sides of the risk spectrum. 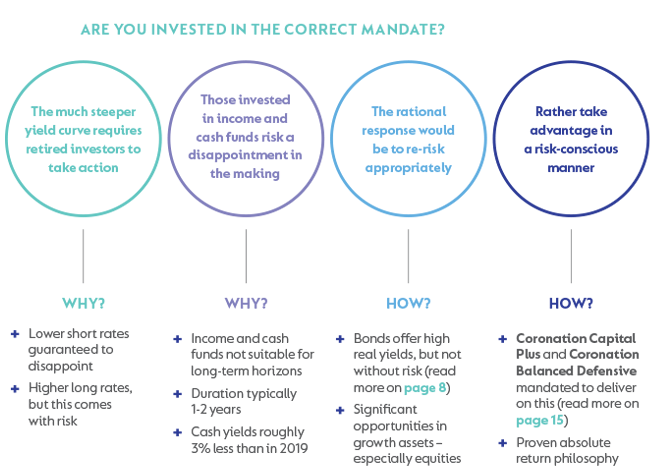 Why you need growth assets in the fight against inflation

The following graph demonstrates how, in the fullness of time, the benefit of having reasonable exposure to growth assets becomes clear for income-drawing investors. The chart tracks living annuity investments in two Coronation funds: the conservative managed income fund, Coronation Strategic Income, and our moderate risk income and growth portfolio, Coronation Capital Plus.

Each shaded section shows the range in which your living annuity balance would have moved for starting drawdown rates of 2.5% and 7% a year respectively. The analysis is for the period July 2001 (when both funds were launched) to 31 March 2021. Over this period, the average money market fund returned 7.7% p.a. (after fees), while Strategic Income delivered 9.8%* (after fees) p.a. Capital Plus returned 11.4%* (after fees) p.a. over the same
period. (Source: Morningstar as at 31 March 2021). 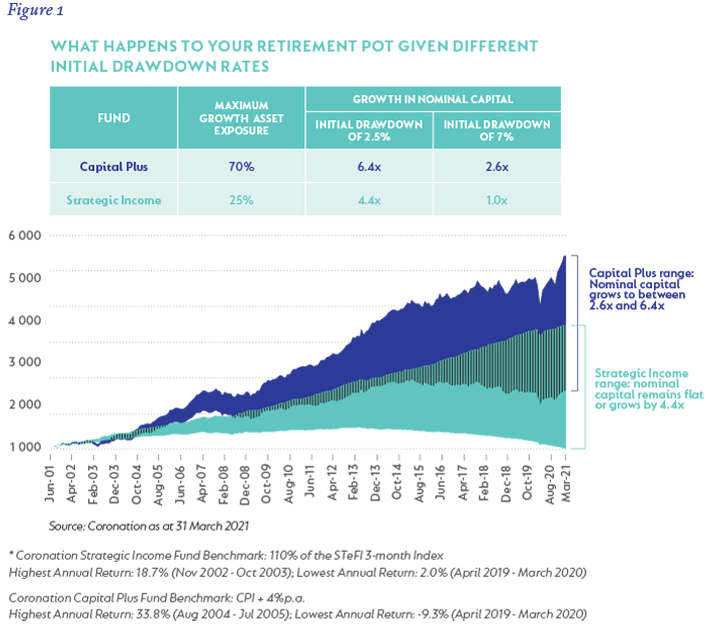 This further illustrates the crucial role that growth assets fulfil in providing protection against the eroding effects of inflation. The chart on page 10 also shows how sensitive the capital value is to the starting income drawdown rate. Withdrawing a high rate of income at the start of retirement can have a significant impact on the life of an investment. In the following section, we provide more detail on selecting a prudent initial income drawdown rate.

You need to select a prudent initial income Drawdown rate 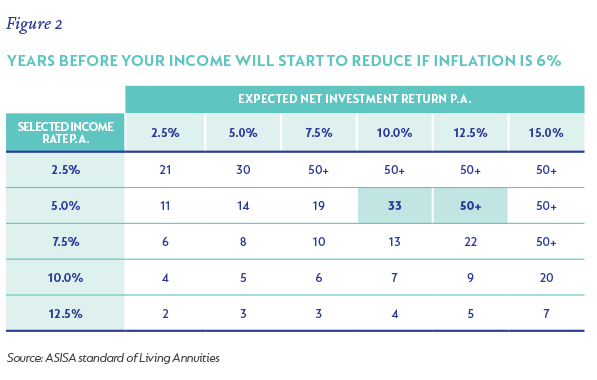 Each cell represents the number of years before income (adjusted for inflation of 6%) will start to decline. Another way to think about this is how many years you have before your standard of living will start to decline in the different scenarios. At a rate of return of 10% p.a. (historically Coronation Capital Plus achieved 11.5% p.a. since inception), any initial income rate up to 5.0% represents a sustainable income, as it will take roughly 33 years before one reaches the maximum drawdown ceiling of 17.5% p.a. in your living annuity. However, note what happens when the expected return drops by 2.5 percentage points to 7.5%: the period of sustainability drops dramatically from 33 years to 19 years at the same drawdown rate of 5.0%.

This illustrates how sensitive income sustainability is to an investors’ expected return. Given our current outlook for financial market returns, it would be less than prudent for most retirees to consider initial income drawdown rates much above 5% (and then only from a portfolio with appropriate exposure to growth assets.)