IT IS WIDELY acknowledged that South Africa’s fiscal position is precarious. Debt stock had more than doubled from a nadir of 26% of GDP in 2008 to 65.3% in 2019/2020. The Covid-19 crisis has pushed this to c.80%. The dynamics at play, including a now-large stock of debt, low rates of nominal growth, excessive expenditure relative to revenues and stubbornly high borrowing costs, mean that South Africa may not be able to contain the rise in debt and that the cost of servicing it will likely become over­whelming. There are active market debates about the ultimate risk of default. Assuming past trends remain unchecked, this is a very real risk.

THE SUM OF THE PARTS

Fiscal arithmetic shows that the rate at which a country accumulates debt is a function of the starting stock of debt, the nominal cost of debt relative to nominal GDP growth, and the govern­ment’s primary balance, which measures non-interest expenditure allocation relative to revenue. When the starting stock of debt is low, the most important variable in stabilising debt is the primary balance.

Running surpluses here has a strong influence on debt accumulation. When the starting stock of debt is high, as it now is in South Africa, then the difference between the cost of that debt (interest) and the growth rate of GDP has the bigger influence (*see the debt accumulation equation at the end of the article). If the cost of borrowing consis­tently outweighs the rate of GDP growth, deficits remain high as borrowing increases to meet the shortfall and service the debt. 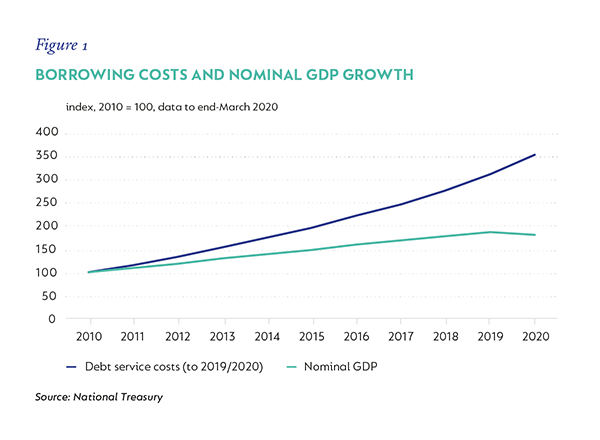 Part of the problem is that South Africa’s fiscal position has been deteriorating for a long time. This isn’t just a ‘Covid-19’ deficit and debt surge, as is the challenge in many other countries. Covid-19 just made things much worse. The drivers of fiscal dete­rioration come from policy choices and economic outcomes that started a decade ago. These include:

VERY DIFFICULT TO TURN THE SHIP, BUT NOT IMPOSSIBLE

Rectifying the balance between nominal growth and borrowing costs is key to stabilising govern­ment’s debt position. Firstly, it really is about growth. While scepticism is well justified based on past performance, on this front there have been some encouraging developments.

We are seeing a resurgence in global growth, trade and commodity prices. Against this backdrop, South Africa should enjoy some lingering effects from accelerating global growth, which has been the biggest driver of domestic growth for a long time**. As activity picks up in the second half of 2021, this potentially offers a considerable near-term lift for domestic export growth and in longer-term revenues.

There is also some evidence that the process of capacity destruction that was State capture has slowed. In part, this reflects the diligent efforts of those who have exposed the malfeasance at certain SOEs and the ensuing inquiries, and in part the fact that this process inhibits ongoing malad­ministration. Certainly, these issues have not been fully or effectively dealt with and the lingering cost is still with us, but the change should be less growth detractive, supporting rather than under­mining confidence.

Growth and revenue outcomes have been better than expected (off a very weak forecast base), which improves the starting position. The South African Revenue Service announced a R38 billion tax overrun compared to the February Budget forecast, all equally implying a main budget deficit closer to -11% of GDP than the National Treasury’s -12.3% forecast.

Fiscal consolidation – albeit slow, painful and still uncertain – is under way. Much hinges on the wage settlement for coming years and an asso­ciated legal process, but the intent signaled by last year’s wage freeze and this year’s commit­ment to future wage constraints is a significant break with past practice. There is more to be done, but it is a start. Despite these efforts, the cost of debt/growth dynamics remains under pressure, and South Africa’s borrowing cost is higher than just about anywhere. Figure 2 illustrates that this has been the case for some time, in line with the dete­rioration in fiscal dynamics. 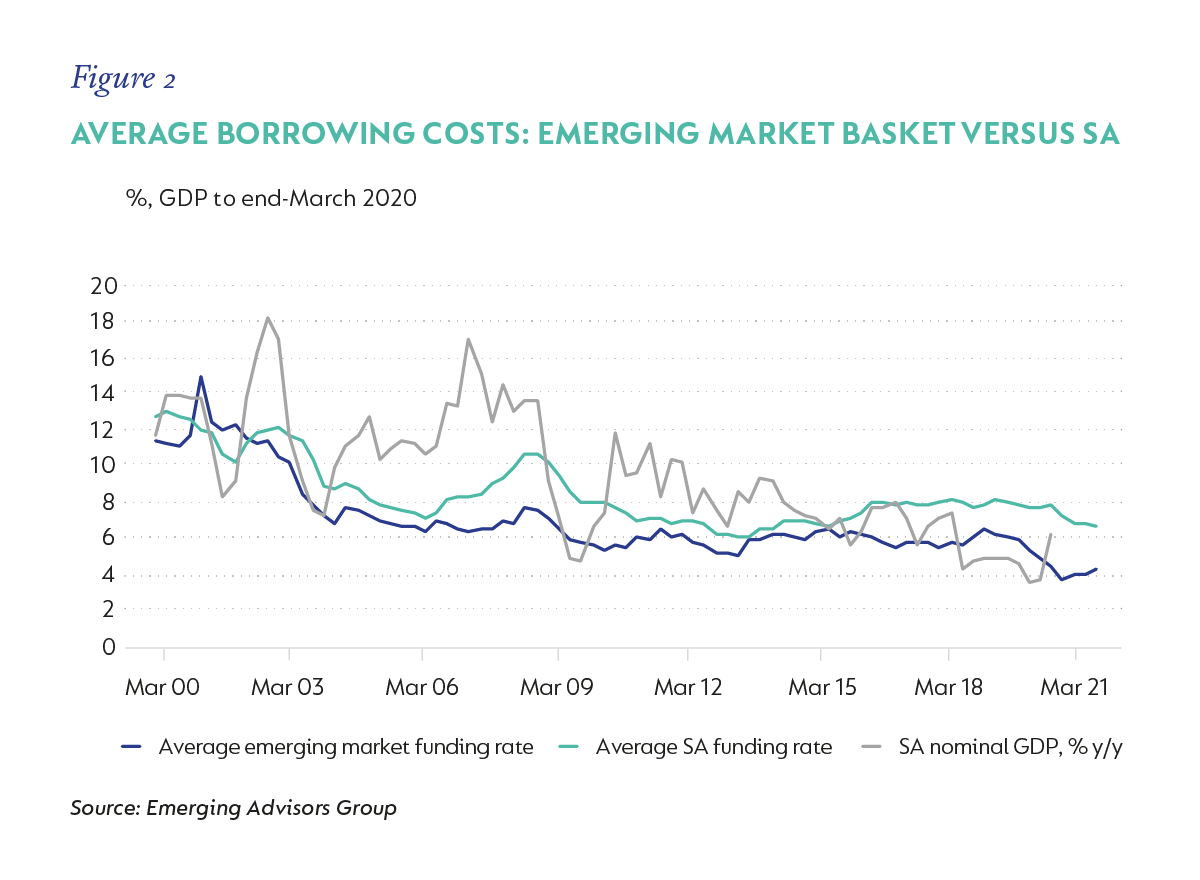 NOT ALONE, YET VERY ALONE

The Covid-19 shock brought a step change to most governments’ fiscal positions around the world. As the pandemic threatened lives and livelihoods, governments implemented unprecedented fiscal support to contain the social and economic fallout. A massive combination of tax, income, health and poverty support, coupled with a collapse in revenues, saw global government deficits balloon in 2020. The effects are expected to linger in coming years as policy support is withdrawn at a staggered pace, and large deficits will need to be funded.

Conventional financing options for such a large fiscal shock are limited. Governments usually have two basic ways in which to finance deficits: raising taxes, or borrowing and raising debt. However, given the sudden need for massive funding, a third, less conventional option has also become popular: central bank financing.

The official wording around these interventions is broadly consistent, although scope and design vary by country. With policy rates at or close to zero, the broad aim is for a central bank to use its balance sheet to increase demand for government debt to meet the increase in supply (and in some cases, other financial assets), providing funding, creating broader liquidity, lowering borrowing aggregate costs, and encouraging credit lending and growth.

Most developed economy central banks have implemented policies with these broad objectives. According to the IMF, 27 emerging market central banks (including South Africa) also implemented successful asset purchase programmes during 2020. Some of these interventions were short-lived, while others have been extended, facilitating lower funding costs – even for emerging markets that might be perceived as riskier credits due to high initial levels of debt and less conventional funding practices.

Unsurprisingly, there are ongoing calls for the South African Reserve Bank (SARB) to reinstate the asset purchase programme it used in mid-2020, hopefully to achieve the same effect. The SARB has provided relatively little financial support to the government through the crisis, and it seems reasonable that there is capacity to do more – especially given the successes seen elsewhere. Figure 3 shows that, while government has drawn down deposits with the central bank, the govern­ment still holds cash and other deposit buffers with the SARB. 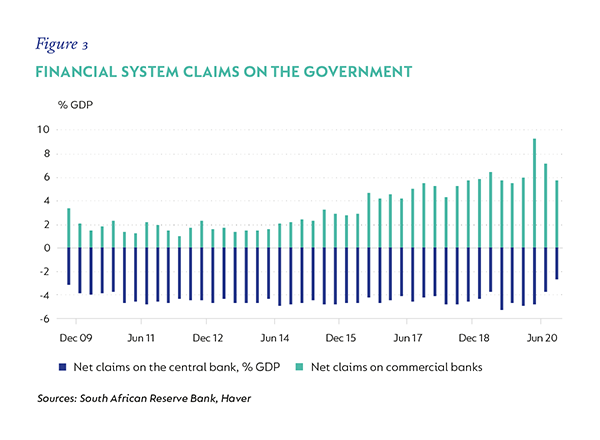 However, it is deeply uncertain whether such an intervention could successfully and sustainably lower the cost of funding, and here’s why – the countries where these programmes have achieved lower long-term interest rates share at least some common features:

THE FACTS OF THE MATTER

What makes this challenging for South Africa is that we currently share only two of these require­ments. We have low inflation and a credible central bank. As mentioned, the country’s fiscal deterioration is not just a function of the impact of the pandemic; it is the accumulation of years of weak fiscal and economic performance, which means our starting position is fragile and fiscal credibility is poor. Rising yields reflect this long deterioration in sovereign risk.

This means that neither the government nor, presumably, the central bank, can commit to a ‘finite’ intervention – and the market knows it. Because of this, any intervention wouldn’t look like a ‘Covid-19 funding strategy’; it would more likely reflect a central bank that is funding infinite issuance by a government previously unable or unwilling to effectively manage expenditure. The SARB’s important credibility would easily be lost.

As shown in Figure 4, with still-heavy foreign posi­tioning (foreigners own 29.9% of marketable South African bonds), it seems likely that such action would cause foreign investors to divest and stay away, sharply weakening the currency. This would severely limit future funding options and may even accelerate the political temptation to implement domestic regulatory changes which could require local funds to hold a greater propor­tion of government debt. The chart also shows that in other emerging markets, the often state-owned banking sectors play a larger role in funding the government.

This policy option is also unappealing from the SARB’s perspective. Unlike many of the countries referenced here, policy rates in South Africa are not at a lower bound. At 3.5%, the SARB could cut further if it were deemed appropriate. With the market functioning normally – albeit at elevated yields – and the National Treasury on a comfortable cash cushion for now, there is little need to intervene to ensure financial stability – as it did in 2020.

Further, high yields are a reminder to the govern­ment of the cost of its profligacy, and the need to reform. Governor Lesetja Kganyago has said before that the SARB will not take responsibility for solving the problem of fiscal sustainability, and certainly not at the risk of its very hard-won credibility.

There are also other ways to help lower borrowing costs, including a more flexible funding strategy. Government has already lowered the average cost of borrowing in 2020 relative to the previous year (and despite spiking yields) by issuing more Treasury Bills closer to low policy rates and utilising low cost foreign loans.

This is not a feasible strategy for many emerging markets, but in South Africa’s case, with a long period of prudent asset and liability manage­ment and the very long average maturity of its debt stock predominantly in local currency, it could implement this strategy comfortably for a limited period. The introduction of other financing instruments, with flexible rates and maturities that fall between the large bond issues, may also take pressure off the overall financing bill.

Until the underlying inhibitors to lower funding costs are decisively managed, investors will remain concerned about the sustainability of the fiscal position, and will price associated risk appropriately. It may well happen that markets lose faith in government’s ability to service its debt in full and on time, and, in the event of a financial crisis, the SARB will have to step in.

But the only durable solution is a permanent consolidation of the deficit and a visible improvement in domestic growth outcomes. We are some way along in redirecting the ship. Growth and revenue performance for 2020/21 has been better than most expected. As shown in Figure 5, this raises the base and makes the starting position a little less onerous. 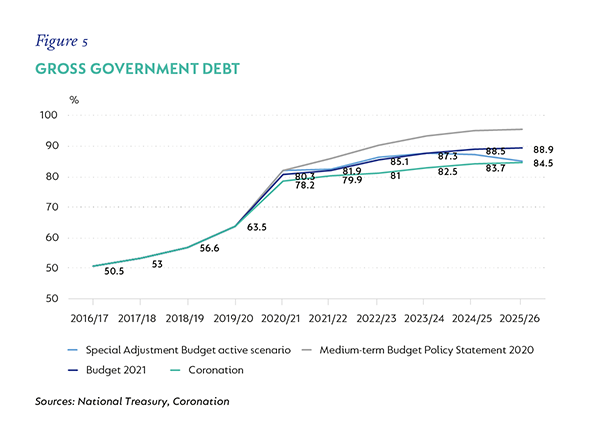 The year ahead should see strong nominal growth possibly in excess of nominal funding costs), good revenue gains and a smaller deficit than the National Treasury is currently forecasting. If some of this momentum is sustained, the debt trajectory will be lower, and shallower, than many expect. This is some comfort, but more needs to be done. The ship is not yet decisively on a new tack.+