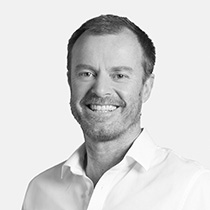 Global equity markets (as measured by the MSCI All Country World Index) were weak during the first quarter (Q1-22), falling 5.4%. The S&P 500 Index outperformed the global index, and both emerging markets and Europe underperformed; the latter performing more poorly post Russia’s invasion of Ukraine in late February. Inflation surprised to the upside, with US CPI reaching 8.5% at the end of March, preceding rapid increases in interest rates. The US 10-year government bond yield rose from 1.5% to 2.3% in the quarter. The bond market fared even worse than equity markets, with the bond index (Bloomberg Barclays Global Aggregate Bond Index) declining 6.2% in the quarter.

Against the backdrop of weak equity and bond market returns, the Fund declined -4.2% in Q1-22, outperforming the benchmark by 1.4%, but not yet sufficient to recapture the underperformance of the second half of 2021.

For the quarter, the primary contributors to return were:

Anthem and UnitedHealth, the US health insurers, were both positive contributors to performance during Q1-22 as several market fears proved unfounded.

First, concerns about increasing medical loss ratios (medical costs as a percentage of revenue) were allayed. Both stocks benefited from the decline in Omicron infection levels during the quarter and intra-quarter commentary from Anthem that medical costs were developing better than their internal expectations. Should any significant unexpected pent-up medical procedure demand emerge, the insurers can reprice their business over the coming years and we would expect little impact on the long-term earnings power of these businesses.

Secondly, at the same conference appearance Anthem reiterated that they were seeing one of their best commercial enrolment seasons ever, further evidence that its strategy of reinvesting into benefit structures and product offerings under CEO Gail Boudreaux is delivering results.

Finally, the health insurance stocks also appeared to benefit from a rotation away from growth toward defensive stocks. Medical spending in the US has remained resilient during past periods of economic dislocation. The health insurers’ earnings stream is thus largely, albeit not entirely, disconnected from the economic cycle. They are also modest beneficiaries of higher interest rates due to the large statutory capital and insurance float balances they hold to cover medical claims payable, upon which they earn interest income.

The principal near-term risk is the looming Medicaid enrolment reverifications that will occur once the public health emergency in the US is declared over. Reverification is the process to ensure that only those eligible for Medicaid are enrolled in it. The companies were allowed to delay reverification during the pandemic to assist citizens through the difficult period. Medicaid is a sizeable business for Anthem, but its diversified presence across all health insurance segments should see it recapture its fair share of lost Medicaid enrolment, potentially at more attractive margins.

Given the strength in the stocks, the margin of safety has reduced, but we believe they still offer attractive compounding long-term returns, with earnings expected to grow in the low- to mid-teens per year over the medium term.

Auto1 was a significant detractor in the quarter. However, the strategic progress of the business has been sound since its IPO.

To illustrate, revenue and gross profit grew by 69% and 51% respectively in 2021. Auto1 sold 597 000 cars during the year, making it the biggest trader of cars across the European Union (EU). That said, their current market share of EU wholesale and retail unit sales is only 2%, which highlights the significant long-term growth opportunity in a large and highly fragmented market that is ripe for disruption. The CEO, who is also a founder of the business, targets a 10% market share long-term.

Growth was especially strong in Autohero which is Auto1’s recently launched consumer-facing online used car retail platform. Giving consumers the confidence to buy used cars online is key to unlocking the significant long-term growth potential, given that online 1% of consumers make online purchases of cars in Europe, making used cars one of the last frontiers for online retail. Autohero unit sales increased by 308% in 2021, with the company expecting volumes to double this year. Unit economics are also improving. Gross profit per car increased by 64% last year to €362 but there is still significant runway for further improvement. Guidance for Q1-22 gross profit per unit is €700. Its Net Promoter Score (NPS) increased from 53 to 69 during the year. The improved unit economics and NPS give us confidence that Auto1 is on the right track to unlocking the opportunity ahead of it.

Auto1 is currently loss-making at the group level, given the significant investment in marketing and the Autohero business’ in-house refurbishment. Both are bearing fruit, with brand awareness growing strongly and the company seeing cost savings of 30% from refurbishing in-house rather than through external vendors – a key driver of the GPU improvement. The company is well capitalised (€721m net cash), which provides the necessary firepower for the investments phase. Auto1 guided that it will reach EBITDA breakeven by the end of 2023 due to the benefits of its growing scale and ongoing improvement in unit economics.

Auto1 is a long duration asset, but one that is solving real problems: lowering prices for consumers and dealers and dramatically improving the consumer experience of purchasing used cars. We think it is attractively valued, with significant upside at current prices.

At quarter-end, the Fund was positioned as follows:

We have sought to construct a fundamentally diversified portfolio with a tilt towards inflation protection, as can be seen in the Fund’s skew to growth assets and lack of exposure to developed market nominal bonds. Our view is that high government debt levels and low interest rates have created a poor risk-reward trade-off in nominal developed market government bonds, which make up 60% of the fixed income component of the benchmark. The risks in this asset class have become more evident in the quarter as inflation has surprised to the upside and nominal bonds have rapidly repriced.

Thank you for your continued support and interest in the Fund.

Please note that this is for the retail version of the fund. View the Global Managed Fund page