No group of companies plays to India’s strengths and circumvents its weaknesses like its Information Technology (IT) services providers. India has an ever-expanding pool of English-speaking graduates which provides the staff that the IT services industry needs at reasonable salary levels, while the nature of its outputs is such that they can be transmitted electronically or via a telephone line to clients all over the world, consequently side stepping the infrastructural bottlenecks that have plagued many of India’s other industries.

The Indian IT services companies mainly serve the US, and to a lesser extent Europe and clients from India. The model works as follows: 80% of their employees are situated in India (offshore) and the remaining 20% work onsite at the client’s premises, although a large number of these are Indian nationals who are in the US on long-term visas (H-1B visas). It is for this reason that they are called ’offshorers’; however, the line between them and traditional IT services companies, like IBM and Accenture, is becoming increasingly blurred.

In the past, clients would have awarded simpler assignments to the ‘offshorers’, but as these have gained track records and credibility so the complexity of the projects awarded to them has increased. The traditional IT services companies have also tried to move as many jobs as possible out of the US to benefit from the labour cost arbitrage that exists between India and the US; the annual salary of a newly qualified engineer is $8 000 in India versus $55 000 in the US. Today, 30% – 35% of IBM and Accenture’s global workforce are situated in India which translates into a headcount in India of almost 150 000 employees in IBM’s case. 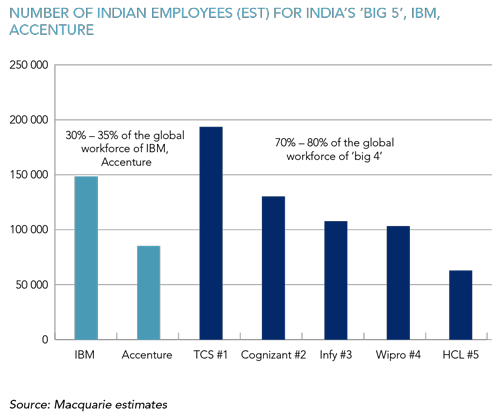 Apart from its importance on the domestic front, India’s IT services industry is increasingly important from a global perspective. Not only does India have a 58% market share in the global sourcing industry but it is also a crucial link in the IT services supply chain as it produces the largest number of globally employable engineers in the world – 87 500 per annum (versus only 56 700 in the US, and 60 000 in China).

Unfortunately, India’s IT industry has proved to be an easy scapegoat for US regulators against the backdrop of high unemployment in the US. This is despite the fact that IT skills remain in relative short supply in the US, which is evidenced by the fact that IT wages are rising at a faster rate than inflation in a weak economy.

A number of regulations have been proposed which directly target ‘offshorers’ (companies with a greater portion of their US employees on H-1B visas). These include increasing the cost of applying for a H-1B visa as well as preventing people on H-1B visas from working on client premises. As a result, the share prices of many of the ‘offshorers’ have fallen, allowing us to increase our stake in them at attractive valuations.

While there is no doubt that regulatory risk associated with ‘offshorers’ has increased as a result of these developments, there are a number of mitigating factors. Firstly, it is by no means a given that the proposed bill will clear both the senate and the house in its current form. Secondly, even if the bill were to be passed, it will only have a greater impact on the ‘offshorers’ in the short term. Long term, IT personnel costs will rise for everyone as the supply of IT skills in the US will be reduced. Furthermore, ‘offshorers’ may be better placed than most to manage this increase as they are able to adjust the ratio of offshore personnel to onsite personnel.

Looking ahead, we expect the revenue lines of the ‘offshorers’ to continue to grow robustly as they offer a good value proposition for their clients. If one takes the top 10 vendors in the world, five Indian and five traditional, the Indian vendors had 13% market share four years ago; today they have 22%. Tata Consultancy Services (TCS), the largest ‘offshorer’, still generates less than a fifth of the revenues of an IBM. Double-digit revenue growth should also translate into double-digit bottom-line growth as we expect margins to remain stable over the long term. 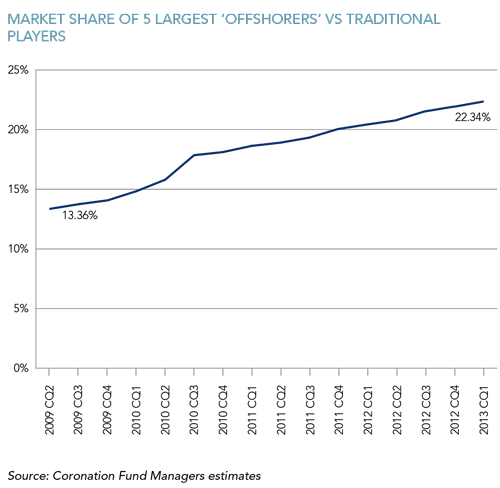 The five largest Indian IT services providers are TCS, Cognizant Technologies, Infosys, HCL Technologies and Wipro. Four percent of the Coronation Global Emerging Markets Fund is invested in the IT services companies: 3.24% in Cognizant and 0.74% in HCL Technologies. Cognizant trades on a forward PE of 12.6 times, excluding the company’s net cash position, and HCL on a forward PE of 12.3 times, excluding the net cash. We like Cognizant’s policy of reinvesting in its margins to enhance the value proposition it offers its clients and HCL’s focus on lower margin but lower risk infrastructure business.

Kyle wales is a member of the emerging markets team responsible for analysing financial, retail and telecommunication stocks. He joined Coronation at the start of 2008. Kyle is a Chartered Accountant (SA) and CFA charter holder.