A look at small cap shares

If you had invested in the small cap index some 15 years ago, your investment would have grown 11.8% per annum; not too far off the 12.6% per annum return delivered by the overall market over the same time frame. But within these 15 years small caps had many phases of dramatic out and underperformance of the market. 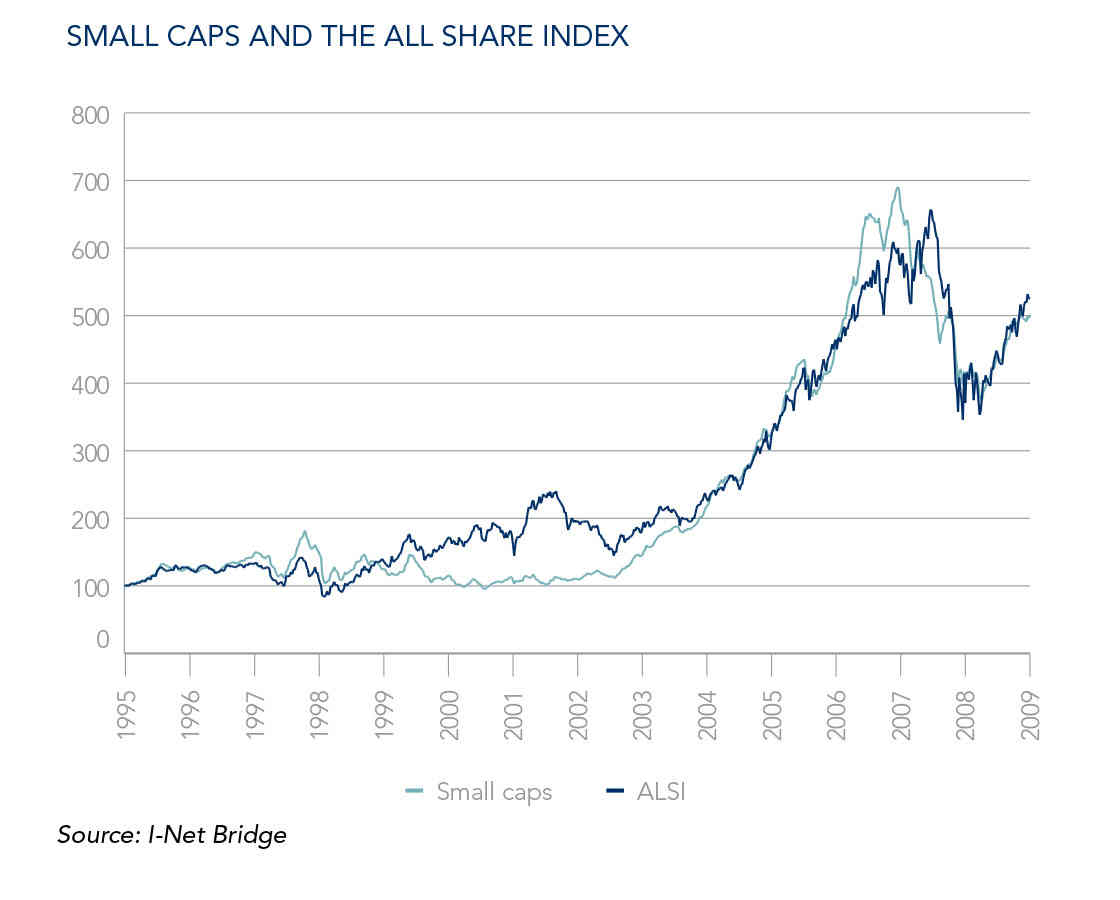 So, why the volatility? Why do small caps go from being loved by investors to completely ignored? Generally, this question has one of three answers, or a combination
thereof:

The most important driver of share prices is earnings. Looking at the orange line in the chart below, one can see how volatile the earnings of the small cap index have been. This is the most important reason why small caps are generally more volatile than other larger stocks. Interestingly mid caps have shown remarkably consistent growth in earnings relative to small caps and the top 40 shares. The primary reason for this is that the level of the rand is a big driver of the resource-heavy top 40 index, whereas the mid cap index is dominated by retailers and other South African businesses whose earnings are little impacted by the level of the rand. 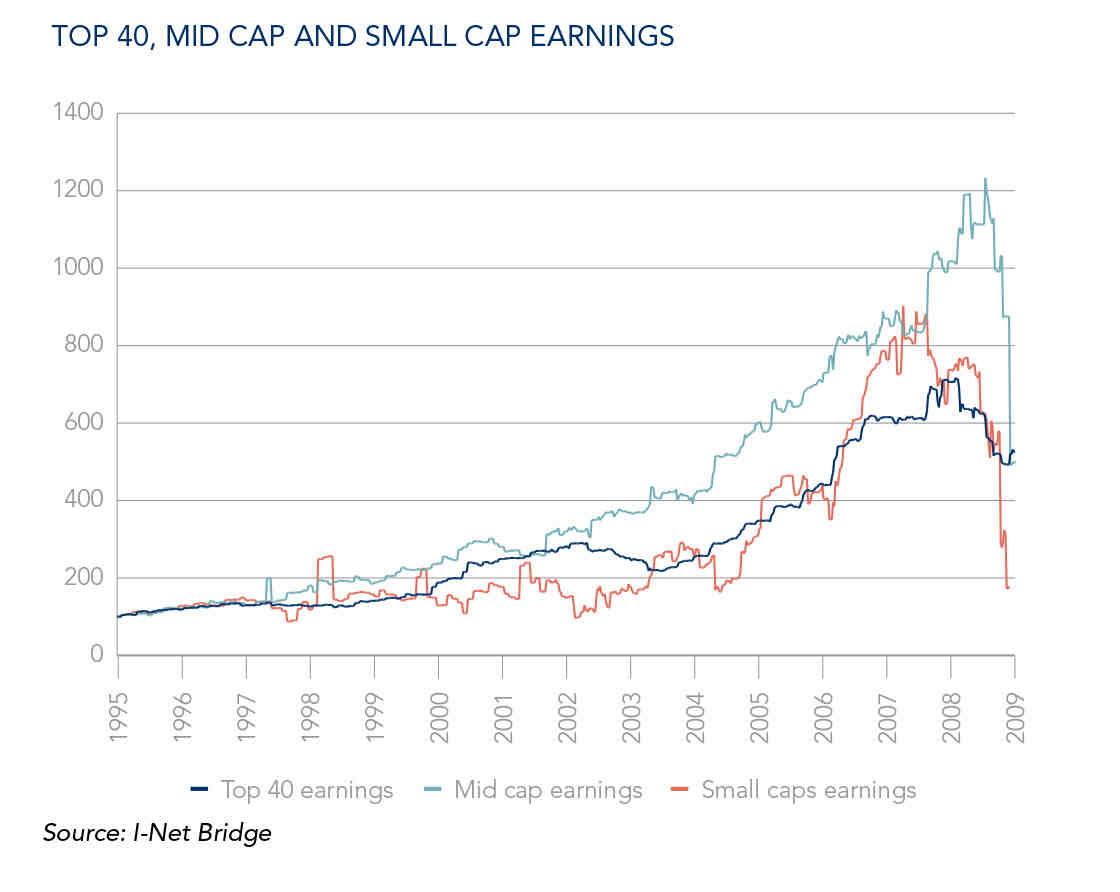 As is clear from the chart above, small cap earnings have been decimated by the current harsh economic climate, and are down a massive 77% since March 2009. Mid caps and the top 40 shares have managed to stem their earnings drop to between 22% and 26%. Why the big difference?

The quality of the average small cap share is not the same as the quality of the average top 40 or mid cap share. These larger indices are typically populated by companies who dominate their market space (the big banks, global brewers, dominant cell phone operators, large food and clothing retailers). The business models of these companies are robust and have seen through many recessions in the past. They are typically managed by experienced executives and generally have balance sheets strong enough to cope with a protracted downturn. Many small cap shares on the other hand do not dominate the industry in which they operate. Often, their business models flourish in the good times, but come under pressure when the economy tightens up. They also tend to have less experienced managers who may not have seen hard times before and who are more prone to over-gearing the balance sheet in the good times; placing financial strain on the company when business conditions deteriorate. The number of rights issues that have been announced in the past six months is evidence of where the strain has been felt. Not one Top 40 company has embarked on a rights issue while the following smaller companies have. 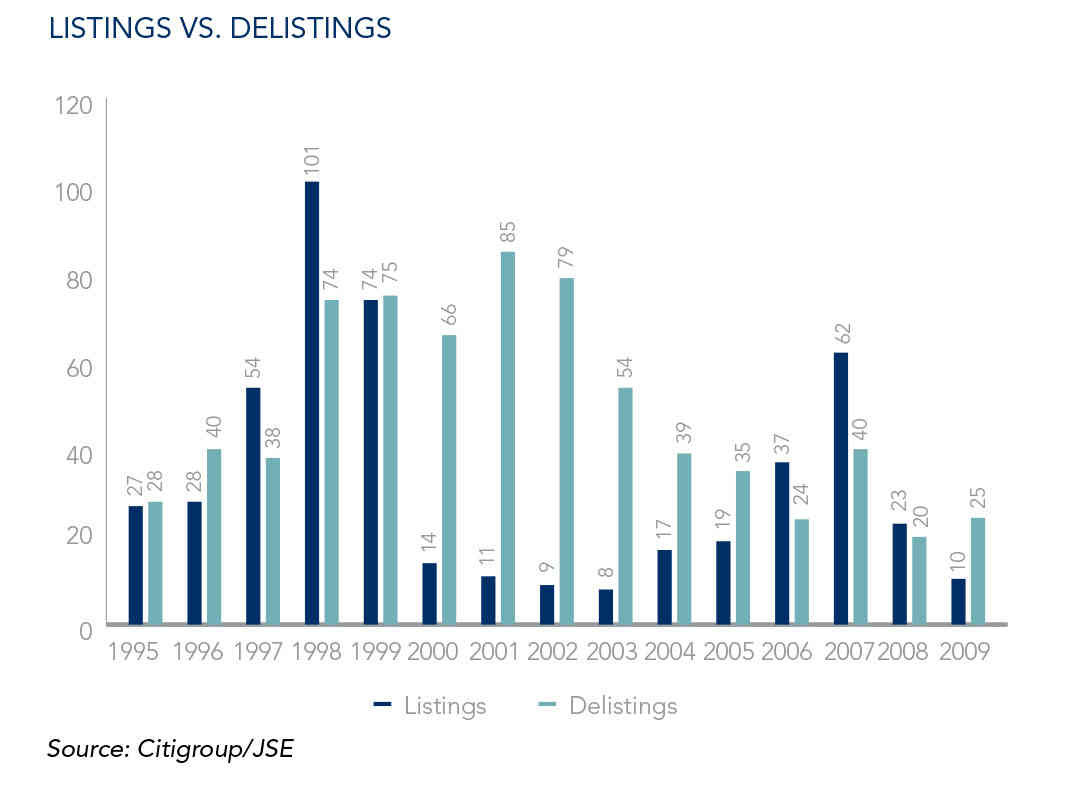 The small cap listing boom of the late 90s, and the subsequent crash, certainly shaped many investor perceptions (mostly negative) of small cap shares. A total of•175 new listings occurred in 1998 and 1999, about the same amount of new listings that happened in the ensuing eight years, which includes the listing boom year of 2007. Many of these companies only remained listed for five years (often less), which explains the large number of delistings in the years 2000 to 2002.

Many small cap unit trusts were launched around this time, (fuelling the demand for the new listings), some of which attracted up to R1 billion in inflows in less than six months. Below are some examples of companies that listed at this time.

This listing boom was the primary driver of the massive five month spurt from small caps for the period January to May 1998, as shown in the chart below. 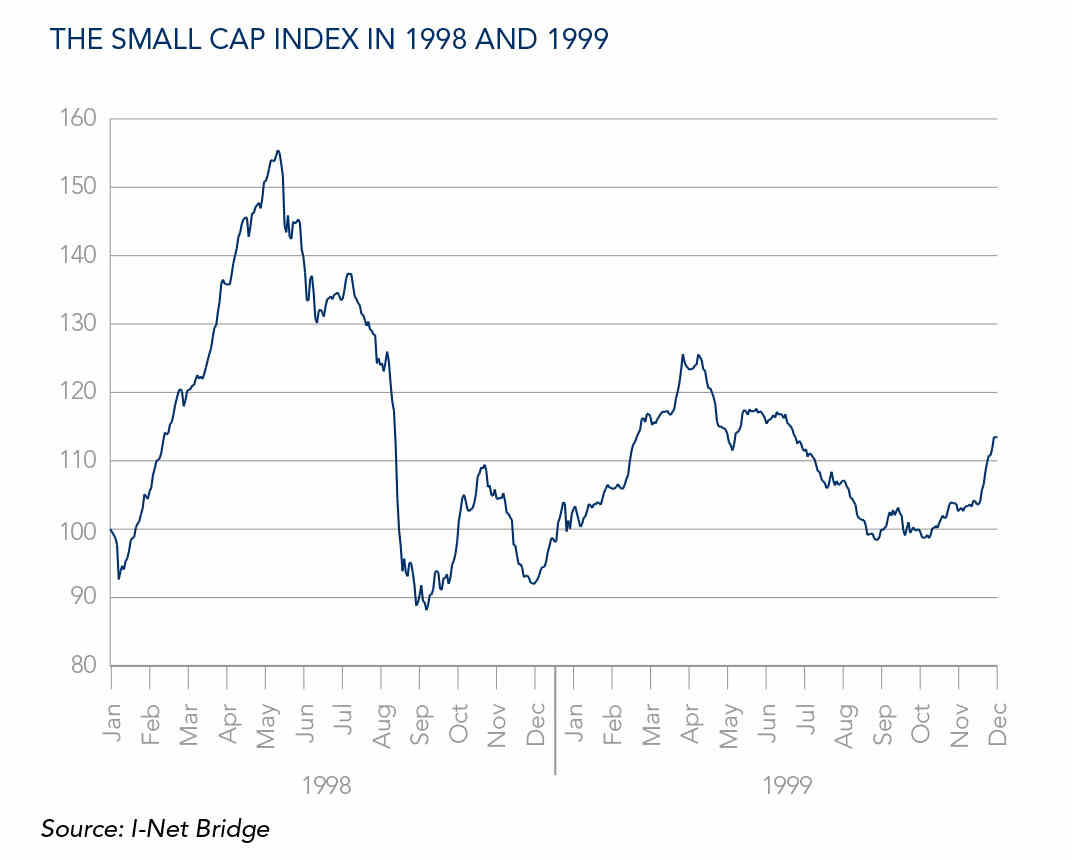 Nearly 10 years later, another listing boom delivered spectacular returns initially, only to unravel in equally spectacular fashion; leaving bewildered investors wondering why they had not learnt their lessons 10 years ago. This was the AltX listings boom of 2007. While the 1998/1999 boom was all about IT and small cap financials, this was predominantly a construction story. And once again, in retrospect, these listings signalled the top of the cycle. From its debut in February 2006 to its peak in November 2007, the AltX gained a massive 153%, only to lose it all (and more) over the ensuing two years, down 78% from the peak to today.

Small caps, because of the volatility of their earnings, are more risky than mid and large caps. Therefore when investors have appetite for risk, small caps flourish and vice versa. The chart below indicates how well small caps performed in the boom years of 2003 to 2007. However, when the market peaked in late 2007 and with the arrival of the global credit crisis, risk appetite waned, and small caps have since underperformed. 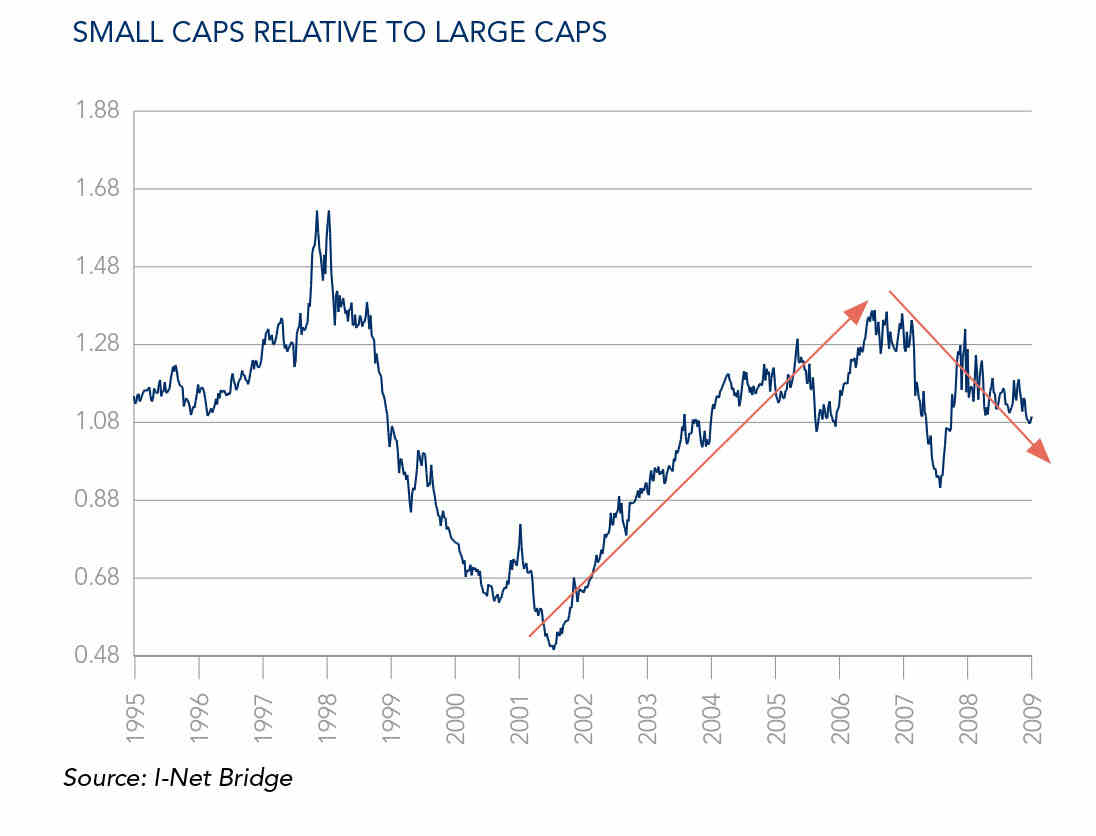 Where in the cycle are we now?

Despite the 77% drop in small cap earnings since mid-2008, the index is up 33% from its March 2009 low. One must also bear in mind that the index is still up nearly five fold from May 2003, the start of the massive five year recovery in small caps. The exact point in the cycle is therefore not that easy to determine, but we would make the following points.

In the past six to nine months, Coronation has bought into many small cap shares, such as Distribution and Warehouse Network, Kelly Group, Omnia, York Timber and Advtech, to name a few. It is not always easy investing in companies where earnings are under pressure and newsflow is poor, but these moments so often prove to be the most rewarding times to invest.


We don’t think it will be different this time.