Anglo American - 94 years in the making

‘Of all those expensive and uncertain projects, however, which bring bankruptcy upon the greater part of the people who engage in them, there is none perhaps so perfectly ruinous than the search after new… mines. It is, perhaps, the most disadvantageous lottery in the world, or the one in which the gain of those who draw the prizes bears the least proportion to the loss of those who draw the blanks; for though the prizes are few, and the blanks many, the common price of a ticket is the whole fortune of a very rich man. Projects of mining, instead of replacing the capital employed in them… commonly absorb both capital and profit.’

Adam Smith, An Inquiry into the Nature and Causes of the Wealth of Nations

‘When your efforts run in the face of conventional wisdom and accepted mastery, persistence can look like madness. If you succeed in the end, this extreme originality reformulates into a new level of mastery, sometimes even genius; if you fail in the end, you remain a madman in the eyes of others, and maybe even yourself. When you are in the midst of the journey… there’s really no way of knowing which one you are.’

In his book Outliers, Malcolm Gladwell challenges our conventional ideas around the origins of success. He sets out to prove, rather eloquently, that success is not borne out of innate genius but can in a large part be attributed to when and where you were born, the opportunities you are presented with, and the amount of practice you are willing to put in.

What then determines the success of a company in an industry where most fail? Mining is a risky business. Adam Smith understood this when he wrote The Wealth of Nations in 1776, and history has not proved him wrong. In the ‘disadvantageous lottery’ of mining, there have been many abject failures and few successes.

The most crucial factor determining success of a mining operation is the quality and location of its assets. The assets that a company own are dependent on its history and the opportunities afforded to build or acquire great mines. Like humans then, one of the key ingredients to a company’s success is the time and location of its birth.

Anglo American was formed in 1917, by German-born Sir Ernest Oppenheimer. South Africa is a country blessed with natural resources, but back in the early 1900s it was still in the early stages of developing into the mining powerhouse we know today.

It was a fortuitous time to be a mining entrepreneur in South Africa. Diamonds were discovered in Kimberley in 1869 (the reason for Oppenheimer coming to South Africa in the first place), gold was discovered in the Wits basin in 1886 and in 1924 a geologist named Hans Merensky discovered platinum in the Bushveld.

In the early years Anglo American invested in gold, diamonds, platinum, copper and coal. It became the major shareholder in De Beers in 1927. Cash flows from mainly gold and diamonds were used to expand the company aggressively and consolidate its position. In 1951 Time magazine named Sir Ernest ‘The world’s king of diamonds and prime minister of gold!’

From its base in mining, Anglo American acquired other interests and became a major force in the South African economy. In 1987 it controlled about 60% of the total market capitalisation of the JSE through 80 different listed companies.

A period of unbundling and simplification culminated in 1999 with a London listing, combining its South African and offshore operations previously held by Minorco. At listing the market capitalisation of Anglo American was $21 billion.

Over the last decade, China’s rapid industrialisation led to a surge in demand for most commodities. Commodity prices increased at a rapid rate as mining companies battled to keep up with the demand. The result was the creation of one of the greatest booms in mining that we have ever seen, and ultimately the spectacular crash of mid-2008.

Anglo American was the darling of the market in the runup to 2008. Its share price reached an all-time high of $70, and at the peak it boasted a market capitalisation of almost $90 billion.

Regrettably, like other mining companies, management and the board were imbued with false optimism from the record high commodity prices and, at the top of the market, went on an acquisition spree. The worst example of this was undoubtedly the acquisition of Minas Rio from MMX for a total consideration of $6 billion. While this made the sellers very rich, it was a poor deal for shareholders, and placed the balance sheet under immense pressure just as commodity prices started to unwind.

From the darling of the market in 2007, Anglo American quickly became an easy share to dislike as commodity prices faltered. The company suffered under high debt levels due to recent acquisitions. Cash flows from their major divisions disappointed. Anglo American Platinum (Amplats) was exposed as a high cost producer and De Beers needed to be recapitalised. Anglo American had to cut their dividend and narrowly avoided a rights issue in the aftermath of the crisis. The share price bottomed at $13 in March 2009.

Despite the strategic errors, Anglo American’s rich history lays the foundations for its future success. The current suite of assets has gone through many siftings, with the best being kept and developed further, and the worst sold. As one of the foremost mining companies for a great number of years, it also benefited from the many opportunities to acquire large, quality assets that were out of reach for most.

Both platinum and diamonds are unique assets which were acquired by Sir Ernest Oppenheimer in the very early part of the company’s lifecycle. The last gold assets were sold in 2009, but the substantial historic cash flows from gold (yes, there was a time when gold mines generated cash!) was used to expand the group.

Some of the ‘newer’ acquired assets are also of very high quality. Anglo American bought Disputada, a Chilean copper producer, in 2002 for $1.3 billion. In 2006, the same mines generated an operating profit of $1.5 billion. In 2003, 65% of Kumba was acquired for R40 a share before the split between Kumba Iron Ore and Exxaro. Kumba Iron Ore is still one of the best long-life, low-cost iron ore assets in the world.

We do not subscribe to the view that reserves of any commodity will run out soon. However, in most cases the easiest and most accessible reserves were extracted first and what is left is more difficult and expensive to mine. Therefore, high-quality, low-cost mining assets with significant remaining lives are becoming more scarce and valuable. These types of assets are in general concentrated in the hands of the largest diversified mining companies, including Anglo American.

Today, BHP Billiton is the largest and generally accepted as the best mining company in the world. They also have a long and proud South African history which contributed to their  success. As illustrated in chart 1, Anglo American’s assets are in most cases comparable in quality to that of BHP, the 10th largest global company. 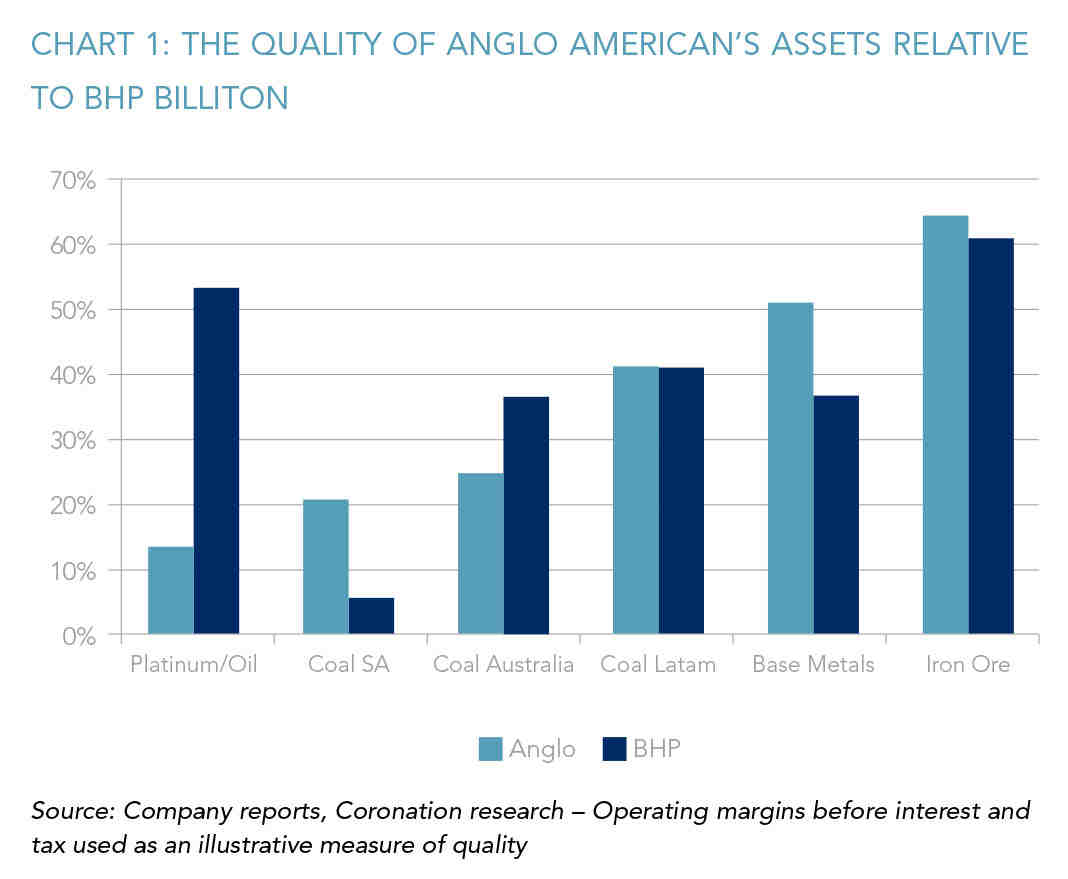 In valuing a company we focus on the fundamentals of the business, realising that its value is not always accurately reflected in the share price. To determine the value of a business we try to ignore the short-term noise and focus on long-term, through the cycle earnings. While this is hard even for relatively predictable companies, it is even more difficult for cyclical companies where we constantly have to fight to not be overly influenced by recent history. While never a precise estimate, our assessment of value is backed up by extensive research and scenario analyses.

We recognise the fact that commodity prices are high, and Anglo American’s short-term performance will be determined by short-term commodity price gyrations. The long-term  performance of an investment in Anglo American will be determined by the difference between what is implied by the current share price and the actual outcomes.

At the peak in 2008, Anglo American traded at $70 per share. Today you can buy the same company for almost half that amount. At current prices, it trades at below 10 times our assessment of long-term earnings, and only 1.1 times net asset value. The market thus assumes that Anglo American will not deliver returns much in excess of their cost of capital. Chart 2 shows the company’s price to net asset value over time.

The current share price implies a long-term return of below 10%. This compares to an average return on equity over the last 94 years of 15.6%, and 18% over the last 45 years. We believe it is improbable that Anglo American’s return will be below what the market is pricing in and that there is a high likelihood of returns materially above this. 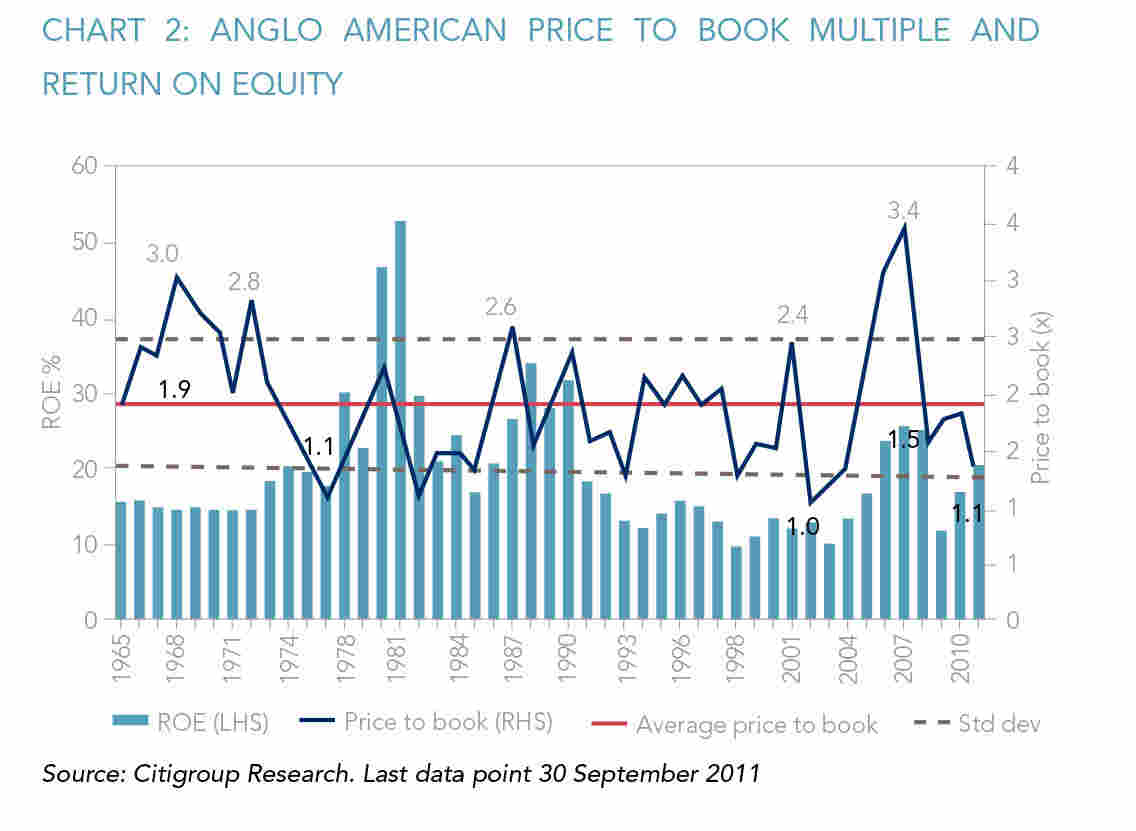 Given the current weak global outlook, conventional wisdom would indicate that investors steer clear of the more cyclical sectors of the market. While weak economic conditions are clearly negative for commodity prices and thus short-term cash flows of our resource companies, we see some value in the sector and especially in Anglo American.

We try to ignore conventional wisdom as it is rarely synonymous with intelligent investing. Anglo American has been built up over 94 years with genius and sometimes a touch of madness. The result is a portfolio of quality assets that hold the key to future success as it has in the past. This is being offered to investors at a discount. Anglo American is a top 10 holding across our portfolios.