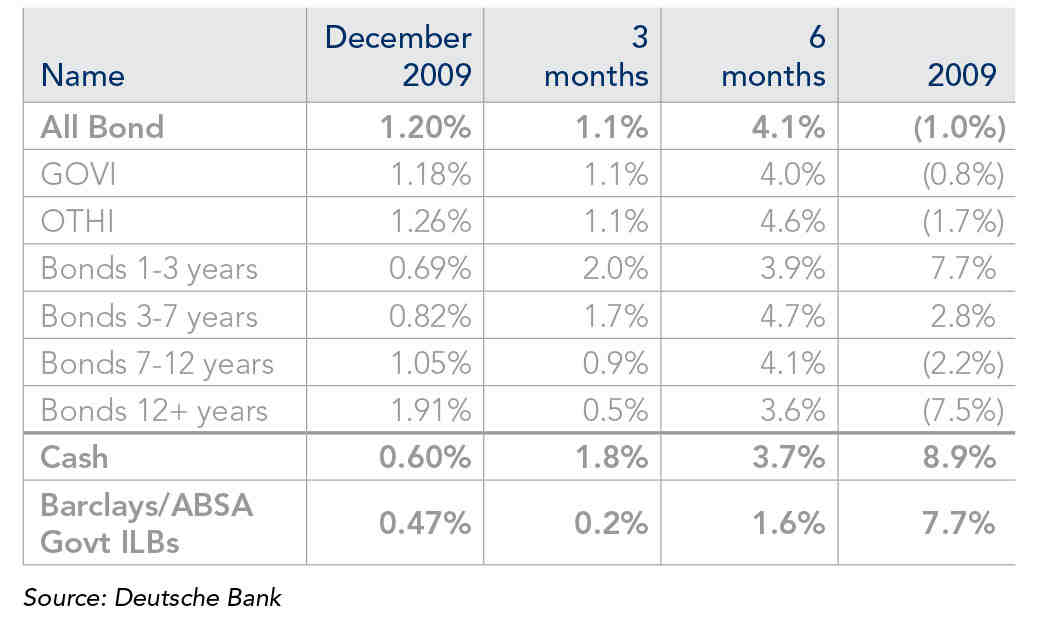 Bonds returned a very poor -1% for the 2009 calendar year; underperforming cash by close to 10%. The outlook for the year ahead, however, looks decidedly more positive, with current
yields close to 9.5% compared with their 2009 starting point of around 7%.

The key driver for this improved outlook is the expectation that the improving trend in inflation will continue in 2010. CPI ended 2009 with a November release of 5.8% – the second month in which it fell within the 3% – 6% target range. The continued rand strength coupled with weak money supply and negative private sector credit extension bodes well for inflation in 2010.

However!... a sell-off in the rand could derail this

The risks to our relatively benign inflation outlook in 2010 stem from a potential unwinding of the base effects of the lower food and fuel prices experienced in 2009, uncertainty over electricity price increases and the chance of a severe bout of global risk aversion which could trigger a sharp retracement in the rand.

But… beware the ‘elephant in the room’

The proverbial ‘elephant in the room’, putting pressure on the bond market and not allowing any compression in yields, remains the weekly supply of new government debt. By November 2009, National Treasury had stepped up its nominal bond funding requirement to R2.1 billion a week and issued R600 million face value of inflation linkers (about double this figure in actual cash outlays required). Added to this is the continued state-owned enterprises’ (i.e. Eskom, Transnet, etc) issuance.

Only once there is a let up in the issuance programme (improving tax revenue/growth) or new buyers of bonds (foreigners or banks as they start extending credit again) can one expect a
decent rerating of bond yields to occur. For now we need to be satisfied with just the yield portion of the return, which at 9.5% is not an insignificant buffer versus cash at around 7%.