Bonds continued to sell off during June, resulting in negative returns both for the month and for the quarter as a whole. The All Bond Index (ALBI) lost 1.5% in June and 2.3% over the quarter, while inflation-linked bonds (ILBs) were more negatively affected because of their high duration and lost 5.5% in June and 4.9% for the second quarter of 2013.

The further sell-off in bonds in June took place despite some stabilisation in the rand over the month (around the R/$ 10 level). The weakness came against the background of a rise in global bond yields. US 10-year treasury yields rose sharply from 2.17% to 2.49% over the month as the new buzzword used by the US Federal Reserve Bank (Fed) became ‘tapering’ – with the market’s nervousness over the potential withdrawal of Fed support becoming clear. The anxiety extended into emerging markets, which saw some significant redemptions by foreigners. This was the case in South Africa as well, with R10.6 billion in net foreign sales being recorded in the month of June (following a R3.7 billion net outflow in May). This resulted in the first quarterly net outflow being recorded since the first quarter of 2011 (see chart below). 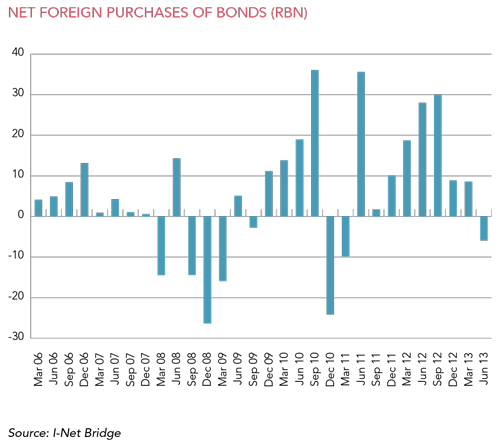 ILBs were particularly hard hit during June, with the rand remaining weak (albeit stabilising) and the South African Reserve Bank (SARB) coming out late in the month expressly saying it would not act pre-emptively against inflation. It is hard to fathom that complacency about South Africa’s inflation was the primary reason behind the poor performance in local ILBs.  Rather, we think a significant part of the move was due to the global back-up in real yields, and the following chart illustrates how South Africa’s real yields have moved in tandem with US ones recently. With breakeven inflation below 6% in the belly of the curve, implying that the market is too optimistic on inflation versus our expectations, we think that ILBs continue to offer value and thus would not be sellers at current levels. We would note that, despite the sharp fall in June leading to ILBs underperforming year to date (as per the table on page 14), on a 12-month basis they still show significant outperformance versus both nominal bonds and cash. 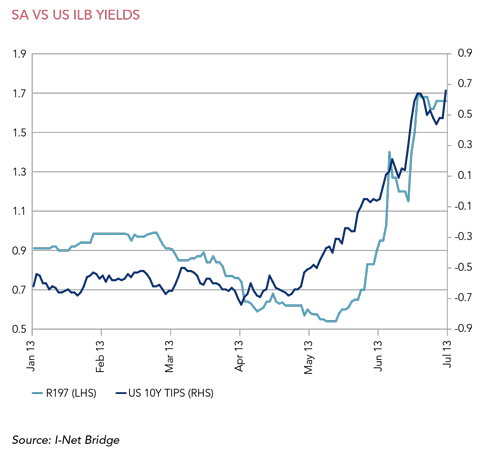 It’s worth delving a bit further into the speech given by SARB governor Gill Marcus on 26 June 2013. Specifically, we note the comments that point out the SARB is already more tolerant of inflation at the upper end of the target range because of the growth background; and that there are increasingly strong upside risks to the inflation outlook (because of the rand). But, more importantly, we would highlight the comments that current inflation (and the SARB’s forecast) constrains accommodation but does not ‘automatically’ imply a tightening of the monetary stance, and that the SARB will not be ‘unnecessarily pre-emptive’ – the latter comment coming after the speech notes ‘there is of course always the danger that we are behind the curve’.

While we can sympathise with the SARB’s unwillingness to tighten policy against the growth background, we think there are a few points that need to be made. The first is that as inflation rises, policy is already becoming more accommodative as real interest rates fall. In other words, if the SARB leaves the policy rate unchanged against rising inflation, it is in fact easing (not maintaining) policy. Secondly, inflation expectations (as per the Bureau for Economic Research survey) are nudging up, now between 6% and 6.1% for the next few years. If history is anything to go by, these will rise as inflation itself does. Thirdly and possibly most importantly, is the clear implication that the SARB is more willing to make a ‘policy error’ that results in higher inflation than one that results in lower growth (even though interest rates are not the factor inhibiting growth at present).

Needless to say, the fall in the rand has underscored our expectation that inflation will breach target this year, and the risks remain clearly skewed to the upside – how much will depend on where the rand settles of course, but the inflation picture remains murky, with a weaker rand and pressure on wages the main concerns. We do not see inflation falling comfortably within the target before the fourth quarter of 2014 at the earliest.

We have been cautioning for some time that global bond markets were overvalued and that the rand was vulnerable, being buoyed by liquidity-related flows in the face of weak domestic fundamentals (including the twin deficits and the sociopolitical situation). Under the combination of current domestic and global factors, we expect the rand to remain relatively volatile. We remain defensively positioned with respect to nominal bonds and overweight ILBs in the fixed income funds we manage.

Mark le Roux is responsible for the fixed interest investment process and portfolio management functions for both institutional and retail portfolios. Mark has more than 20 years’ experience in managing both traditional and alternative portfolios.