‘All that glitters is not gold. Often have you heard that told.’– William Shakespeare, The Merchant of Venice

The case for strong growth in domestic consumption in China is well known. Consequently, most companies that stand to benefit from this predicted swell in consumption are priced for very strong growth (the Chinese supermarket retailers, selected clothing retailers, branded food companies and beer companies typically trade on 25 – 30 times earnings). Chinese car companies that are priced very reasonably at low double-digit multiples stand out as glaring exceptions to us, and we believe the right companies offer attractive returns at current prices.

The prospects for car sales in China are indeed very eye-catching. Even though China has overtaken the US as the country with the largest number of car sales in the world (a title that the US held for 100 years), there is still plenty of growth that lies ahead due to low per capita vehicle penetration and rising disposable income. Up to now, Tier 1 cities like Beijing and Shanghai (which in turn are still low compared to other countries) have been responsible for most of the increase in vehicle usage and – especially with the Chinese state’s desire to encourage domestic consumption – it can reasonably be expected that vehicle usage in Tier 2 and 3 cities will grow strongly in the years ahead. An additional factor that will stimulate demand is the construction of a huge road network in China. If the economy started to falter, the country would most likely respond by accelerating infrastructure spending and car subsidies rather than cut spending in these areas – much in the same way that the US did with Roosevelt’s New Deal during the Great Depression, which led to a massive demand for cars. As the world slid into recession in 2008, this
was exactly how the Chinese government reacted. As both the vehicle and road infrastructure industries are large employers it was important for China to support and stimulate employment.

The first graph below shows vehicle penetration in a range of countries, while the second graph shows the historical growth rate of vehicle sales in China, which has been well north of 20% per annum over the past several years. 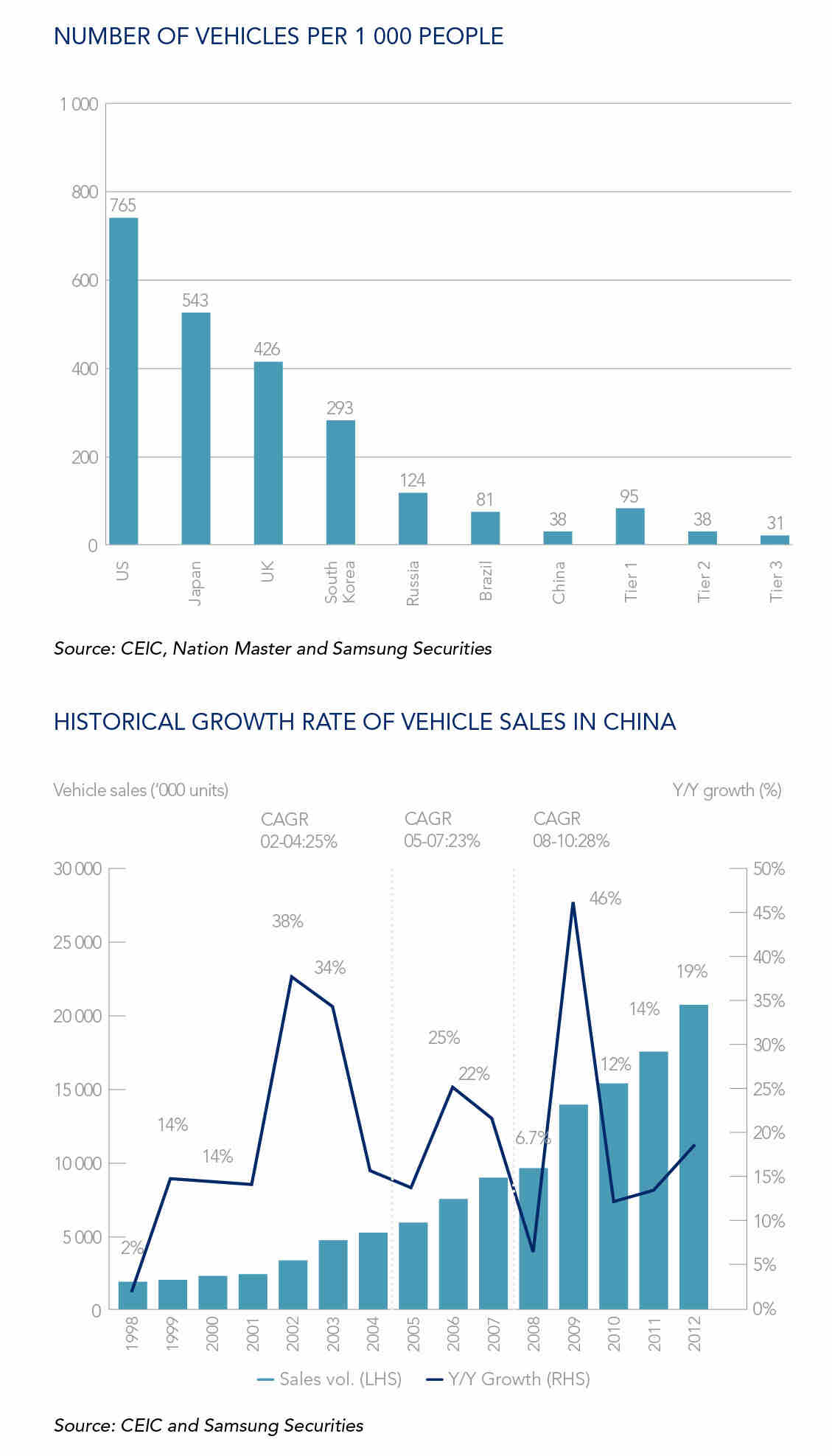 The history of investment returns in car companies is littered with numerous successes and even more failures. The key reasons for failure seem to be companies that are insufficiently capitalised to withstand a recession (the industry is very cyclical), an uncompetitive cost structure (most US and European car companies) and/or an inferior design, technology, quality and value proposition. The success stories are characterised by strong balance sheets, cost leadership and perhaps more importantly delivering a consistent quality product that is sufficiently desirable and is priced such that the consumer gets value for money and the company still makes a sufficient profit margin.

With the above in mind, we have identified Great Wall Motor (Great Wall) and Guangzhou Automobile Group (GAC) as two leading domestic companies that we believe have a very high probability of being long-term winners in the Chinese motor vehicle industry. Our Coronation Global Emerging Markets Funds (rand and dollar) currently have some 6% invested in these two Chinese car companies.

Great Wall Motors – the little company that can

Great Wall was started by current CEO Wei Jian Jun (who owns 38% of the company) as a small truck manufacturer in Hebei province in 1994. It has an impressive history and stands out in no small part due to its strong and entrepreneurial management. By 1998, Great Wall had the number one selling pick-up in China, and has dominated the pick-up market for 12 consecutive years since then. The company started manufacturing SUVs (Sports Utility Vehicles, i.e. 4x4s) in 2002 and by 2007 led the SUV market with the number one selling SUV. Great Wall currently has a market share of 27% in the Chinese SUV market, and has further increased their lead from 2007. Recently the company has entered the very competitive sedan
market. Initial reviews and sales of their sedans have been positive, and this coupled with their historical success in pick-ups and SUVs bodes well for their future in this market. Sedan sales only began in earnest in late 2010, and should be a fine boost to earnings and sales as capacity utilisation of the new plants increase.

Great Wall has further differentiated itself from other Chinese car makers in that it is achieving success as an exporter of a domestic Chinese brand with 15% of 2009 sales coming from exports to 70 countries. This is evidence of their superior quality relative to other domestic brands. Great Wall is also the only domestic brand to offer a four-year warranty on their product compared with competitors who offer warranties of three years or less.

The business has a strong balance sheet with approximately 20% of its market capitalisation in net cash (or close equivalents) and should be able to withstand fairly tough economic circumstances. In spite of high growth (and the investment required to facilitate this growth), return on equity over the past seven years (since listing) has averaged an impressive 17%. This indicates that the company did not chase after growth at the expense of shareholder returns. Diluted earnings per share have grown at an impressive compounded rate of 27.8% over the past 10 years and 14.8% over the past five years, lagging sales growth of about 26% CAGR. This is in large part due to the continual investment and time taken to reach capacity in new vehicle lines. We believe the company should be able to maintain sales and earnings growth of more than 18% p.a. for at least the next five years, and on a conservative forecast 2011 P/E
multiple of 10.9 (8.8 excluding cash) and dividend yield of 2.4% we believe the company is attractively valued and offers a very good risk/reward proposition.

GAC differs to Great Wall in many ways, which is part of the reason we have chosen it to complement our Great Wall holding in our portfolios. GAC is a state-controlled (Chinese government) company, and as such lacks some of the entrepreneurial flair that Great Wall has so deftly demonstrated. But what it lacks in incentivised management, it makes up for in brand and technology excellence in having world-class partners in the form of Honda and Toyota. It also has a different sales composition to Great Wall. Whereas Great Wall’s sales are mostly made up of SUVs and pick-ups (and their sedan division will focus on small low-end cars), the majority of GAC’s sales are in the larger mid to high-end segments.

GAC is the sixth-largest auto producer in China. It mainly produces and sells passenger vehicles through its GAC Toyota joint venture (JV) and Guangqi Honda JV. Government regulations restrict foreign automobile companies to a 50% holding in operating subsidiaries. Furthermore, they are only allowed two such JV agreements/partners with the result that the large multinational car companies split their vehicle models between two JV partners. The local JV partner on the other hand can have as many global car company partners as they like, as well as manufacture their own brand/s. GAC for example has a relationship with Toyota and Honda as mentioned above, but also have JV relationships with Fiat, Mitsubishi and Hino as well as their own domestic brands (GAC, Everus and Changfeng). For now more than 60% of their sales are from the Toyota Camry and Highlander as well as the Honda Accord and Odyssey models.

Like Great Wall, GAC has a very strong balance sheet with 25% of its current market capitalisation in net cash and cash equivalents and should be able to weather pretty severe economic circumstances. Sales should also be strong and comfortably above the expected industry growth rate of 16% CAGR over the next five years. We expect profits to slightly lag sales growth over the period due to the expiration of tax breaks and the current high capacity utilisation. On an expected 2011 P/E multiple of 10.5 (7.8 excluding cash) and a dividend yield of about 2.5% we believe this investment offers significant margin of safety and should provide handsome returns.

The recent difficulties experienced by American and European manufacturers (in large part a result of their manufacturing cost disadvantages, but particularly for the American companies also a result of quality and design inferiority) has tarnished the whole industry with poor investment ratings – in many cases poorer than the famously cyclical nature of the industry would imply. It is in circumstances like these that the patient investor can identify value in order to generate gainful long-term returns.

Manufacturers in China have a production cost advantage over their Western counterparts, and as Chinese automobile manufacturers improve their quality and technology they are most likely set to make inroads on the large multinationals in the same way that Japanese and Korean manufacturers did in past decades. In both Great Wall and GAC we believe we have found market-leading companies, operating in a high growth industry, and who have the balance sheet strength to weather and benefit from the cyclical nature of the industry – gold by another name, and importantly, at a price that does not glitter.