There has been some debate about the outlook for global inflation for this year (and the next couple of years). The argument is broadly split into three camps:

Of course, being economists there is always an ‘on the other hand’… in this case, the ‘other hand’ argument is that camp two will dominate for a while and camp one will eventuate. Camp three is probably the least ‘flexible’, as the scenario outlined there would take some years to play out.

Our take on the outcome is largely a mixture of the first and second views. While we agree that governments across the globe will need to rein in the fiscus to get budget deficits and government debt back in line with more prudent levels, we also believe that – in the major economies – the unwind will not happen before governments are satisfied that underlying growth has returned. There are undoubtedly some countries where the pressure on the fiscus is so great that they will be forced to tighten fiscal policy before they would ideally like – Greece springs to mind, and possibly the UK – but we do not see this as an issue for the countries that have a major impact on global growth.

It should also be noted that as growth takes hold, fiscal positions will start improving automatically anyway. Employment lags growth, but as growth and production feed through into employment, both company and individual tax receipts will rise and deficits will start falling. At the same time, some of the emergency spending programmes we have seen, including the bank bailouts, will start easing (some have already started this process). 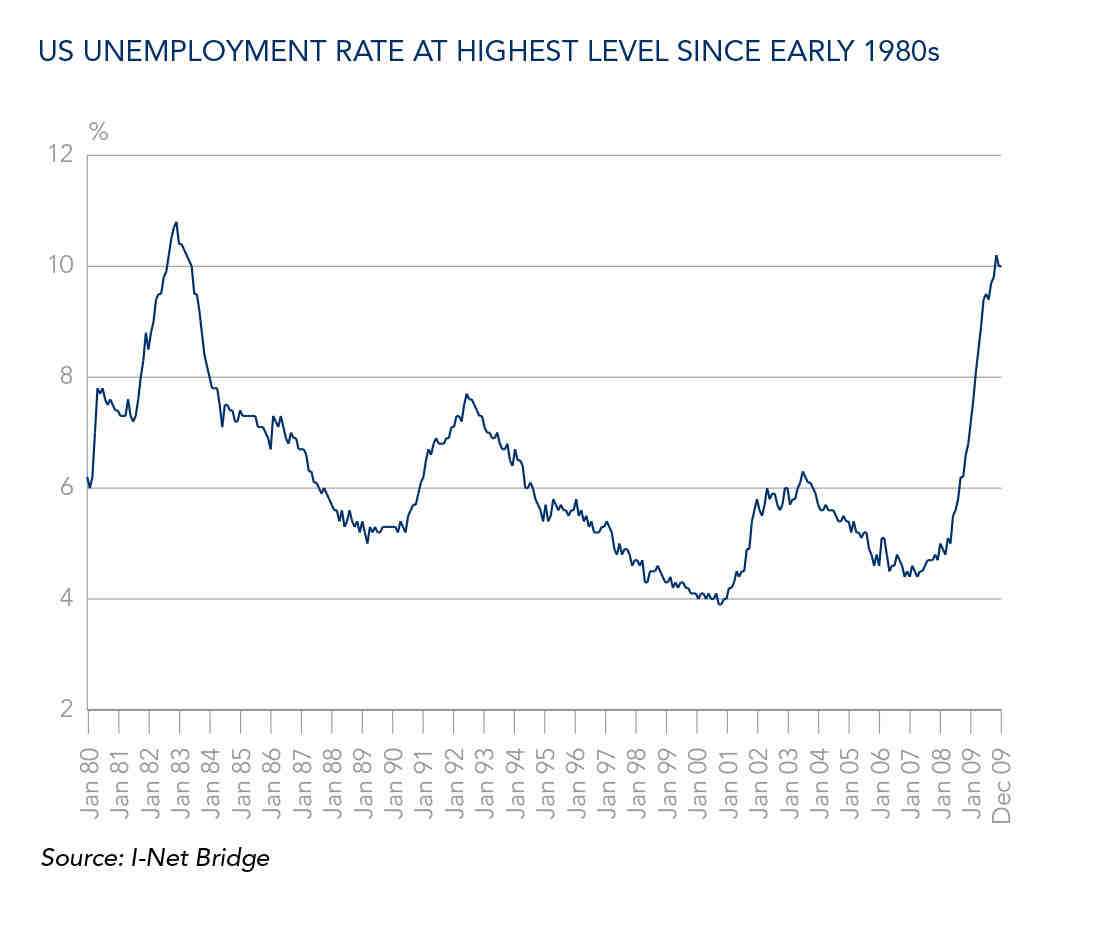 At the earlier stages of recovery, we will see a significant amount of slack in both capacity to produce goods and in labour markets – where many countries still have unemployment rates at around the highest for at least a decade and, in some instances, at the highest rates since the early 1980s. While this slack remains, there is unlikely to be much pressure on prices or wage rates. Gradually, as excess capacity is absorbed, however, then we do believe that inflationary pressures will start to re-emerge.

Another factor raising concerns about inflation down the line is the fact that a number of governments have ‘monetised’ their deficits – where terms like ‘quantitative easing’ basically mean ‘printing money’. As Nobel Prize-winning economist Milton Friedman said, ‘inflation is always and everywhere a monetary phenomenon’. Friedman has been proved right over the years, and we see no reason he would be wrong this time.

Central banks remain committed in their fight against inflation, and when signs of inflation emerge we do expect to see central banks start tightening policy. Indeed, some developed country central banks, like Australia and Norway, have already started raising rates. In these two countries as almost everywhere, the rise in rates is coming off extremely low levels and it will take a long time before interest rates might be regarded as ‘normal’, much less actually restrictive. The same will be true for the US, where the markets are currently factoring in increases in the Fed funds rate beginning later this year. 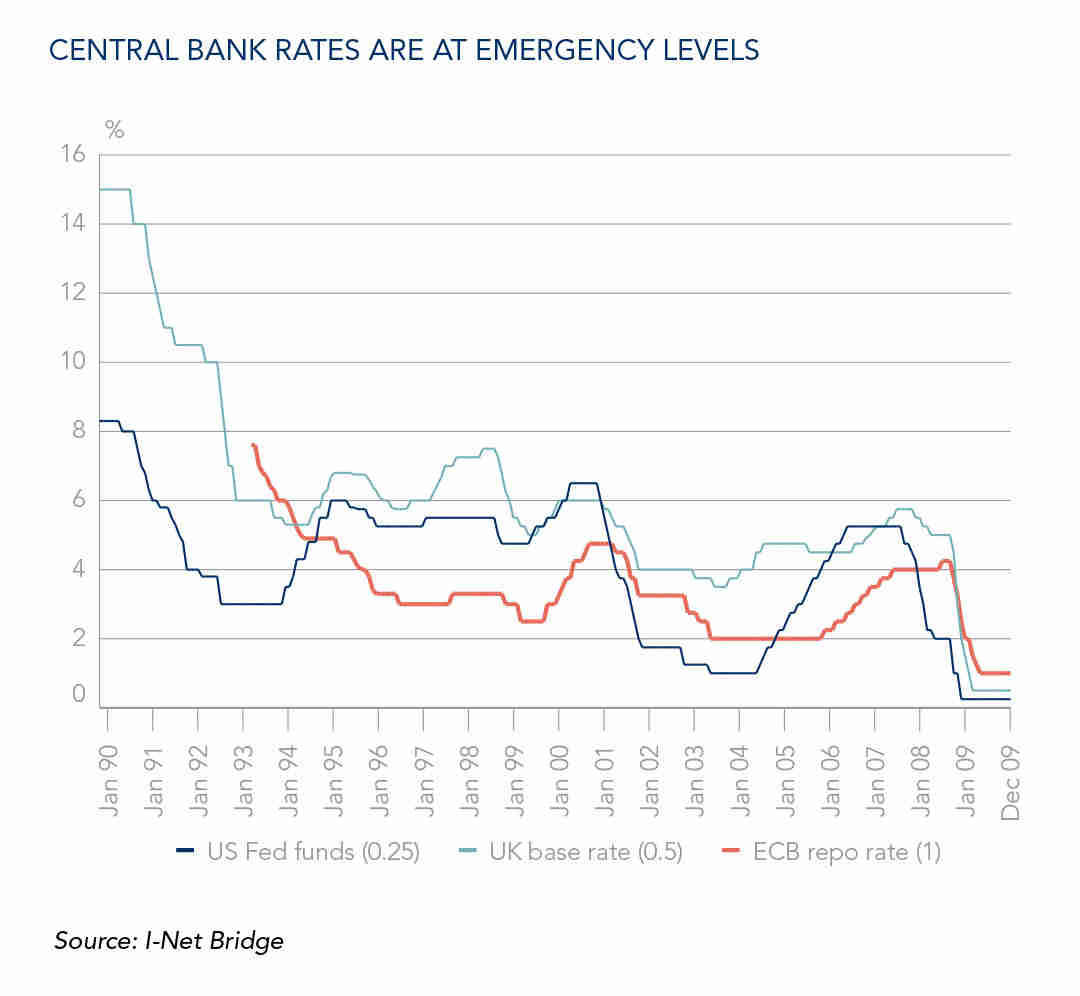 Again, however, it should be emphasised that central banks are not at all keen on choking off recovery and interest rate hikes will remain cautious. Central banks are essentially walking a tightrope, where they are betting they will be able to start raising rates in time to prevent inflation reaching uncomfortable levels. But as they try to maintain the balance between nurturing growth and preventing inflation, we believe that they will err on the side of promoting growth. The likely outcome is that inflation will be higher than desired, at least for a while.

Central banks will not stand idly by while inflation gets out of control, however. The likely occurrence at some future stage of a combination of monetary and fiscal tightening will certainly have a dampening effect on growth, but we do not expect it to be so bad that we end up going back into recession. Partly this is because we expect policy to remain as supportive of growth as it can, but it is also partly due to the expectation that growth in emerging markets – and especially, yes, China – will remain fairly robust. (Indeed, the potential problem we foresee for China is not that growth falters, but that it overheats.)

The overall picture we see for the world economy is thus one of a return to growth, but due to the need for a rebalancing of monetary and fiscal policy we do not see a return to the global growth rates of around 5% that characterised the 2004-2007 period.

What does all this mean for South Africa? South Africa’s growth cycle has followed the global growth cycle, with a lag – as makes perfect sense for an economy that is very exposed to the export sector. While South Africa has gone through a recession in 2009, we see fairly robust growth returning in 2010 and 2011 – not the same kind of growth rates as seen in the boom years, but certainly respectable growth of around 3%. In fact, we see almost a mini-Goldilocks scenario, as at least for most of 2010 we expect inflation to remain fairly tame. This is partly because of a similar global picture, but importantly is also due to the fact that the rand has been strong for a fair while now and the usual lags between the currency and inflation imply a positive outcome for inflation for this year. The picture changes somewhat next year, when the combination of a stronger dollar/weaker rand (likely from later this year) and rising global inflation may see our inflation rate rise somewhat. But the overall theme is similar to what we see globally, in that things will not be as good as they were in the boom years – but we do not expect a slip back to the worrisome combination of low/negative growth and (in South Africa’s case) the high inflation that characterised 2009.