The year 2003 was significant in the life of Cape-based investment holding company, Hosken Consolidated Investments (‘HCI’). Its major asset, a 5% stake in the unlisted Vodacom group, was sold for R1.5 billion (having been valued at R90 million at the time of acquisition). Interest in the company waned following this, as many shareholders held HCI shares to gain exposure to Vodacom. HCI used the proceeds of the Vodacom sale to pay off debt and effect a buyback of some 71% of the company’s shares, in the belief that the value at which HCI was trading was significantly below what it was worth. At that point, their primary asset was e.tv, the free-to-air television station. Shareholders were not particularly positive on the prospects for this business, which reported net losses of R91 million that year. However, HCI believed otherwise and invested a further R100 million in the company. After the voluntary buyback and the perceived lack of interest in the company, HCI management decided to take the company private. An offer was made to minority shareholders by a management-led consortium at a 47% premium to the price at which the voluntary buyback took place. But the single remaining institutional shareholder, London-based Marathon Asset Management, rejected the offer. The dispute and resultant litigation forced the JSE to suspend trade in HCI due to the uncertainty around the delisting. HCI eventually backed down and withdrew the buyout offer, agreeing to keep HCI listed.

At the time, company management were heavily criticised for trying to effect the buyout at a level well below a ‘fair’ value for the company – a fair value that was difficult to assess as it was based largely on the fortunes of (a then loss-making) e.tv. Management’s rebuttal was that the offer was well above the level accepted by shareholders at the time of the buyback of more than 70% of the shares in issue.

Today’s shareholders in HCI should be very happy that the delisting of the group was blocked. Since then, the company has grown from a market capitalisation of R380 million in 2003 to R15.5 billion; a remarkable growth rate of 48% per annum for 10 years. Yes, the 2003 base was low due to the incorrect (in hindsight) valuation placed on the company by the market, but the fact remains that this has been a phenomenally successful investment business.

This success is largely due to the two individuals at the helm of HCI (they were back in 2003, and still are today) – John Copelyn and Marcel Golding. They operate from small, understated premises in Kloof Street, alongside e.tv’s Longkloof studios, and go about their business with a steely determination but no fanfare. Copelyn joined HCI as CEO in 1997 – a position he holds today. Before HCI, he was the general secretary of the Southern African Clothing and Textile Workers Union (‘SACTWU’). SACTWU is the largest shareholder in HCI today, owning some 38% of the company. Golding also joined HCI in 1997 as chairman, a position he still holds. Their investment track record, as evidenced by the success of HCI, places them amongst the most successful investors in South Africa for the past one and a half decades. Yes, there have been a few poor investments, but their huge successes have far outweighed all of these. A great deal of their investments have been in entities that have required a massive amount of work (Seardel, Golden Arrow Bus, KWV), or in industries where regulatory/political issues would frighten most other investors (gaming/public transport/television broadcasting). Nobody can accuse HCI management of not being willing to get their hands dirty. Their style is viewed as confrontational by some, but on the whole it is a role forced upon them when fighting for the rights of HCI or its underlying investments. A good example of this would be the litigation against the former directors of Seardel in 2012 (HCI had bought the company the prior year) that resulted in the recovery of some R250 million of assets.

In 2013, HCI is dominated by two assets, the JSE-listed gaming and hotels business, Tsogo Sun Holdings (‘Tsogo’), and e.tv. Together, these assets comprise some 83% of the value of HCI. 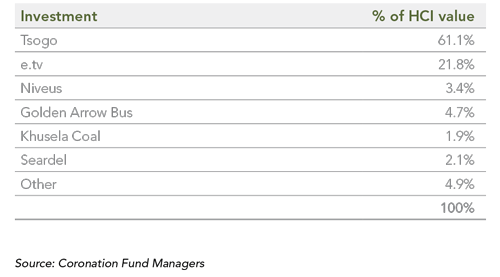 e.tv, the first privately owned free-to-air television station in South Africa, was first granted a broadcasting licence in 1998. It is not a television station that I (nor most of my colleagues) ever watch, but it has grown its audience base to such a level that it now commands approximately 21% of all television advertising spend in South Africa. From a loss of R91 million in 2003, e.tv reported an attributable profit of over R400 million for the period ended March 2012.

e.tv, like other broadcasters in South Africa, is gearing up for the move from analogue to digital broadcasting. The switchover is scheduled to take place in the next few years, following a period of ‘dual illumination’, i.e. when both signals will be available.

Digital terrestrial television (DTT) refers to the broadcasting of terrestrial television (using earthbound cables rather than satellite) in digital format. In analogue, one channel (e.g. SABC1) uses a dedicated frequency to broadcast due to the large amount of bandwidth required by the analogue signal. In digital, the signal is compressed. This allows for more channels to be broadcast using the same bandwidth as one current analogue channel. As a result, each broadcaster will be able to screen many more channels under DTT than under analogue. For example, e.tv is likely to have four channels, as opposed to their current single channel (excluding the 24-hour e.tv news channel). Consequently, e.tv will need significantly more television content to cover the additional channels. In preparation for the switchover to DTT, which e.tv views as an opportunity to gain advertising market share, the company has spent the past few years building their content library. Certainly, there will be winners and losers in the switchover to DTT, but we would back e.tv to emerge as the winner over the state-owned broadcaster, SABC. Erring on the conservative side, we do not value e.tv based on a rosy DTT outcome, but on current levels of profitability only.

How HCI gained control of Tsogo is a story in itself, but it has undoubtedly been the single most successful investment in the company’s history. Ten years ago Tsogo did not form part of HCI’s portfolio, yet today it makes up 61% of the portfolio and is worth more than R11 billion. HCI bought its first stake in Tsogo back in 2004, acquiring a 32% holding in its controlling shareholder, an effective 15.6% in Tsogo. Over the years, it increased this stake in Tsogo’s controlling shareholder to over 99% in a series of transactions to gain effective control of Tsogo with a 51% stake. In early 2011, Tsogo embarked on a reverse takeover of the listed Gold Reef Resorts which resulted in HCI owning 41% of the enlarged Tsogo Group. Not only has Tsogo proved to be a hugely successful investment for HCI, but the business has generated significant cash flows, allowing HCI to repay the bulk of its debt and make new investments.

It’s interesting to speculate on what HCI will look like in five years time. Copelyn is now in his early 60s, Golding in his early 50s. Together, they own 11% of HCI. Will they hand over the reins to a younger generation of managers? Or will they attempt to unlock the value that is trapped in the current structure? HCI is not a difficult company to value. Its main asset is a listed entity, while financial data is provided on its other investments, which enables investors to value these businesses with a fair degree of confidence. In addition, a corroborating valuation of e.tv can be obtained from Remgro’s annual report,being a minority shareholder in e.tv. Our calculations show that HCI is worth about 24% more than its current share price. Considering the value that HCI has been able to create for shareholders for more than a decade, we do not consider it reasonable for HCI to trade at such a significant discount to its underlying investments – and we would imagine that Copelyn and Golding feel the same way.

A possible hint at the future direction of HCI is given in their latest annual report, in the CEO’s commentary, which reads: ‘The very success of the group in relation to media and casino investments has created a situation where other extremely interesting companies are so hidden in the shade of these successes that they are being grossly undervalued by the market. As a result, we have decided to consider decentralising the company’s operations to some extent. The first consequence of this has been the recent announcement of the splitting off of some 45% of the shares in Niveus Investments Limited.’

What this transaction tells us is that HCI management see the trapped value in the current HCI structure and are willing to unlock it. Our calculations show that the separate listing of certain HCI assets in the Niveus structure, as mentioned above,has added over R500 million of value to HCI shareholders. The logical step down the line is the unbundling of the stake in Tsogo, and a possible unbundling and separate listing of e.tv as part of an enlarged media grouping.

Considering the history of value-enhancing transactions at HCI, we have every confidence that not only will the value of the underlying investments grow over time, but that, in addition, the discount at which HCI trades relative to the value of its investments will disappear.

ALISTAIR LEA is an experienced small caps and financials analyst. He has been responsible for the management of the Coronation Smaller Companies Fund since March 2005.