‘The best-performing stocks are not in industries that are at the cutting edge of the technological revolution, rather they are often in industries that are stagnant or in decline. These firms are headed by managements that find and pursue efficiencies and develop competitive niches that enable them to reach commanding positions no matter what industry they are in. Firms with these characteristics, which are often undervalued by the market, are the ones that investors should want to buy.’ Jeremy Siegel

We have a material position in Mondi across client portfolios and it is one of our highest conviction ideas at present. Mondi is an integrated paper and packaging producer with key operations located in Central Europe, Russia and South Africa. Although the paper and packaging sector is not particularly cutting edge, we believe that Mondi is an asset displaying the characteristics quoted by Jeremy Siegel and presents a great investment opportunity for long-term investors.

The roots of Mondi were first planted in South Africa in 1967 when its former owners, Anglo American, built the Merebank Mill. Following more than two decades of growth and consolidation in South Africa, Mondi entered Europe in the early 1990s to pursue expansion through acquisition. Over a long period of time Mondi acquired businesses in Austria, the UK, France, Russia, Slovakia, Poland, Hungary, Denmark, the Netherlands, Bulgaria and Italy.

It is interesting to note that Tony Trahar, former Group CEO of Anglo American was in fact CEO of Mondi prior to handing over the reins to current Mondi CEO David Hathorn in 2000. In 2002 Mondi was the biggest division within Anglo American based on contribution to headline earnings, and between 2001 and 2003 was a top three contributor to headline earnings from a total of nine operating divisions within Anglo American. In the period between 2004 and 2006 markets for paper and packaging products were challenging, characterised by production overcapacity and moderate demand growth. For European producers, the situation was exacerbated by the significant weakening of the US dollar against the euro, which reduced euro revenue generated from exports and encouraged competition from importers. In 2007, after a very difficult period for Mondi, Anglo American decided it was no longer a core asset and should be unbundled to shareholders. Given the improved outlook for the business it appeared to be the perfect time for a separate listing; unfortunately the global financial crisis put a premature end to the anticipated recovery in earnings. Mondi listed in July 2007 at R65, peaked at R70 in April 2008, and thereafter pretty much fell in a straight line to bottom at R17.51 by March 2009, trading at 40% of
tangible book value.

Mondi is currently trading at R59, only 18% below its peak of R72 reached in July 2011. Why are we still big holders of Mondi going into another period of global economic uncertainty – which many market commentators are comparing to the 2008 global financial crisis? The simple answer is that we believe the intrinsic valuation of Mondi to be materially above the current share price, and shortterm macro-economic uncertainty has to some extent already been reflected in the current share price. While it is understandable that many investors are fleeing risky assets in these uncertain times, particularly those with exposure to Europe, we strongly disagree with the view that the risk to Mondi in the current scenario is comparable to that of 2008.
Today, Mondi is stronger from both a financial and asset mix perspective. Going into the crisis the company was at the start of a three-year €850 million investment programme in two growth projects in Poland and Russia. Both these projects are now complete and shareholders will start to reap the benefits of these high-return investments made in the down-cycle. In addition, Mondi permanently closed a material proportion of its high cost capacity during the crisis, which further improved its cost position and industry demand/supply fundamentals. The balance sheet is now significantly stronger and with no major capital expenditure planned, free cash flow generation going forward is likely to be materially above historical levels. Overall, the industry is in better shape with inventory volumes generally lower and permanent capacity closures made during the crisis having improved industry demand/supply fundamentals. 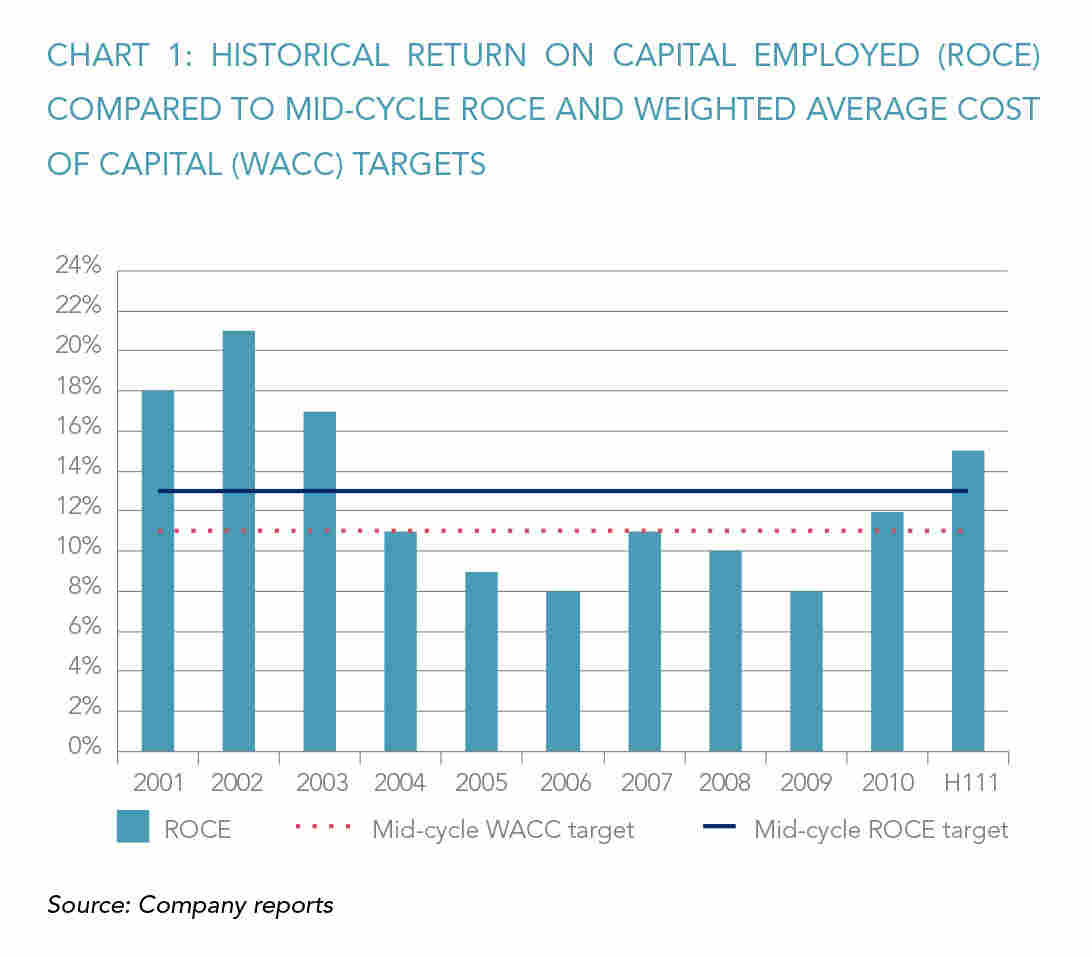 Some of the highlights which attract us to the Mondi business model are:

In our assessment, Mondi is trading at six times our assessment of normalised free cash flow, which we find extremely attractive. At current prices one is buying Mondi at book value. This means that the market assumes Mondi will not deliver returns in excess of their WACC through the cycle, which, as illustrated in Chart 1, has not been the case historically. Looking at consensus earnings for 2012 (already cut 35% over the last six months), Mondi is trading on a nine times PE and a 5.2% dividend yield to December 2012. The combination of a low earnings multiple on low earnings (free cash flow multiple even lower), definitely ticks the right valuation boxes, and as an added bonus you get an attractive forward dividend yield. One of management’s priorities for improved free cash flow generation going forward is increased shareholder distributions. The likelihood of either a special dividend or share buybacks over the next two years is therefore extremely high.

The investment case for Mondi is certainly not without risk. However, we believe investors are to some extent cushioned by the large margin of safety to our assessment of intrinsic value. The two primary concerns in the market currently are the macro-economic uncertainty and risk to near term earnings, and concerns that management might make a value destructive acquisition. The latter, we are less concerned about given management’s excellent track record in building the company through value enhancing acquisitions. The clouds on the economic front are certainly dark, but in the words of Warren Buffett: ‘the future is never clear, and you pay a very high price in the stock market for a cheery consensus. Uncertainty is the friend of the buyer of longterm values.’