Spar was founded in the Netherlands in 1932 as a means for small independent retailers to consolidate their buying power, enabling them to compete with the emerging formal retail chains. The business was originally known by the Dutch acronym ‘Despar’ (Door Eendrachtig Samenwerken Profiteren Allen Regelmatig), which in English translates to ‘through united co-operation everyone regularly profits’. The ‘De’ in the original acronym was later dropped.

Spar was launched in South Africa in 1963 (2013 marks its 50th anniversary) when a group of eight wholesalers were given the rights to use the Spar name. After subsequent corporate activity over the next two decades, Spar was acquired by Tiger Brands in 1988 and in 2004 unbundled from the group and listed separately on the Johannesburg Stock Exchange, giving investors direct access to the Spar business for the first time.

As a listed entity, Spar has performed exceptionally well. Since 2004, turnover and earnings have grown by circa 17% p.a., dividends by 24% p.a. and its share price by 27% p.a. (or 724% overall, with dividends reinvested). The business has a formidable infrastructure, with seven distribution centres servicing over 1 700 stores throughout South Africa (869 Spar stores, 561 TOPS liquor stores and 289 Build It stores). Internationally, Spar operates in 35 countries and, in terms of turnover, the South African business is the second largest (after Austria).

We find Spar’s business model to be attractive. The listed group essentially warehouses and distributes groceries and other products to independent retailers (store owners), who make use of the Spar brand. Marketing and the management of the Spar brand, however, remains the responsibility of the listed entity. What makes their operating model unique is that Spar store owners are not obliged to buy their products from Spar centrally. Essentially, the owners are independent retailers who benefit from being part of a bigger collective. Testimony to the fact that the business model works, is that Spar stores buy, on average, 80% of their goods through the Spar system. In turn, the fact that store owners are not duty bound to buy from the listed entity keeps Spar focused on continuously delivering the most competitive offering and
service to its store owners. Some of the benefits for Spar store owners include:

We believe there are a number of favourable attributes that support our Spar investment case:

Each Spar store represents its owner’s livelihood. The owner eats, sleeps and breathes for the success of his or her store; this passion and focus influences the overall group’s long-term success. The owner often comes from the same area as where his or her store is located and therefore has ‘better insights’ which enable them to tailor the store’s product line to the community’s preferences. In contrast, the more ‘corporate’ competitors like Pick n Pay (excluding their franchise business), Shoprite and Woolworths, have local stores typically run by store managers who are not owners and have less of a vested interest in the success of the business.

In addition, each store owner is responsible for the capital requirements of setting up and running a store. Consequently, the listed Spar business is capital light.

It would be very difficult for a new entrant to replicate Spar’s business. This is primarily a function of three factors:

Excellent financial metrics
Spar’s attractive business model (with its low capital requirements), high barriers to entry (giving it pricing power) and the non-discretionary nature of most of its product (which results in steady sales – people still need to eat, even in tough times) all contribute to excellent financial metrics and the sustainability of the business. Spar’s turnover growth and trading margins are relatively stable and its free cash flow conversion (effectively the percentage of accounting earnings that are distributable to shareholders as dividends or via share buybacks) is excellent (as is clear from the following charts). Furthermore, the capital Spar does retain, earns a higher return than the average South African business. Rare is the company that pays out over two thirds of its earnings as dividends, enhances returns via regular share buybacks and still grows earnings faster than the average business, as Spar has done consistently. 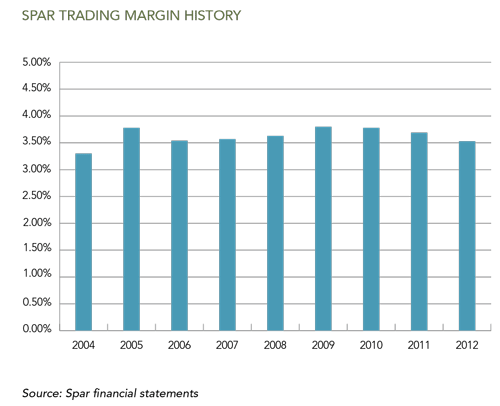 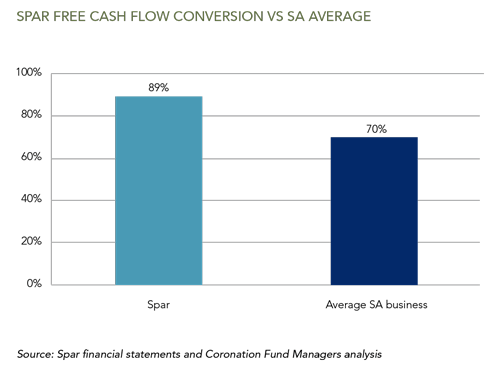 Spar’s high ROEs, superior free cash flow conversion and the increased stability/predictability of its cash flows give us the confidence to place a higher multiple on Spar’s earnings compared to the average South African business.

Spar is very competently overseen by its board and executive committee. The combined years’ experience of the CEO, CFO and COO at the group spans over seven decades. In all our interactions with senior management, heads of various distribution centres and the store owners, we are consistently impressed by the passion and drive they have for the business and constant desire to improve operations. Management has demonstrated to be excellent stewards of capital evidenced by a good growth track record, their ongoing search for new business lines such as Build It, and generous return of capital to shareholders via share buybacks and dividends.

The market, however, has a number of concerns around the Spar investment case, which are discussed in more detail below. Our view is that these concerns are overplayed as we believe the Spar business model and management will ultimately reward long-term shareholders.

The Spar model essentially has two mouths to feed: the listed Spar business and the independent retailer running the store. In order to compare Spar’s margins with those of its peers (Shoprite, Woolworths and Pick n Pay), we need to consider the two margins together. The listed Spar business makes trading margins of circa 3.5%, and our independent channel checks suggest that the average Spar retailer makes circa 3% – 4%. As an integrated business, Spar’s trading margins amount to between 6% and 7% (the two margins are, however, not additive). This compares to Shoprite’s trading margin of 5.8%, that of Woolworths at 6.1% and Pick n Pay’s at 1.4% (a fair normalised margin is arguably closer to 3.5% –4% for Pick n Pay). Spar’s trading margins are therefore as high, or higher, than its peer group.

It would be fair to argue that as competition increases, Spar’s higher margins will be put under pressure. Our view,
however, is that in Spar’s case there are certain structural differences that support the sustainability of higher margins:

Each store provides the livelihood for its owner. As a result, the owner will always focus and care more about cost control than would a corporate manager. Items like wastage, shrinkage and repairs receive greater focus and can add up to 1% extra trading margin versus a corporate competitor.

As each Spar store is individually owned, the owner is able to hire non-unionised labour. This allows them to better schedule staff, avoiding unnecessary overtime and generally pay lower wage rates. (Many stores also employ family members to help run the store). This can result in 1% – 2% extra margin.

Spar has a portfolio of stores that are located very conveniently, many of which are situated on busy high streets. As consumers become increasingly starved for time, many are willing to pay a small premium for the increased convenience.

What is the risk of competitors poaching Spar stores?

As the food retail market matures, coupled with an increased number of new entrants looking to gain a foothold into the market, sites become highly sought after. The risk is that competitors may try to expand their store bases by acquiring Spar stores from their individual owners and converting them to corporate-owned stores. While this is a real risk, one needs to bear in mind that Spar has lost very few of its stores in this manner over the last five years. What offers protection against such attacks on its store base include: head leases over many key sites; a right of first refusal over any sale of a store; and, probably most importantly, store owner loyalty to the Spar brand/system.

In our discussions with store owners, they state that they enjoy the freedom that the Spar model provides and are proud to be associated with a successful, entrepreneurial group.

How will Spar fare in a weak consumer environment?

A weak consumer environment will impact Spar in a number of ways. Lower consumer spending will put pressure on Spar’s same store sales (and those of competitors). However, given that Spar’s product is largely non-discretionary, its topline should be more resilient than that of the average company. A weak consumer environment could also put Spar’s store owners under financial strain. Poor cash flow for the store owner may consequently give rise to bad debts for the Spar group. The group may also find itself having to step in and take temporary ownership of stores that have become insolvent as a means to protecting their sites from being acquired by competitors. While these are legitimate concerns, the Spar group has shown itself to be resilient in past tough times. In 2009, shortly after the start of the global financial crisis, Spar wrote off R46 million in bad debts (2008: R22 million) and had R58 million in arrears at their year-end (2008: R35 million). However, R88 million was already provided for (2008: R52 million). While the percentage changes are large, they are not particularly material when compared against Spar’s earnings of circa R750 million in that particular year.

Spar stands out as a well-managed business that is more resilient than most. It trades on 14.5 times our assessment of normal earnings and a 4.5% forward dividend yield, which we think is attractive for an asset of this quality. In a market that is fully rated and trading close to all-time highs, we think Spar represents a good opportunity for long-term investors. The recent relative underperformance of Spar has given us an opportunity to increase our holding.

Nic stein joined the Coronation investment team in 2009 as an equity analyst. He currently analyses a number of shares spanning the retail, mining and financial services sectors. Nic is a Chartered Accountant (SA) and CFA charter holder.