South Africa currently enjoys the lowest interest rates in over 40 years, and there is every likelihood that the next meaningful move in rates will be up. Against such a back-drop, one would traditionally expect that as interest rates rise, banks will experience rising defaults and therefore struggle to grow earnings. Despite factoring in some deterioration in bad debts going forward, we believe that South African banks are well positioned to defend, and grow, off the current earnings base driven by the following factors:

In spite of this more robust earnings picture, the banking sector has de-rated relative to domestic industrial stocks as shown in the chart below. This presents us with an attractive long-term investment opportunity. Domestic banks have only been cheaper than current levels relative to industrials during the 2008 global financial crisis. 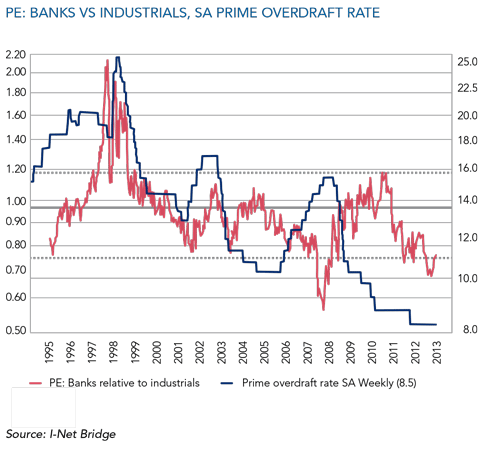 Within the domestic banking sector, Standard Bank continues to stand out as a very attractive long-term investment. In 2012, the group celebrated its 150-year anniversary, showcasing an impressive long-term track record of earnings growth and delivery of shareholder value in its publication Hoisting the Standard. Worthy of note in the long-term earnings progression for the bank (as represented in the chart below) is that it has struggled to grow earnings since the 2008 global financial crisis. 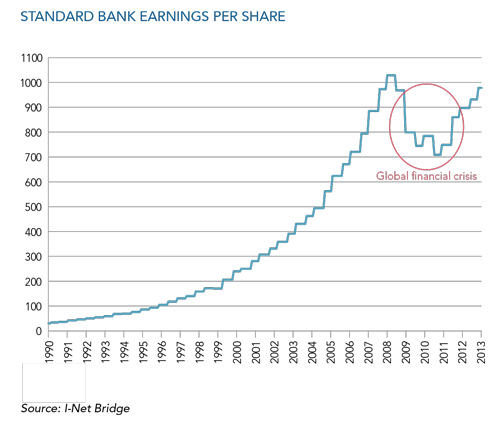 To understand the pressure on earnings that Standard Bank has experienced since 2008, it is important to revisit their strategy just prior to the crisis, as articulated in their 2007 annual report:

Standard Bank is a South African-based financial services group with a global presence focused on emerging markets. We operate from 18 countries in Africa and from 20 countries in other continents. – Standard Bank annual report 2007.

Prior to 2008, the bank adopted a strategy to grow into emerging markets around the world, in addition to Africa. This required significant investment into a central hub in London as well as acquisition of businesses in many markets outside Africa, such as Argentina, Russia and Turkey. The London head office facilitated the distribution of investments originated out of these emerging markets and housed highly skilled staff to aid in the execution of transactions across this vast network. As a consequence, a significant portion of the group’s capital was allocated to the London business.

All this changed in 2008. The global financial crisis was extremely negative for the international business model in a number of ways. 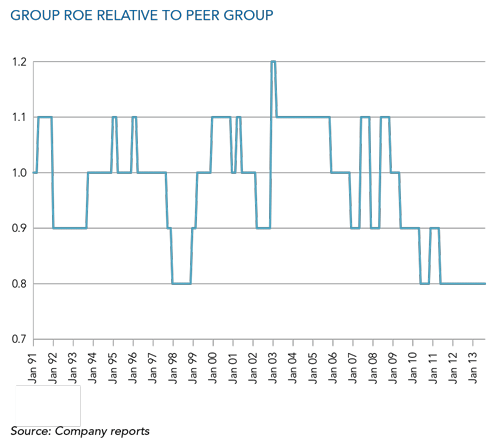 Clearly, as a consequence of the current relatively poor ROEs, Standard Bank now trades at a price to book discount to the weighted average of its three domestic peers, Barclays Group Africa, Nedbank and FirstRand, as shown in the following chart: 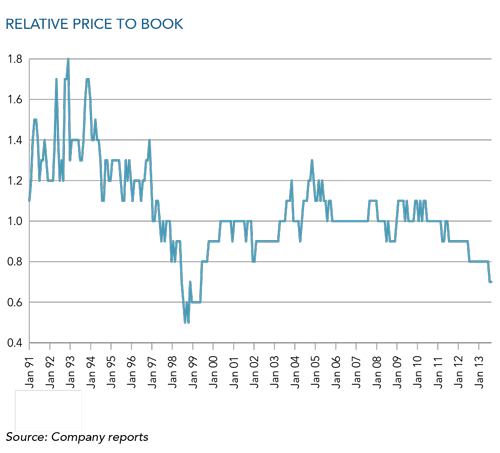 We believe that the current valuation presents the long-term investor with a very attractive opportunity going forward. While current returns may be lower, the long-term sustainable returns are, at least, the same or better than its peers’. Following Jaco Maree’s retirement, Ben Kruger and Sim Tshabalala were appointed as joint CEOs in 2012. The group is undergoing significant change to re-align with the new management team’s revised corporate strategy, as articulated in the following mission statement that was included as part of their 2013 first-half company presentation:

Our vision is to build a leading Africa-focused financial institution that delivers superior returns to all of our stakeholders. – 2013 Standard Bank interim results presentation.

Standard Bank has already exited most of its businesses outside of Africa that do not align with this strategy. Troika Dialog in Russia was sold in March 2011, followed by the sale of their investment in Standard Unlu in Turkey. In December 2012, it sold the majority of its holding in Standard Bank Argentina to ICBC. In addition to releasing capital for its African operations, it has freed up management’s time to drive the strategy in the African businesses.

The bank has undergone two large-scale retrenchments since 2008, which focused on the high-end skills in the London operation and those within its support structure in South Africa. As with all such interventions, the restructuring was very disruptive and has proved costly from a share-holder return perspective. This was a necessary medicine, however, needed to safeguard the long-term sustainability of the group. The London operation is now of a size that can be supported profitably by current revenues.

Standard Bank currently trades at a price-to-book discount to the weighted average of its peers on the basis of a lower current/near-term ROE, as shown earlier. The new management team’s target is to get the group ROE to 17% by 2016, driven by a number of areas as discussed below.

As at December 2012, Standard Bank had $1.4 billion capital allocated to the London PLC business, which translates to roughly 10% of group capital. This capital generated a loss of $351 million in 2012, severely depressing group returns. After the restructure of this business, the London PLC business should return to profitability while at the same time utilise less capital. This allows for the surplus capital within this business to be re-deployed to higher returning businesses in Africa and South Africa, and improve group returns. Furthermore, if the PLC business can be sold, this would unlock further capital for re-deployment into the group. Capital allocation is a key input into the strategy to bring the group returns back to an acceptable, or more normal, level.

The African operations currently generate returns far lower than what we would consider to be achievable and sustainable over the long term. A large part of this has been driven by the investment into the larger businesses in Nigeria and Angola, where earnings are still to come through. For example, the African business has been building a retail and business bank across the continent, which generated revenues of some R7.3 billion for the year ended December 2012, but contributed a small loss to the bottom line. A new management team has been appointed to lead the African business. Their objective for this retail business is to break even in the near term and grow to acceptable returns over the medium term. As the retail business moves towards profitability, Africa and group returns should improve. 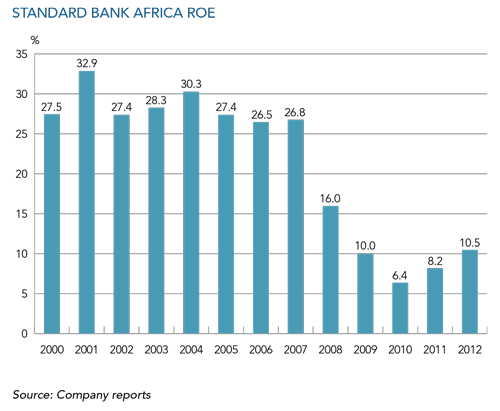 The re-alignment of the overall group cost base is, however, by no means complete. The South African business also scaled up in many departments to support the international ambitions of the former strategy. There is therefore an ongoing exercise to streamline and reduce backoffice functions like HR, compliance, finance, etc, to be relevant for the new, revised and significantly scaled-down group strategy. Managing down the cost base is one of the most important focus areas if the group is to deliver improving returns in an uncertain revenue environment.

Standard Bank has undergone what we believe to be a material strategy shift. The new CEOs, Ben Kruger and Sim Tshabalala, come from within the business and both have complementary skill sets that can be leveraged to the benefit of the group as a whole. The South African business should be able to defend and grow off the current earnings base as a result of the points discussed earlier but, over and above this, we believe that there are some company-specific opportunities that can be taken advantage of to bring returns back to a higher, sustainable level. Execution across the various markets and geographies becomes very important if this value is to be unlocked for shareholders. We feel the current valuation gives us ample margin of safety to mitigate against risks, and it allows us to patiently back the team at Standard Bank as they adopt and implement what we feel is a back to basics strategy for the group.