GDP data for the third quarter of 2010 came in at 3.2% year on year, showing that the South African economic recovery continued to gain traction. We anticipate GDP growth to have been 3.1% for the full year, and to rise closer to 4% this year.

The most striking outcome from the last set of GDP data has been the consumer recovery. Regular readers will know that we had been calling for this for a while, on the positive confluence of rising real wages, historically low interest rates, low inflation and a recovery in asset markets. Still, two consecutive quarters registering year-on-year growth of above 5% this early in the cycle was beyond our expectations (even factoring in a World Cup boost); and furthermore, momentum indicators imply that the good performance will continue for a while. Spending has been concentrated on goods (excluding services, it has actually now shown two consecutive quarters of growth above 7%), with durable goods in particular performing exceptionally well. This was to be expected as it is the most interest-rate sensitive sector, but again the growth rates actually registered were well beyond expectations – around 30% in both the second and third quarter of last year. We have revised our 2010 expectation for consumer spending up to 4.5%. To put this in context, our expectation of 2.7% this time last year was considered very optimistic at the time! 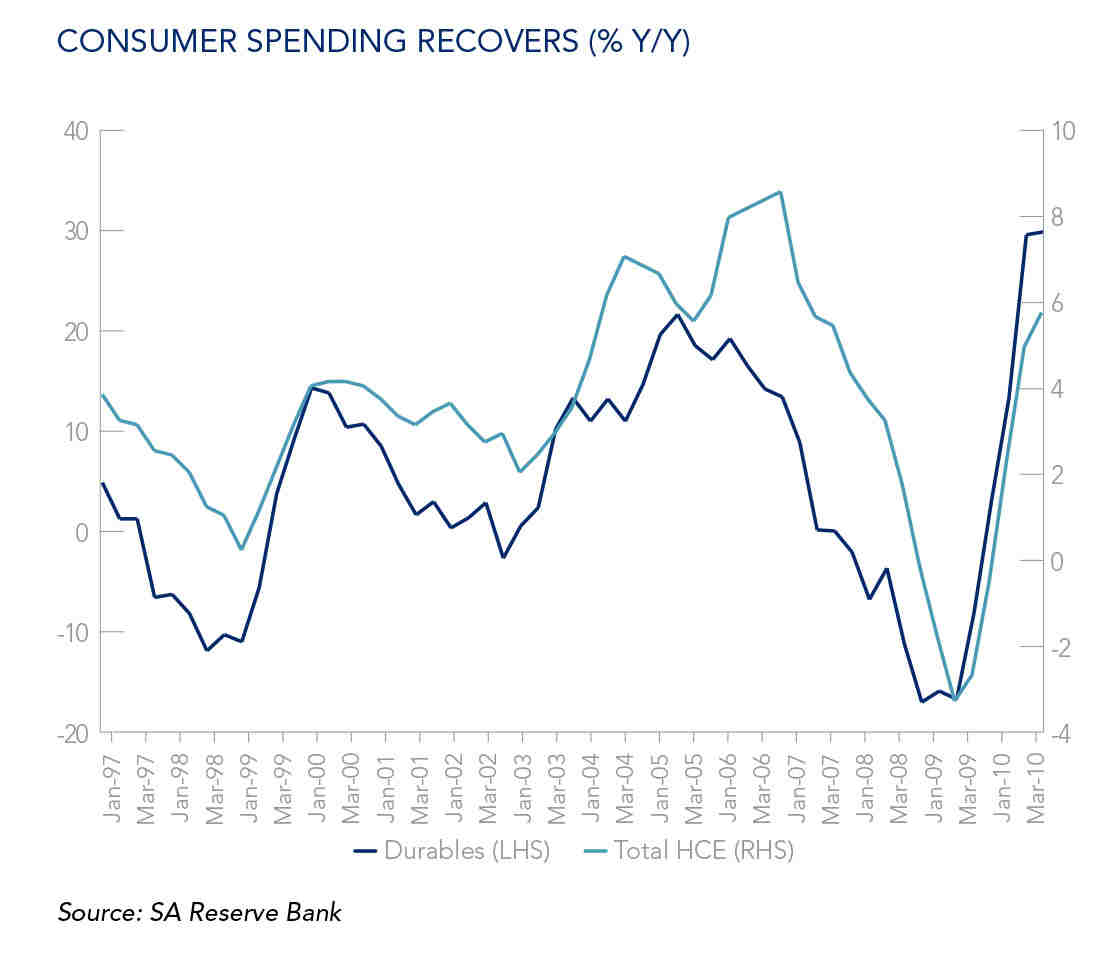 Although 2011 should see some waning of a number of these factors – inflation is set to rise, undermining real income growth, and there is a possibility of interest rates rising closer to year-end – in general the consumer environment remains supportive. As such, we expect consumer spending to grow by around  4.8% this year. Bear in mind that from current growth rates as mentioned earlier, this represents some loss of momentum over the course of the year, but it is still a solid performance.

By contrast, fixed investment growth (as measured by gross fixed capital formation – GFCF) has been very weak over the past year, though there are tentative signs it has troughed. GFCF has shown year-on-year contraction for five consecutive quarters and 2010 looks to have been the second consecutive year of overall contraction in this number. Parastatals have been the main backbone for GFCF growth over the past few years, though there seems to have been a significant slowdown in 2010. Although this was probably still positive for the year, it was not enough to offset contraction in both government and private sector investment. Private sector GFCF tends to dominate overall investment performance; even though its share of investment has fallen over the past few years, it remains the most important contributor at around 62% of total GFCF. Thus, a recovery in overall GFCF requires that private sector investment rises
too. Lower interest rates traditionally help here, and more signs of domestic recovery should help support business confidence, so we expect private investment to expand this year. However, recovery is likely to be modest and overall numbers from the public sector will probably not reach the heady heights of 2006 – 2008. We therefore expect relatively subdued GFCF growth of around 2.5% for 2011.

A solid growth performance and improvements in investment imply that import demand will remain strong (it has already picked up substantially). This will be reinforced by rand strength, which makes imports cheaper and thus supports import volumes. Export growth remains dependent on global economic conditions, where many analysts have been revising expectations higher. We are thus relatively positive on exports, but do not expect that improvement will be enough to offset the increase in import demand and thus expect that the trade balance will perform less well in 2011 than it did last year. Added to this, the third quarter of 2010 already showed a sharp turn for the worse in the services and income balance, and this is expected to worsen this year. Part of the reason is higher interest and dividend payments made to foreign owners of domestic securities, following large net purchases last year, and part is the expected
worsening in the services balance as the strong rand also makes foreign tourism more attractive for South Africans. The latter effect may be somewhat offset by what appears to have been a successful public relations campaign by local tourism bodies in the wake of the World Cup publicity. However, overall we expect the net effect of the above factors to result in a widening of the current account deficit from just over 3% of GDP in 2010 to around 5%. 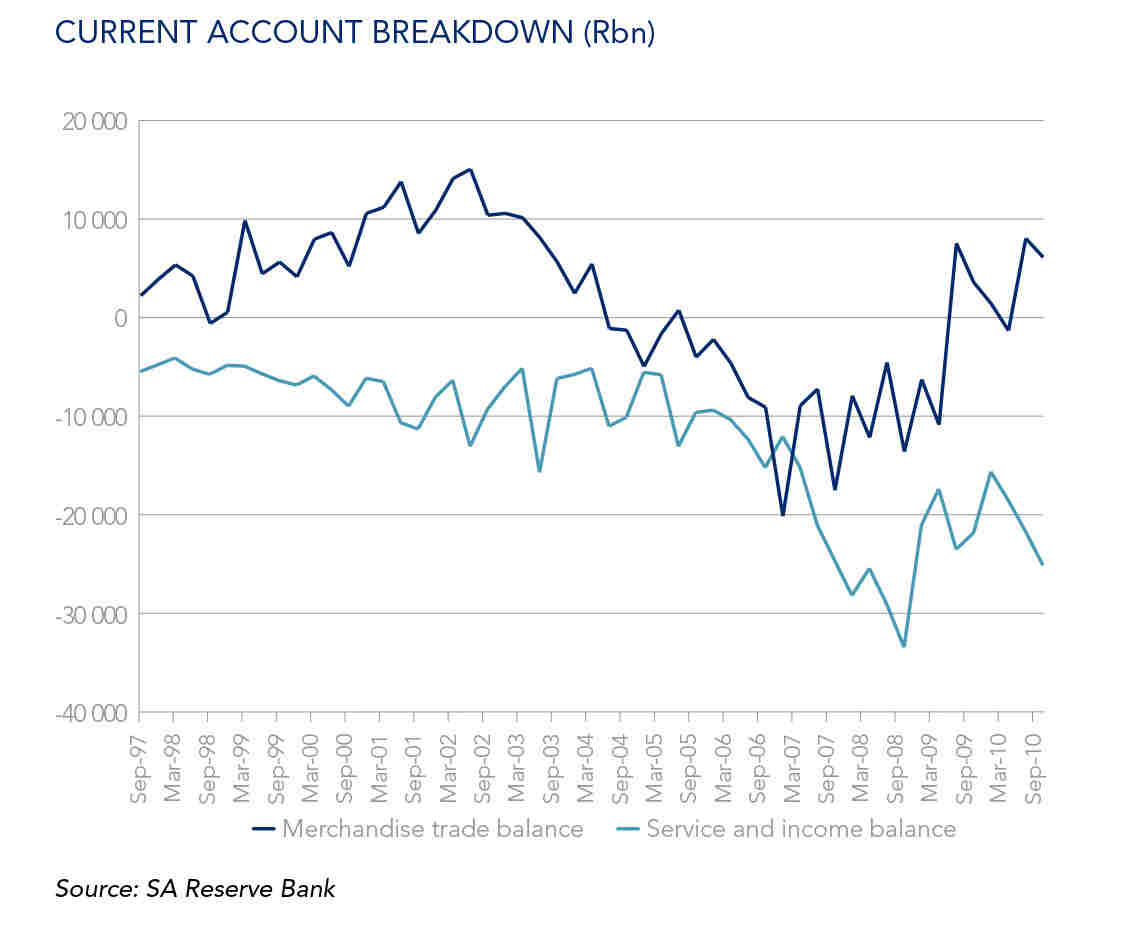 Unless capital inflows can be maintained at a very strong pace, this is likely to put pressure over the course of the year on what is widely considered an overvalued rand.

That, in turn, will have a negative effect on inflation. Already, we have begun to see indications that the positive effect of the rand is waning as the marginal rate of appreciation slows. In addition, more recently rand strength has not been able to offset higher commodity prices, particularly in oil and food. Food inflation was exceptionally low in 2010, averaging an estimated 1% last year. We expect food inflation will rise significantly in South Africa (in line with global trends), and this alone will probably be enough to see an upturn in inflation. Meanwhile, the petrol price has already risen 8% between September 2010 and January 2011 and may yet rise further. We remain concerned about other factors including administered prices, and think we could see CPI closer to the upper than the lower end of the target range by the end of the year. Coupled with some rand weakness, that may well result in interest rates starting an up cycle late this year.