We have long argued that a view that the rand would remain strong as long as US (and other developed country) interest rates remained low was too simplistic, viewing this as an unsustainable situation. The thinking behind this conclusion relates to the reasons behind the view of low rates. Rates are not low because this is a ‘Goldilocks’ world of low inflation and solid growth; they are low because of concerns about the direction of global growth and fears of a double-dip. This kind of growth background is not at all positive for South Africa: it weakens demand for our major exports, and it is likely to lead to a ‘risk-off’ scenario. Elements of this have started materialising recently, with the rand (and other emerging market currencies) experiencing a sharp sell-off in recent weeks. In the first nine months of the year, the rand was 22% weaker against the US dollar and over 18% weaker on a trade-weighted basis, with almost all of that having taken place in the most recent two-month period.

The implications for inflation are worrying should the rand’s weaker tone be sustained. Given the rand’s volatile history, we are loathe to immediately change our official forecast. We have already been of the view that a breach of the target range is likely by the fourth quarter of this year. The recent rand weakness will have some shorter-term impact (almost immediately through petrol and with a slightly longer lag to food), but most of the move should be reflected in next year’s inflation data. Should the rand’s current levels be sustained, and in the absence of any significant downward move in global commodity prices, the risk of a later and higher peak in CPI is a very real one. Clearly, currency moves are highly volatile and uncertain, but if current currency levels are sustained our CPI forecast would move from the current expectation of a peak just over 6% and a return to target in the first half of 2012, to one where the peak may be around, or over, 7% and there is no return to inside the target range in 2012 at all.

Such an outlook is exacerbated by stubborn cost-push pressures. In particular, lead indicators for food price inflation – which had earlier begun to indicate that a peak in food inflation was in sight – have started turning up again. Maize prices on SAFEX were around all-time highs at the end of September, and are up a startling amount on a year-on-year (y/y) basis (the number that matters for inflation) – white maize was up 69% y/y and yellow maize 53% y/y. These are important for local CPI, both directly in grains and indirectly via animal feed. Given the usual lag SAFEX prices have to food inflation, this implies we will see high food inflation into early next year at least; the recent rand moves may prolong this.

There is an argument that the SARB should ignore food inflation because it is ‘cost push’. While we understand the rationale behind this argument (and in general agree that central banks should accommodate first-round relative price changes), we do not really agree with it in the specific instance of South Africa. The main reason for this is that locally, food inflation is demonstrably a leading indicator of overall inflation. This is partly due to its relatively high weight in the CPI basket (14%) but, we think, is also because food price inflation is often used by
unions in wage negotiations (particularly when it is higher than headline inflation); in other words, food price inflation leads to second round effects. On a more technical note, we would also argue that even if one accepts the argument against responding to food prices, this is really only valid as far as fresh food is concerned. Processed food (which in our country accounts for close to half the food basket) has a significant non-food component in its price (wages, electricity and so on all affect the price of processed food products) and is thus already an indicator of second-round effects. We would note in this respect that in the latest CPI number, processed food inflation was 8.5%, compared to 6.3% for fresh food.

Given softer domestic growth (albeit partly due to strike action) against this negative inflation backdrop, the SARB is faced with some tough choices. There is a sense that inflation expectations are not as well-anchored in South Africa as they should be, and that the uptrend in inflation will have a negative effect on expectations going forward (and, in turn, on wage agreements, with the potential for further negative inflation implications, and so on). But inflation targeting does not take place in a vacuum – as is clear from the fact that inflation has been allowed to (significantly) exceed the upper end of the target range in each up-cycle since inflation targeting began (but has not been allowed to breach the lower limit on the downside). And it is pretty much widely accepted that we will breach the upside again this cycle. So shouldn’t the SARB cut rates again because growth is weak? 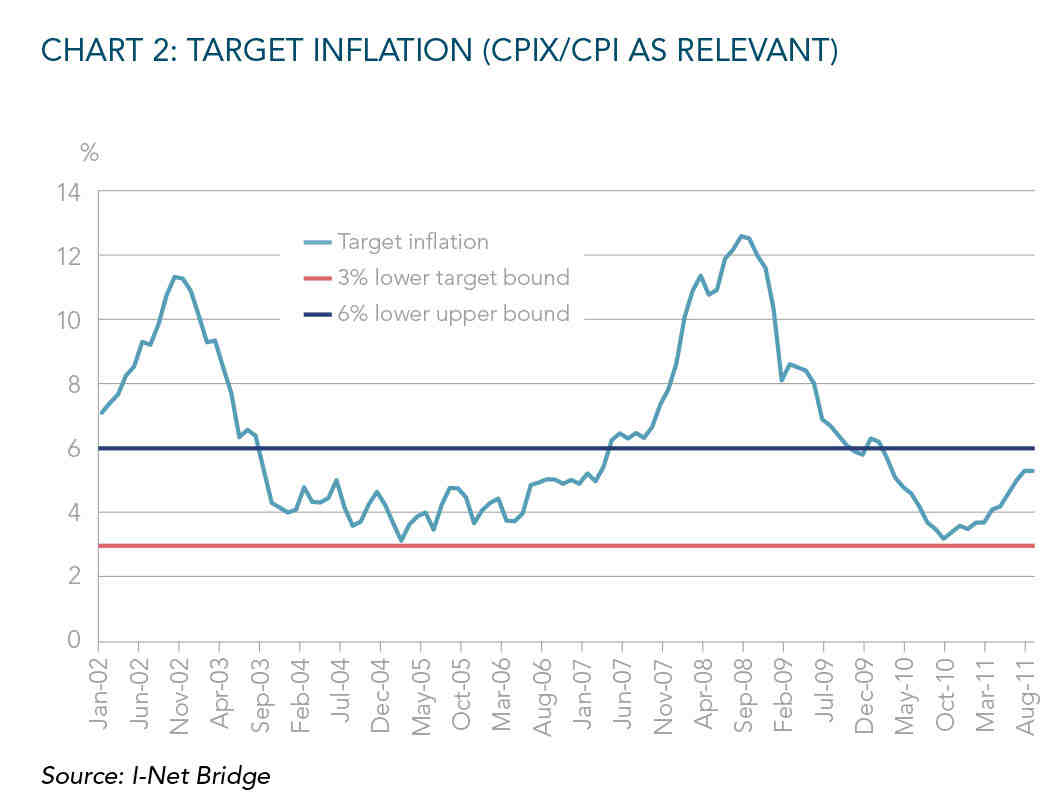 Here we would caution against a knee-jerk ’growth is weak, cut rates’ reaction – and not just because of questions about why growth is quite as weak as it is (i.e. partly due to strikes),
or how interest rates could address this. We are unsure about the benefits to South Africa of cutting rates further when it would neither address the problems exporters face which are global demand related, while it seems a counter intuitive move for consumers given the SARB’s oft-expressed concern that consumer indebtedness is too high. There are already signs that business fixed investment is picking up, but the constraints to investment have not been interest rates.

It is important not to just focus on the nominal level of rates. The repo rate has been at 5.5% since November 2010. At that stage, inflation was around 3.5% and we had a real repo rate of 2%. Currently, the real repo rate is barely above zero, and is expected to go into negative territory imminently. This means interest rate policy is already very accommodative. Furthermore, overall monetary policy is even more accommodative when one takes exchange rate movements into account (a weakening currency is equivalent to policy loosening). Estimates that take both measures (real interest rates and real exchange rates) into account show that overall monetary policy is currently close to its historically loosest levels.

Our feeling, then, is that the SARB should not cut rates any further. However, we cannot rule out a scenario where they feel under pressure to do so – and a scenario where further global weakness materialises in a way that flows through to South Africa might prompt this. We would note, however, that we believe this type of outcome (global weakness combined with an interest rate cut) would lead to more rand weakness and worsen the inflation outlook further. In particular, we are concerned about the precedent set in 2001, when the SARB cut rates in September as a number of global central banks did in the wake of 9/11, but it precipitated a sharp worsening in an already weakening exchange rate and helped lead a sharp rise in inflation the following year. We are concerned that a potential scenario is one where unions continue to demand (and receive) higher wages as inflation rises, but with businesses offsetting this by cutting jobs, resulting in an outcome of both higher inflation and higher unemployment. Whether or not this worse-case outcome materialises, we think South Africa is facing a ‘stagflationlite’ episode of some form, where below-trend growth and relatively high inflation will be with us for a while.