Our portfolios had a challenging quarter, mainly due to weak equity markets. Over more meaningful periods (10 years and since inception), they remain ahead of their respective benchmarks and peer groups.

The domestic equity market had a poor quarter, with the FTSE/JSE Capped All Share Index declining by 6.0% (and dragging down its rolling 12-month returns to 9.6%). The weakness was driven by industrials (-8%) and property (-20%), with the latter being impacted by the collapse in the share prices of the Resilient group of companies (to which our equity portfolios had no exposure).

During the quarter, we have taken some profits on our offshore equity positions and added opportunistically to stocks that are exposed to the local economy. Our preferred exposure is to the defensive names such as Netcare and Life Healthcare and food retailers (Pick n Pay and Spar) where we think valuations are still attractive. We currently have limited exposure to the South African clothing retailers given their stretched valuations, and we exited our position in Foschini as the business was trading above our assessment of fair value. We also sold most of our position in Discovery – again on share price strength.

The volatility in global markets created an opportunity for us to continue adding to our BAT position. Its share price declined by 16% over the quarter, partly on the back of sector rotation out of global staples and partly due to regulatory concerns around the threat of the US Food and Drug Administration’s intention to reduce nicotine consumption. BAT is currently trading on a 13.4 times one-year forward price earnings multiple and 10.4 times our assessment of normal earnings. This is incredibly cheap for a globally diversified business of this quality. BAT is now the single largest position within our equity portfolios. For a detailed review of our investment case, please <click here>.

In turn, we further reduced our Naspers position on the back of a very strong run in Tencent’s share price. It remains the second largest position within our equity portfolios.

While the resources sector declined 3.8% over the quarter, newsflow with respect to South African mining has been distinctly more positive in recent months. President Cyril Ramaphosa’s election has brought much hope and optimism to the country. With his long history of involvement in the mining industry, the hope is that the sector’s prospects improve. Our expectation is that the likelihood of increased policy certainty and a reduction in patronage and politically induced safety stoppages should go a long way to improve the operating environment for our local miners. Further, in early April, the South African High Court issued a declaratory order effectively recognising the principle of ‘once empowered, always empowered’. Legal recognition of this principle will remove the risk of ongoing dilution of ownership for equity holders.

While high commodity prices have reduced the margin of safety in resource valuations, we continue to maintain reasonable exposure to resources in our equity portfolios based on our assessment of long-term value. Our exposure is concentrated to selected stocks such as Anglo American, Northam, Mondi and Sasol.

The financial sector continued its post-ANC elective conference rally, with banks (+4.2%) and life insurers (+1.2%) ending the quarter in positive territory. We have added to our Investec position during the period. Investec was a standout laggard amid the strong run in domestic banks, given the market’s preference for banks with more exposure to domestic South Africa in anticipation of a strong economic recovery. Investec is currently trading on less than a 10 times one-year forward price earnings multiple, c. eight times our assessment of normal earnings, and also offers an almost 5% dividend yield. We think the valuation is very attractive. In addition to Investec’s South African bank, one is buying a high-quality asset and wealth management franchise as well as a UK banking operation where the earnings base is currently low (and where there is upside optionality should Investec be successful in pursuing its UK private banking aspirations). 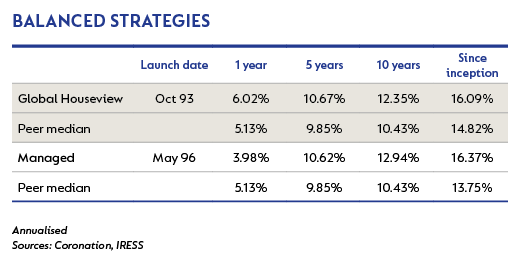 The global economy is experiencing a synchronised recovery with signs of inflation returning. This, coupled with central bank policy rates that we believe are still too low for a non-crisis global economy and US president Donald Trump’s tax package – which will provide further economic stimulus – makes it appear almost inevitable that interest rates will eventually have to rise to more normal levels. Naturally, this will have knock-on implications for the pricing of all risk assets and we would temper expectations around equity market returns relative to the strong gains we have experienced in recent years. Our balanced strategies continues to have no exposure to global bonds, given our expectation that bond yields will move higher.

Locally, the good news post the ANC’s elective conference in December has continued. The decisiveness with which president Ramaphosa made credible appointments in certain key ministries, together with a sound 2018/2019 Budget, was rewarded when Moody’s raised the outlook for South African sovereign debt from negative to stable and maintained the country’ sovereign rating at Baa3, which keeps it in the Citigroup World Government Bond Index. Further, GDP data for the last quarter of 2017 beat expectations at 3.1% quarter on quarter versus the market expectation of 1.8%. Improving inflation expectations gave the South African Reserve Bank room to cut the repo rate by 25 basis points to 6.5% and opened the door to further rate cuts later in the year.

Given the improved political and economic outlook, the rand continued its December rally and ended the quarter 4.7% stronger against the US dollar and 2% stronger against the euro. Domestic bonds also had a very strong quarter, with the All Bond Index closing the period up 8.1%, making South African government bonds one of the best performing, globally, for the quarter. Our low exposure to domestic fixed-rate bonds detracted from performance over this period. However, we believe that South African fixed income assets are currently fully priced and are reflecting much of the good news for the local economy. Furthermore, local bond yields provide very little cushioning against a further increase in global inflation and a rise in developed market bond yields. We therefore continue to maintain very low exposure to fixed rate bonds.

Our underweight position in fixed rate bonds is partly offset by our overweight position in listed property – especially the A property shares, which we believe offer very attractive risk-adjusted returns. The UK property sector also appears to be coming back to life after the economic uncertainty surrounding Brexit. Initially sparked by the Hammerson all-share offer for Intu in December, Hammerson ultimately became an acquisition target in March following the French-listed real estate investment trust, Klépierre’s, proposed cash and scrip offer. Although Klépierre’s proposal represented a c. 40% premium to the undisturbed Hammerson share price just prior to the announcement, we still believe that at a c. 20% discount to Hammerson’s recently reported net asset value, the potential offer significantly undervalues Hammerson’s equity. (Subsequent to quarter-end, Klépierre revised its proposed offer but this too was rejected by the Hammerson Board. As a result, Klépierre withdrew from making any further proposed offers.)

From an asset allocation point of view, there have been no material changes to the structure of our balanced portfolios this past quarter. Material changes within the equity bucket are discussed in the prior section. 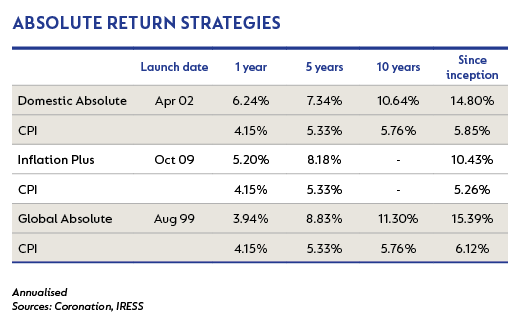 Our absolute return portfolios have the dual mandate of beating inflation and protecting capital over shorter time periods. While the short-term performance has been disappointing, the strategies remain comfortably ahead of their respective performance targets over the long term.

Given the backdrop of elevated market levels in the US and the potential damaging impact of a US/China trade war on the global economy, we anticipate increased levels of volatility as the rhetoric surrounding global trade continues.

Locally, although the economic outlook for the country has improved, we would caution that many domestic assets have already priced in a fair amount of the good news. It is important to note that South Africa still faces a number of structural challenges and there are risks associated with the implementation of some of the proposed changes.

Against this backdrop, our portfolios remain defensively positioned, and while this has been a drag on performance in 2017, we believe it to be the correct and prudent approach.

Over the quarter, we took advantage of the market sell-off, increasing the strategies’ allocation to domestic equity through the purchase of index futures and adding to our positions in BAT and Investec. We trimmed our holding in Naspers and exited positions in Foschini, Mr Price and Coronation on the back of strong share price performance and a reduced margin of safety.

We also reduced the strategies’ allocation to domestic property by trimming positions in Growthpoint, Hammerson and Redefine into strength. We further reduced exposure to local government bonds as, in our view, valuations are not attractive on a risk-adjusted basis.

In the case of Inflation Plus and Global Absolute, no meaningful changes were made to the portfolios’ offshore asset allocation. We believe this allocation remains appropriate given the benefits of diversification, value in the underlying offshore assets and our expectation of future rand weakness.

In an incredibly uncertain world, we continue striving to build diversified portfolios that can absorb unanticipated shocks. We will remain focused on valuations and seek to take advantage of whatever attractive opportunities the market presents to generate inflation-beating returns for investors over the long term. While we are cognisant of the fact that we have not delivered inflation-beating returns in the recent past, we remain confident that the positioning of the portfolio and our investment approach for these absolute return portfolios should deliver inflation-beating returns consistent with its long-term track record.