PROGRESS IS RARELY made in a straight line and there are always bumps in the road, but ultimately, what matters is the direction you are heading in. It is now just over a year since the World Health Organisation declared Covid-19 to be a global pandemic and the world went into lockdown. The difference now, however, is that we have several viable vaccines that will help stave off serious infection, lessen the pressure on healthcare systems and, hopefully, return our lives to some version of normality. There are concerns that new variants might reduce the efficacy of vaccines; that the vaccines might not be rolled out expeditiously; and that second, third and fourth waves will delay the global recovery. Ultimately, there is light at the end of the tunnel, and it doesn’t look like another train!

South Africa remains precariously placed in the global recovery due to its stretched public finances, a glacial pace of reform implemen­tation and the leisurely rollout of its vaccina­tion programme. Following a strong start to the year, South African government bonds (SAGBs) gave back a portion of their initial gains due to concerns that the large amount of global fiscal and monetary stimulus would stoke inflation, hence forcing a quicker normalisation in policy rates. The benchmark 10-year SAGB rallied to 8.75% by the beginning of February, but sold off by over 100 basis points (bps) by the end of the first quarter (Q1-21), ending at 9.89%. This resulted in the All Bond Index (ALBI) returning -1.7% over the quarter, which was anchored by the under­performance of the 7- to 12-year area of the curve.

SAGB yield movements were not dissimilar to the experience in many emerging markets around the world, as a reaction to a c.80bps selloff in US 10-year yields. Conversely, South African inflation-linked bonds (ILBs) produced a return of 4.6% in Q1-21 as real yields held onto their gains since the beginning of this year. Due to March 2020 being the peak of the Covid-19 crisis in financial markets, the one-year performance of SAGBs and ILBs looks spectacular, at 17% and 16.7%, respectively.

South Africa’s Budget speech in February was an important marker on the country’s recovery path. Following better-than-expected tax revenue receipts, the National Treasury presented a picture of public finances that was much better than the October 2020 Medium-Term Budget Policy Statement, but still not indicative of debt stabi­lisation. It was very encouraging that the tax windfall was not used to increase expenditure in other areas, but instead used to reduce the borrowing requirement over the forecast period. This resulted in a reduction in weekly nominal fixed rate issuance by c.30%, which was welcomed by markets and resulted in the relative outperfor­mance of the 12-year+ area of the curve. However, implementation risk remains high as all the expen­diture consolidation is focused on a three-year public sector wage freeze, which has already been rejected by public sector unions.

In addition, State-owned enterprises (SOEs) and local municipalities are a further risk to expenditure, given their poor health going into the Covid-19 crisis. Long-term austerity is not palatable in South Africa given the size of the expenditure adjustment needed to right the ship. To keep from sinking, South Africa needs to increase its potential growth rate by accelerating its reform process and bringing in the private sector.

There are early signs that the private sector is starting to contribute to investment, but for this to be sustained, policy needs to be transparent and stable. It is also essential that previous perpe­trators of corruption are brought to justice to show that there are real consequences for malfeasance. Unfortunately, given the country’s poor track record, investor confidence remains depressed, which is abundantly reflected in the elevated level of bond yields and the steepness of the yield curve.

INFLATION IS THE KEY NEEDLE IN THE DIAL

The positive showing in the February Budget should have resulted in an extensive rally and flat­tening in the South African bond curve. However, due to the selloff in global rates, this was cut short and reversed. In January 2021, short-term inflation expectations in the US, as reflected by market-implied breakeven inflation expecta­tions (the difference between US nominal and ILB yields), moved materially above 2%, peaking at 4% for one-year forward inflation and 2.5% for five-year forward inflation. Now, across all maturities, this sits at around 2.3% to 2.5%, which means that the market expects inflation in the US to average above the 2% average inflation target set by the Federal Reserve Board (the Fed). This change in inflation expectations was driven by the Fed’s change to average inflation targeting (i.e. rather than aiming to keep it at a target point); the unprecedented level of monetary policy stimulus (zero base rates and the bond-buying programme); and increased fiscal stimulus (approval of the Biden $1.9 trillion support package and the proposal for a further $2.2 trillion infrastructure spending package). The question facing investors is whether this repricing is sufficient and if emerging markets can stomach these higher levels of US rates.

During 2013, financial markets experienced a similar magnitude of re-pricing in global bond yields, which propelled emerging market and South African bond yields materially higher. The reason for this was that, fundamentally, emerging markets and South Africa were much more vulnerable to capital and portfolio flows, given their large external funding requirements (reflected by the current account deficit), foreign ownership/ involvement in local emerging economy bond markets was high, inflation was uncomfortably high, and valuations were full, if not expensive.

The shaded area in Figure 1 denotes the 2013 taper tantrum that started in March of that year when the then-Fed chairman, Ben Bernanke, first signaled the intent to start the tapering of asset purchases. At the time, inflation expectations were around 2%, which was the Fed’s target. US 10-year yields sold off 120bps and US five-year rates in five-years’ time (5y5y yields – a proxy for forward expecta­tions of interest rates) rose 150bps. Since January of this year, US 10-year yields have sold off 80bps, 5y5y yields have risen 110bps and inflation expec­tations have gone up 50bps. 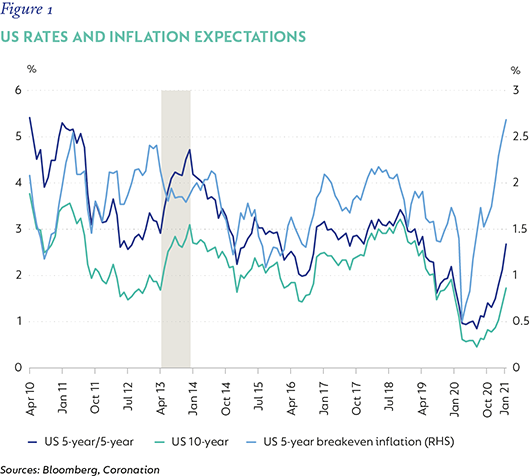 This recent move has come despite the Fed recom­mitting to keep rates at zero until 2024 and to make no move on the tapering of bond purchases. The Fed’s commitment to keep rates at zero and average inflation around 2% means that current expectations that are priced into the market are fair. The US 5y5y currently trades at 2.6%, which implies that if real policy rates in the US are kept between 0% and 0.5%, average inflation in the US will be 2% to 2.1%, which is in line with the Fed’s current mandate. 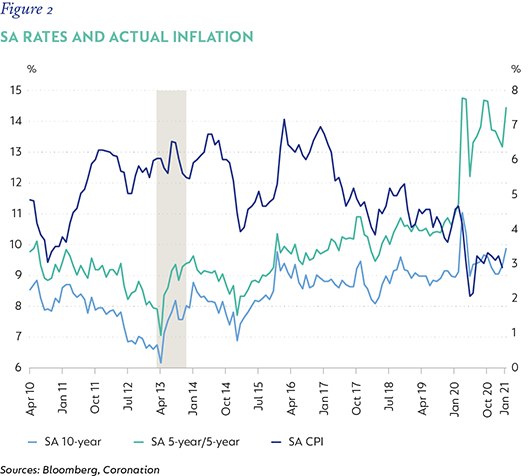 In addition to this, South Africa’s current account is in surplus (against a 6% deficit in 2013) and foreign ownership of the local bond market is sub-30% (versus above 40% in 2013) – see figures 3 and 4. This suggests that not only are valuations materially more attractive, providing a larger buffer, but also that the need for external funding of the deficits is much lower. 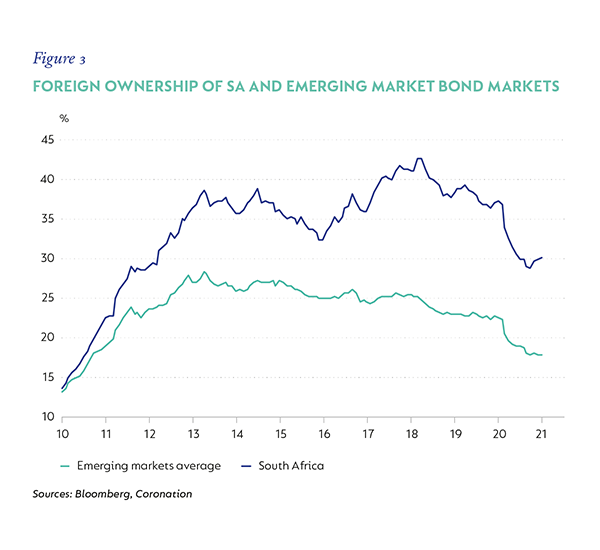 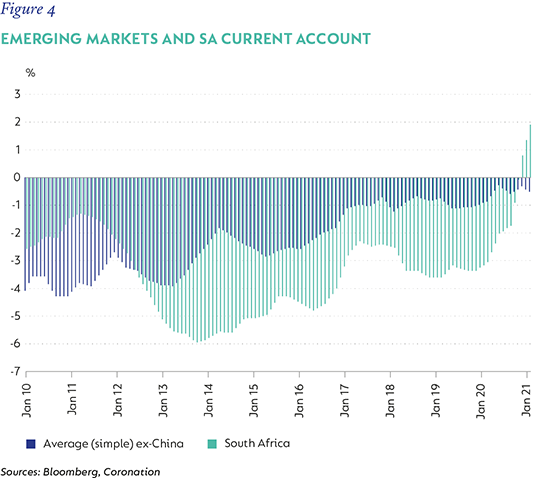 The conclusion from this analysis is that South Africa is specifically much better placed from an economic cycle and valuation perspective compared to the 2013 taper tantrum. US rates have had a significant re-price, and although the absolute level of 10-year rates remains quite low, the forward-looking expecta­tions built into those rates suggest that (barring any surprise shocks) they are adequately priced. SAGBs still trade relatively cheaply, given that they still trade at multiples of cash, and are among the highest yields in the emerging markets universe (both from a real and nominal perspective). The curve remains steep and their embedded risk premium remains high, due to the underlying fiscal risks. Although fiscal risks remain elevated, recent policy actions by the National Treasury and government have managed to buy us more time to right the ship, which makes the yields on offer even more ripe.

ILBs provide diversity to a portfolio, given their low long-term correlation to nominal bonds (c.50%), and offer protection against higher-than-expected inflation, given that their outstanding principal grows in line with inflation. In Figure 5, we show various maturities of ILBs, together with their real yields, what the equivalent nominal yield is at 5% inflation, what the equivalent nominal bond of the same maturity trades at, and the breakeven to cash. Despite the longer maturity of ILBs trading at high real yields, these yields are not attractive compared to fixed-rate nominal bonds and have a low breakeven to cash because of their high modified duration (capital placed at risk to interest rate movements), making them an unat­tractive investment. However, the short-dated ILB (four years) provides an attractive opportu­nity, given its greater than 100bps yield pick-up relative to its equivalent nominal bond and, hence, its higher breakeven to cash. We view this as an attractive opportunity to invest in an instrument that provides diversity and an attractive yield pick-up. 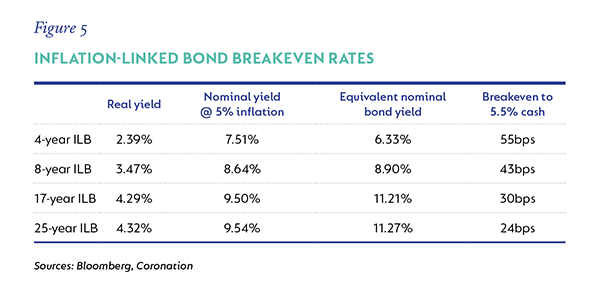 Credit spreads (Figure 6) in South Africa are back to levels seen pre-Covid-19. This suggests that credit fundamentals are as sound, if not better, post the pandemic fall-out. Unfortunately, this is not the case and the contraction we have seen recently in credit spreads just mimics the global phenomenon of credit spread compression. Global corporate issuance levels are higher than they have ever been, but any yield pick-up is being swallowed up since government bond yields are at zero and central banks are even buying corporate bonds in the secondary market. Locally, the situation is very different, as government bond yields remain elevated (above corporate bonds even), there is no buying of corporate bonds by the central bank and net issuance of corporate debt is declining as companies have pulled back on new investment activities. This reduced net issuance, combined with the large amount of liquidity, is the major reason for the compression of credit spreads. Underlying fundamentals remain negative, as bank credit loss ratios (Figure 7) are elevated, suggesting underlying stress in lending books and, hence, corporate South Africa. As bottom-up, valuation-driven investors, we do not believe that the current levels of credit spreads offer suffi­cient compensation for the underlying risk and we would avoid of corporate exposure at current spread levels. 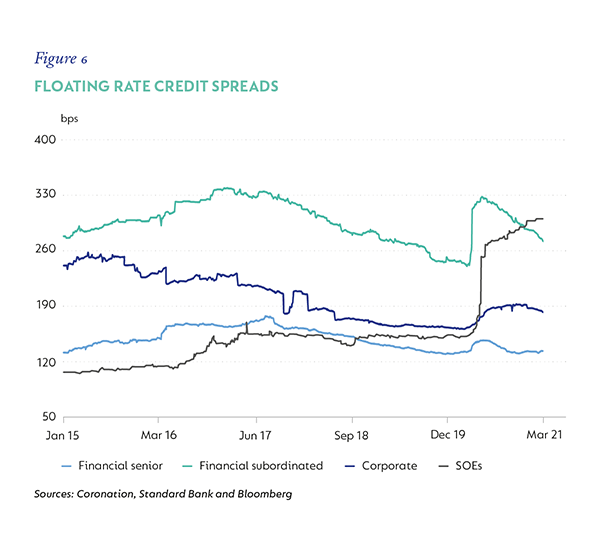 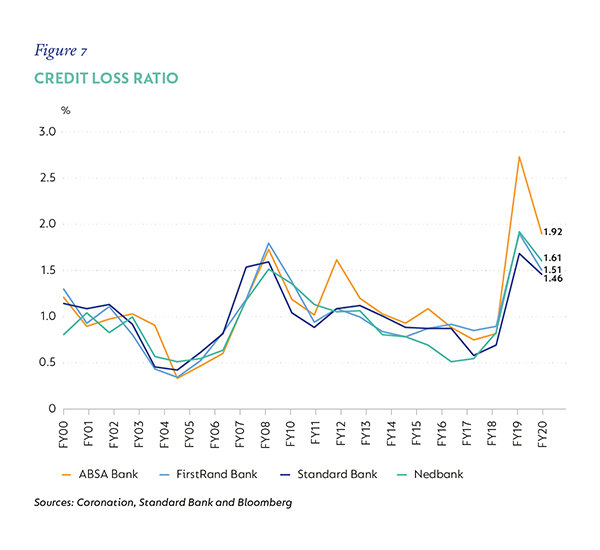 South Africa remains in a delicate balancing act. In the short term, inflation will remain under control and growth will pick up, supporting a cyclically better economic outcome. However, the fiscal accounts are problematic, given the high levels of debt. While the cyclically better economic outcomes have provided some breathing room, there needs to be an acceleration in growth-enhancing reforms, more emphasis on reviving private sector confidence to encourage investment and no deviation from current expenditure plans. The recent move higher in developed market bond yields has sparked concerns about a replay of the 2013 taper tantrum; however, South African bond valuations are much more generous now, with a much-reduced external funding requirement. We view SAGBs as an attractive investment oppor­tunity and would still advocate an overweight position relative to benchmark for a bond fund. In addition, we would also allocate to four-year ILBs and steer clear of corporate credit spreads at current levels.+