WHEN IT RAINS ON YOUR PARADE

The recent downpours have been a welcome relief for drought-stricken Cape Town! With it comes the confirmation that the city has staved off the possibility of Day Zero - the highly publicised date on which it was at risk of having to switch off its water supply. Despite this and the relaxing of water restrictions that will inevitably follow over the medium term, the city does illustrate the stark and significant effects of climate change and the behavioural adjustment needed for the 'new normal'.

It is impossible for me to write this quarter’s column without referencing the bumper sports season we have just seen. For SA, it all started in early June when the Springboks (that’s the South African rugby team for our international readers) returned to form by winning the test series against England – led by Siya Kolisi. Then came the FIFA World Cup 2018. Both my eight-year old son and nine-year old daughter are soccer crazy – so it’s been a month filled with lots of sport watching, anxiety, tears and statistics. And the sensations – Gareth Southgate’s waistcoat mania, the small country of Croatia with the biggest heart and French teen Mbappe showing signs of the brilliance that made Pele one of the greatest. I did not go into this World Cup supporting France, but one has to admire the joy and fun this team showed on the field and on the sidelines throughout the tournament – reminding us what the sport is all about in the first place. But, even the pouring rain did not deter their parade. The world was amused with officials making sure to quickly cover Russian President Putin with an umbrella while French President Macron and Croatian President Grabar-Kitarović were left drenched – though both handled it with the utmost grace resulting in global respect for them to skyrocket.

And then there has been President Trump and his unique brand of geopolitical chaos and “Fake Schmooze” (as the Sun newspaper aptly wrote). From trashing friends and flirting with foes in recent meetings with North Korean President Kim Jong-un, the NATO allies, Queen Elizabeth II and UK Prime Minister Theresa May, there has been no shortage of bizarre rhetoric. But probably the most baffling was the meeting in Helsinki between Trump and Putin. The less said about that at this stage, the better.

While on the theme of rain, it seems appropriate to acknowledge the drama in northern Thailand as 12 boys and their soccer coach became trapped in a water logged cave system, lengthening what was meant to be a one-hour excursion to an 18-day ordeal.  It turns out that the coach had previously spent time as a Buddhist monk and taught the boys how to meditate during their dire experience. Finding a state of calm amid terror and impossible odds is a lesson for us all in how to cope under extreme stress. For investors, it offers an example of the importance of remaining rational, unflustered and staying the course.

As a long-term investment manager, our constant challenge is to differentiate between newsflow which is short term and noisy and should be ignored, and newsflow which has a meaningful impact on the long term and leads to an impact on portfolio positioning. The boys’ safe rescue was an incredible feat, showing that, through bringing together a team of experts with a common cause, you can harness their collective power and achieve the extraordinary - something we work hard to do every day for our clients.

The last few months also provided a much needed reality check-in on the South African economy, as Coronation economist Marie Antelme unpacks in her comment. This is after the high levels of Ramaphoria experienced by the country (and the global investment community) at the beginning of the year. It is a stark reminder that, just like the decline of our dam levels, the deterioration in our political and economic health took a long time, and so will the remedy. Positive intent and feeling better have not been enough to motivate consumer spending overnight and boost growth.

But a lot has been done to start healing ailing parts of the South African political system in both ministerial and institutional areas. It was never going to be easy, and we are constantly reminded of the deeply entrenched vested interests. In addition, there is much work to be done to remedy broken parts of both the public and private sectors.

FEATURED IN THIS EDITION

The term ‘Trade War’ has come back into our common vocabulary as if this is something familiar and easy to understand. It is not. A trade war is essentially the escalation of the ‘tit-for-tat’ imposition of trade barriers, usually tariffs, on imported goods to protect local industries. Escalation in this behaviour tends to create ill will, raise costs, disrupt production, damage confidence and affect both growth and asset prices.

A brief glance into history shows trade wars tend to end badly. The first time when a government deliberately raised import tariffs sharply to protect domestic industry was in the US in the 1930s. Republicans then were protectionist, inward looking and Herbert Hoover campaigned on a ticket to protect the farmers. Is this sounding familiar? While the direct impact on asset prices is hard to assess given the timing of the stock market crash in 1929, the trade wars of the 1930s undoubtedly extended the impact of the Great Depression.

Back to the present, the trade wars initiated by the US have been escalating and we asked Professor Barry Eichengreen, internationally renowned economist and expert on the topic, for his insight on the dynamics of how this is playing out.

On a musical note, I hope you enjoy investment analyst Chris Cheetham’s article on the revival of the global recorded music industry.  Led by streaming platforms such as Spotify and Apple Music, people are listening to more music than ever. We expect these platforms will gain more power over time, controlling a rapidly growing share of music distribution.

Locally we look at a South African success story, Aspen Holdings. Through a series of smart acquisitions, it has transformed itself into a global, geographically diversified pharmaceutical company.  Quinton Ivan, head of Coronation’s South African equity research, details why we believe it offers compelling value.

Thorough proprietary research is a key part of our investment process to get us to what we believe is a stock’s fair value.  In frontier markets, where the scarcity of information is not unusual, this research process is exceptionally rigorous. In Greg Longe’s article "Treasure Hunting"  he demonstrates how it is not about what you choose to buy, but also what you choose not to buy which can add significant value for our clients.

In August, we will be celebrating Women’s month. I thought it relevant therefore to pen some thoughts on the issue which you can read here.  At Coronation, we believe we are addressing gender diversity and equality at all levels.  We are excited about our upcoming 2018 Women’s Day event, for our South African female clients, staff and for a selected group of schoolgirls, which will take place on 1 and 2 August in Johannesburg and Cape Town respectively. The keynote speaker is Olympic gold medallist Dame Kelly Holmes who I had the pleasure of meeting recently.  She will share how she overcame her disappointments and persistent injuries to become the first female athlete to win double gold for the 800m and 1 500m races in a single Olympics.

Another special guest at the Women’s Day events will be Kirsten Visbal, celebrated sculptor of ‘Fearless Girl’. The statue, which stands facing the Wall Street Bull in New York, sends a strong message about workplace gender diversity, encouraging companies to recruit women to their boards. The plaque below the statue reads "Know the power of women in leadership. SHE makes a difference."

We have had no shortfall of excitement and newsflow over a wide range of topics. It is one of the reasons the half-year vacation I took with my family was vital. We visited Slovenia – a magical and picturesque country often ignored by the mass tourists.  The time spent exploring its lush and green countryside was just the refresh we needed – I highly recommend you add this destination to your bucket list.

Lastly, on 1 July 2018, Coronation celebrated its 25th birthday. A big shout out to all the staff and stakeholders who have been part of the journey and played a role in our success. In particular, I want to offer a great thanks to the clients who have supported us along the way. Without you, we have no business and the privilege of managing your money is not something we ever take for granted. 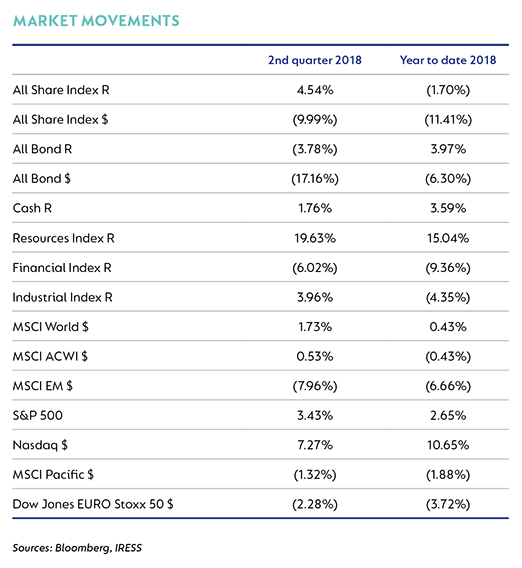