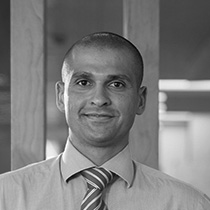 Duane is Coronation's former head of SA Equity and co-manager across all the Absolute Return strategies.

The recovery in commodity prices continued into the second quarter with some of the notable moves (in US dollars) being a 25.4% increase in the price of oil, 7.2% in gold and 5.0% in platinum. The recovery in commodity prices provided a tailwind for resource shares, with the local resources index increasing 6.4% over the quarter, outperforming industrials (0.5%) and financials (-4.3%). However, the longer-term underperformance of resources relative to industrials and financials remains stark.

The UK referendum on membership of the EU certainly dominated the headlines during the second quarter of 2016. As the surprise result of the referendum (52% of voters supported leaving the EU) flashed across news screens on 24 June, we saw a significant sell-off in risk assets around the globe. The pound also significantly weakened against the US dollar, to levels last seen in the mid-1980s. Increased levels of uncertainty pose the biggest risk in the wake of the Brexit vote. Already, the global economic outlook in the aftermath of Brexit has deteriorated as investors and consumers delay spending decisions amid the uncertainty.

It is hard to believe that nearly eight years after the global financial crisis, markets remain dependent on unprecedented monetary stimulus. Our base case remains that the pace of interest rate normalisation will be gradual and that interest rates will remain at historically low levels for even longer. The large-scale monetary stimulus and record-low (in some cases even negative) interest rates are continuing to inflate financial assets around the globe as investors search for yield on their investments. Although we must be close to reaching the limits of further monetary stimulus, most governments are still able to deploy fiscal stimulus (i.e. an increase in public spending or reducing tax to encourage economic growth). The increased levels of frustration among the working class around the globe about the lack of economic growth and rising unemployment levels will continue to add pressure on politicians to use whatever tools they have at their disposal to improve the growth outlook and avoid being voted out of power. The prospects of continuing monetary stimulus and the potential for fiscal stimulus will provide some tailwind for risk assets in this increasingly uncertain and volatile environment.

The SA economic growth outlook remains anaemic and risks are certainly to the downside against the backdrop of a weaker global economy. The rating agencies have granted the country a reprieve from being downgraded to junk status, but this is likely to be temporary, unless we see real action to address financial conditions at state-owned enterprises before December.

Increased political uncertainty, low growth and high inflation will plague the local economy in the short term. In the context of weak local and global economic growth, our base case is that domestic interest rates are at, or very close to, a peak.

We have used the recent market correction to add to our local equity holdings, on the basis of their compelling longer-term valuations. We continue to favour the quality global businesses that happen to be domiciled here, such as Naspers, British American Tobacco, Steinhoff and Anheuser-Busch InBev. These companies have robust business models, are diversified across numerous geographies and currencies, and remain attractive based on our assessment of their intrinsic value.

Based on our assessment of fair value, resources are attractive enough to warrant a reasonable weighting in our equity and balanced portfolios. However, given that China remains an imponderable, this is not a portfolio-defining position. Our preferred holdings remain Anglo American, Mondi, Exxaro and the platinum producers. We continue to favour platinum over gold producers and our preference remains the low-cost platinum producers Impala Platinum and Northam.

We continue to hold reasonable positions in the food retailers and producers as well as selected consumer-facing businesses (chiefly Woolworths and Foschini). These businesses are exceptionally well managed and trade below our assessment of their fair value.

Banks returned -3.1% for the quarter, outperforming the broader financial index. Valuations are attractive on both a price-to-earnings and price-to-book basis. Our preferred holdings are Nedbank, Standard Bank and FirstRand. Life insurers returned -6.6% for the quarter. We prefer Old Mutual and MMI Holdings, both of which trade on attractive dividend yields and below our assessment of their intrinsic value.

In terms of asset allocation, equities remain our preferred asset class for producing inflation-beating returns. We prefer global to domestic equities on the basis of valuation and remain at the maximum 25% offshore limit in our global balanced funds.

Listed property returned -0.4% for the quarter. We expect domestic property holdings to deliver reasonable distribution growth over the medium term, which, combined with a fair initial yield, offers an attractive holding period return. We continue to hold the higher-quality property names which we believe will produce better returns than bonds and cash over the long term. Although the news of Brexit is clearly negative for our UK-based holdings in Intu and Capco in the short term, we believe the sell-off has more than priced in these risks, and both stocks now trade at large discounts to our assessment of their intrinsic value.

The bond market returned 4.4% for the quarter, outperforming cash, which yielded 1.8%. We believe yields on global bonds are too low and do not offer value. The outlook for local bonds is relatively well balanced and the asset class offers reasonable value relative to cash over the long term.

In an incredibly uncertain world, we continue to strive to build diversified portfolios that could absorb a dramatic change in the strong momentum seen in markets over the last few years. We will remain focused on long-term valuations and will seek to take advantage of whatever attractive opportunities the market presents us to generate long-term returns for our investors. 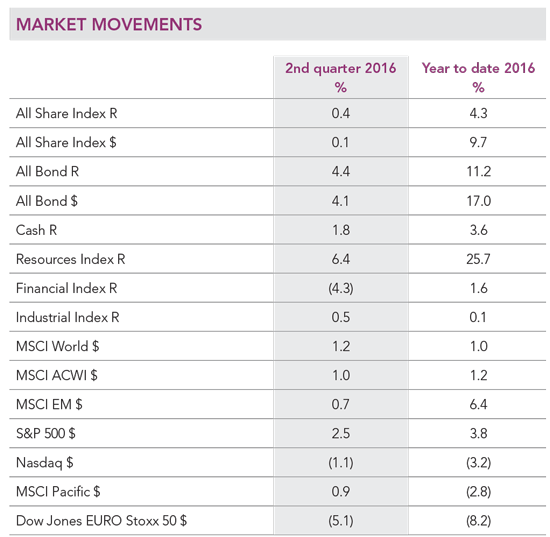