Since the start of the financial crisis in 2008, monetary policy has been the instrument of choice to deliver a wide range of economic outcomes: to help boost aggregate demand, to support growth by encouraging borrowing, to facilitate more sustainable fiscal positions and to help prevent deflation in many developed economies. The heavy reliance on monetary policy was at least in part because many governments, particularly in larger developed economies, were so desperately indebted at the start of the crisis that there was little scope for fiscal policy to intervene. Lower funding costs mean this is no longer the case.

Central banks had to do most of the policy heavy lifting during and in the aftermath of the financial crisis, and without active intervention and the willingness to adopt increasingly unconventional policies, the crisis would have been much, much worse. Developed economy central banks started by cutting reference rates to zero, and the US Federal Reserve (Fed) and European Central Bank (ECB) introduced ‘forward guidance’ in an attempt to influence market expectations of future interest rate moves. The guidance was that rates would be kept low for a long time. Central banks also launched a number of consecutive stimulus packages that involved buying massive quantities of government securities aimed at keeping yields low. These purchases were then extended to the credit market to help lower the cost of corporate borrowing. As conventional monetary policy became less effective at delivering sufficient growth and convincingly raising inflation, policymakers have opted for increasingly unconventional monetary policy settings. The ECB repo rate is at zero, while the Bank of Japan, the Swedish Riks-bank and the Swiss National Bank have all taken nominal policy rates below zero, and all have extended their asset purchase programmes during the course of the year. 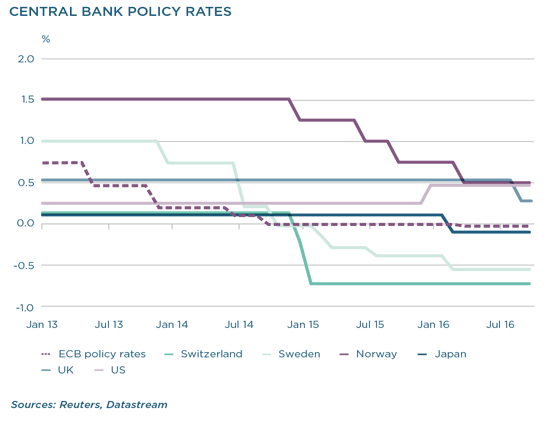 These policies have certainly helped to support growth, as well as avoid protracted deflation and boost asset prices, but two serious issues are emerging. The first is that there are unintended consequences to negative interest rates. These consequences may not only frustrate central bank efforts to achieve better growth, but will in fact damage the economy in the long run and become increasingly difficult to manage. Secondly, central banks are running out of assets to buy in order to sustain their various quantitative easing programmes. These problems are most evident in the collapse in bond yields in parts of Europe and Japan, and to a lesser degree, in the UK and US. When long-dated yields are negative, banks are unprofitable, making them even less able or willing to extend credit. More widely, low interest rates are adversely affecting the incomes of the world’s ageing populations, where spending power is concentrated, especially in the US, Europe and Japan. Perversely, savings rates are rising as people reassess their expected income growth and retirement needs. Also, companies are still not investing.

There does seem to be some recognition by these central banks of the risks of very low interest rates for prolonged periods of time. The Bank of Japan recently released the details of its review of monetary policy, and announced that it plans to target a 10-year bond yield of ‘about zero’, and that it plans to keep increasing its money base until inflation is sustainably above the 2% target. The Norwegian central bank has indicated that it will not cut policy rates again this year or next. Similarly, Sweden’s Riksbank has started to signal that it will not extend the current asset purchase programme. The ECB is unlikely to be as agile in changing its policy settings as these central banks, but it is approaching the limits of its asset purchase programme under current rules. In the US, the Fed is generally expected to raise the funds rate by a further 25 basis points by year-end. 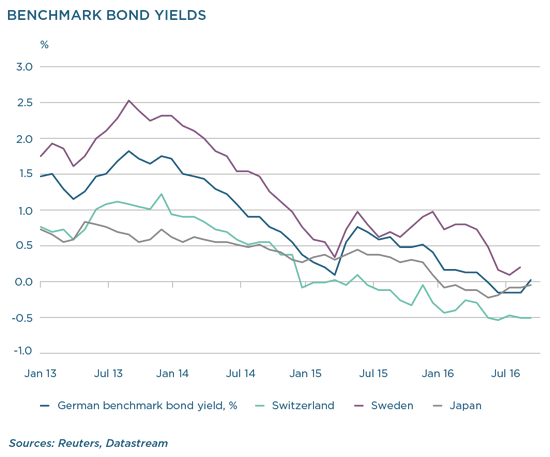 In this context, fiscal policy is increasingly being called upon to help stimulate growth. Many argue – convincingly – that state infrastructure in many developed economies could use upgrading, and historically low long-term bond yields will allow governments to fund more expansionary policies at cheap rates. Replacing crumbling public infrastructure should not only raise aggregate demand, it should also increase aggregate supply by supporting private sector productivity and efficiency.

The good news is that the calls for government infrastructure investment seem to be leading to action – at least in developed countries. Canada has announced a plan to boost public investment and the UK will no longer try to eliminate the fiscal deficit in the next four years, with prime minister Theresa May’s government designing a plan to improve economic conditions in cities across the country. In Europe, Germany is planning an increase in spending on infrastructure, and the Juncker Plan, if implemented, will see greater infrastructure investment across the eurozone. At this stage it seems that the US should also enjoy greater fiscal stimulus regardless of who wins the election, with both candidates favouring an increase in infrastructure investment. Less directly, Japan has further delayed an increase in consumption tax, favouring growth over fiscal consolidation. Taken together, this is unlikely to generate a big boost to GDP in the short term, but it seems a step in the right direction.