The Importance of Growth - October 2016

It really is all about growth. Growth reduces poverty, lowers unemployment, creates incomes and generates taxes. In turn, this adds to revenues and allows governments to implement policies that improve the standards of living. Sustained periods of growth reinforce this virtuous cycle − creating economic room for wider government services, education, investment, innovation and ultimately improvements in productivity.

Without growth, it is very difficult to achieve a sustained reduction in poverty. It also becomes unattractive for companies to invest or employ, and ultimately government coffers run dry. Without decent revenue income, governments are forced to raise debt in order to secure money to spend. The more debt governments raise, the more markets and investors demand to be paid for such funding.

Over time, the cost of borrowing tends to increase, further limiting government’s options. This is why growth is so important, and why it is a key concern for those ratings agencies with pending reassessments of SA’s sovereign rating. In economic terms, there are only three ways in which an economy can grow. It can:

It is perhaps easy to dismiss this ‘virtuous cycle’ as one that sounds nice in theory, but unlikely in reality. This is especially true in the current environment, where globally economies seem stuck in a low-growth and low-productivity rut, and both monetary and fiscal options seem limited. SA is facing the same challenge: growth has fallen to very low rates and potential (long-term) growth estimates have been steadily revised lower. This reflects diminished capacity within the economy to generate healthy, sustained growth at this stage, and through the deterioration, government has had to rely more heavily on raising debt to fund spending.

What is perhaps harder to remember is the fact that SA has seen periods where sustained growth did lift a significant number of people out of extreme poverty, where unemployment fell and investment picked up, and government was able to implement social policies that improved standards of living. Importantly, SA was able to reduce the proportion of people living in extreme poverty during this period, and still managed to improve the fiscal position. The World Bank defines ‘extreme poverty’ as those living on less than $1.25 per day. At the time of writing, that would have amounted to about R17.50 − a little more than the cost of one night’s sleep in a homeless shelter in Cape Town. In 1993, the World Bank measured SA’s ‘extreme poverty’ headcount at 32% of the population. By 2011, this figure halved to 16.6%. If we use a slightly wider World Bank measure, the proportion of people living on less than $3.10 per day in 1993 equalled 49.2%, and reduced to 34.7% by 2011. 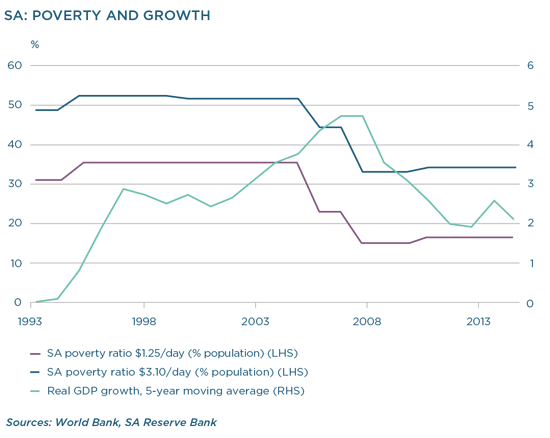 This is no mean feat when considering the economic adjustment that took place in SA over this period. In 1994 the ANC government inherited an economy that was basically bust. There was no real growth, and the fiscus was in a terrible state. Government debt totalled 42% of GDP in 1993 (and would accelerate to 49% by 1995), and the deficit plummeted to -6.9% of GDP.

Between 1994 and 2000, government began to implement policies to stabilise the economy. It adopted a fiscal framework that was initially guided by the Reconstruction and Development Programme (RDP) and then, from 1996, by the Growth, Employment and Redistribution strategy (GEAR). The adoption of GEAR, in part, recognised that economic growth was too slow for government to implement the social objectives of the RDP. This meant that between 2001 and 2006, fiscal policy became visibly more expansionary. Expenditure increased from 19.7% of GDP to 23.1%, representing real growth of 8% on average over the period. During this time, revenue increased to more than 26% of GDP, buoyed by stronger nominal growth, a widening of the tax base and commodity price windfalls. Alongside steady fiscal consolidation, government started to build a social security safety net, which included a system of conditional and unconditional grants. The net effect was an increase in noninterest spending, but smaller deficits (as is clear from the graph). 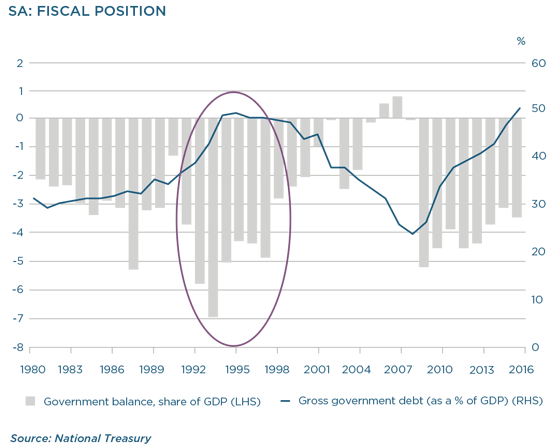 Ratings agencies recognised the strong commitment to, and delivery of, more sustainable fiscal policy (and the decent growth that ensued), and awarded SA with investment-grade ratings – upgraded steadily from 2001 to 2009.

In some ways we are faced today with similar challenges to those prevailing in 1994: the economy is likely to grow by only 0.3% this year and by about 1% in 2017. The mediumterm budget policy statement should deliver a deficit forecast a little weaker than the -3.2% targeted in the February Budget, as the quality of revenue is weaker than expected and is a risk to the targeted fiscal deficit for the current fiscal year. Expenditure is also running a little ahead of budget, although early election-related spending may reverse and some evidence that government is managing to lower its wage costs could provide some relief. In the past, government has demonstrated its ability to hold fast to an expenditure cap, and will have to keep a firm grip on its expenditure targets to deliver a sustainable improvement in the fiscal balance. 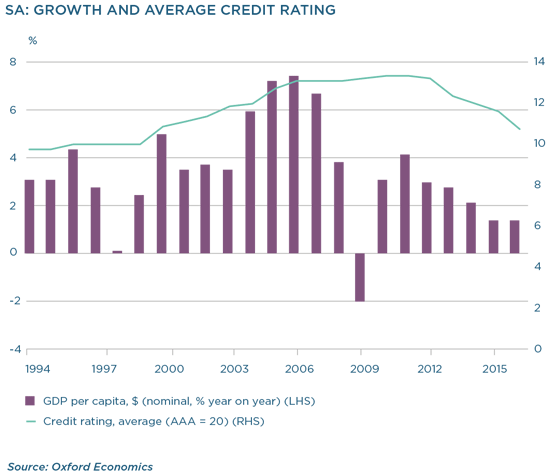 Gross loan debt has risen quite sharply from a low of 26% of GDP at the peak of the previous cycle in the first quarter of 2009, to 50.5% at the end of the 2015/2016 fiscal year. This is above the pre-democracy levels. Low interest rates have kept the cost of servicing debt reasonably contained, but certainly this is a risk going forward.

A rise in debt service costs will leave even less room for spending on social protection or investment. Overall, the fiscal position is constrained and National Treasury has a formidable task in coordinating ongoing consolidation. And instead of working towards achieving ever better investmentgrade ratings, as was the case through the last decade, SA is trying to avoid a downgrade to junk status.

Looking ahead, there are reasons to be more optimistic as well as significant lingering concerns. On the positive side, some growth data look a little better: the second-quarter GDP rebound to 3.3% quarter-on-quarter (seasonally adjusted and annualised) is unlikely to be sustained, but better-than-expected trade data are driving net export growth, and the current account is at the margin less of a funding concern. In time, households should benefit from falling (food) inflation following the sharp rise in 2016. Even if the job market fails to recover, real household incomes should have some reprieve, and falling food inflation tends to alleviate more strain on low-income households. We expect the central bank to keep interest rates on hold at 7% for some time, but if inflation is well below the current SA Reserve Bank forecast for 2017 of around 5.7% on average, there should be room to cut rates late next year. Growth in 2017 should be closer to 1% in real terms, and possibly a little higher. 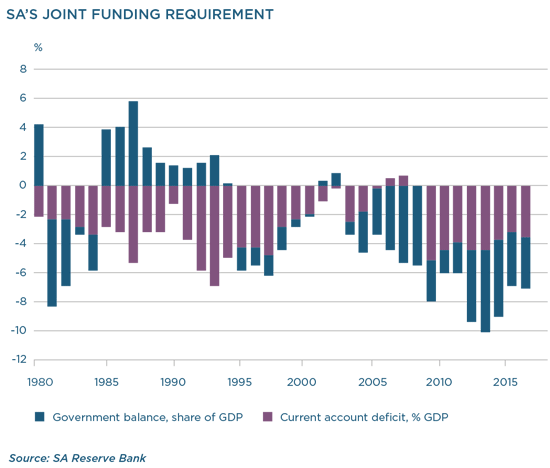 The political environment remains fluid, and uncertainty is no friend of growth. Consumer and business confidence is constrained. These are key ingredients of future growth dynamics – companies in particular may be able to spend on investment, but if they are unwilling to do so, growth will remain weak, and options limited. While ratings agencies may remain forgiving of weak (but improving) growth, their assessment of government’s willingness and ability to meet its debt obligations has become more uncertain with the pressure on state institutions, which has increased since the end of 2015. An end to this uncertainty would greatly improve SA’s growth prospects.