While politics continue to play in the background (and flare- ups have been frequent), the start of 2017 has confirmed that global growth momentum continues to build. GDP growth forecasts for the year have been revised up, as data out of Europe and parts of the emerging markets complex have surprised to the upside. Bottom-up forecasts suggest that global GDP growth should be about 3% for this year, with the real surprises being strong growth momentum in Europe, ongoing resilience in the US and a very strong turnout for Chinese growth at the start of the year.

The economic recovery looks broad based at this stage, and well supported by a powerful recovery in manufacturing activity against the backdrop of a strong uptick in business and household confidence. Inflation has also re-emerged and, with the resurgence in economic activity, has re-opened the debate about monetary policy settings in developed economies. The recovery in nominal GDP globally has also been good for corporate profitability, which has shown signs of improvement after two years of weakness. If sustained, this should support both investment and hiring. 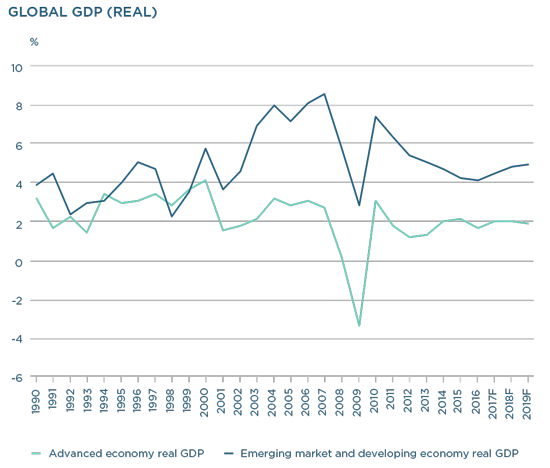 The outlook for global growth from here is hard to assess. The interplay between long-term trends (such as ageing populations and moderating productivity), accelerating growth that is still supported by extremely accommodative policy settings (which are arguably now no longer as necessary) and both political and economic shocks makes the narrative very hard to align.

Following elevated expectations that president Trump would deliver early fiscal stimulus, slow administrative processes have led most forecasters to push expectations out. Data also show that the first quarter of 2017 got off to a soft start, with warm weather, inventories and net exports a spill-over drag from the end of 2016. However, incoming data point to a healthier, more enduring mix of rising business confidence and an acceleration in capital expenditure.

Strong payrolls growth early in the year should also support household spending. Overall US growth is forecast at about 2% (slightly ahead of potential) in 2017, with anticipated fiscal stimulus expected to be an accelerant into 2018. 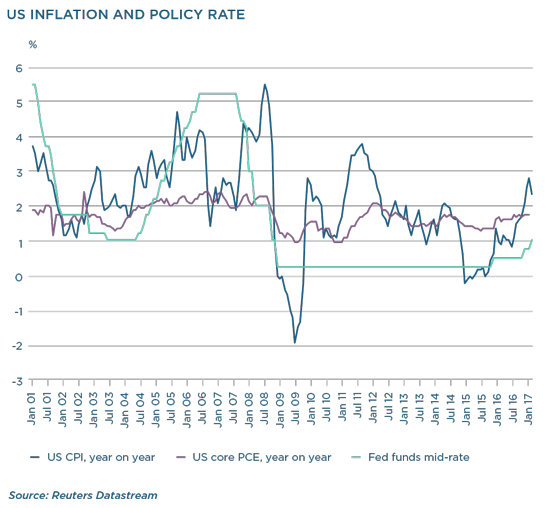 The annual growth rate of the core PCE deflator, the US Federal Reserve’s preferred inflation metric, has risen from a recent trough of 1.3% year on year (July 2015) to 1.8% in February. CPI data were stronger than anticipated too, up 2.4% year on year from 2.8%. Reflecting a more buoyant economic environment, the Federal Open Market Committee voted to raise the federal funds rate a further 25 basis points (bps) to 1.0% in March, and indicated the central forecast among members for a further two 25 bps rate hikes this year as most likely.

The outlook for the US is not without its challenges. President Trump met heavy opposition when trying to repeal the Obamacare health bill, and failure to do so has jeopardised his tax plans. In the meantime, the US has reached its debt ceiling, and while fancy footwork can avoid a government shutdown until there is a vote to extend the funding limitations, the window to do so will narrow into the summer. The tense rhetoric between the US and both Russia and North Korea has the potential to flare and is likely to be an ongoing source of uncertainty.

In Europe, politics remain in focus. With the French elections underway, National Front candidate Marine le Pen continues to do well in the polls, while both independent contender Emmanuel Macron and François Fillon recovered some early slippage heading into the election. Interestingly, the leftist candidate, Jean-Luc Mélenchon, saw some late popularity before voting commenced, making the election another one that was simply too close to call at the time of writing. This is arguably the most important election in Europe this year. Here, the outcome could have a binary impact on France’s economy – Le Pen may create a vacuum in which France becomes uninvestible for a time. Both Macron and Fillon have reformist agendas (which could see significant changes to economic policy) while Mélenchon supports expanded welfare programmes and increased labour rights, and has called for wealth redistribution to rectify inequalities.

Elsewhere, elections in the Netherlands saw right-wing candidate Geert Wilders defeated and a more moderate centrist coalition government negotiated. Greece has also re-entered the spotlight as concerns about ongoing bailout funding re-emerged in February. The conclusion of the second bailout programme review still does not seem imminent and Greece owes debt repayments of approximately €1.5 billion by the end of April – before a staggering €7 billion is due to be repaid in July.

On the European data front, December and January’s strong momentum continued through March: Eurostat’s flash estimate for eurozone GDP came out stronger than expected for the last quarter of 2016, at 0.5% quarter on quarter and 1.8% year on year, with an upward revision in the third quarter of 2016 to 0.4%. This brought GDP growth of 1.7% in 2016, slightly ahead of the 1.6% consensus. Since then, confidence readings have become elevated, suggesting some durability to the upswing. Inflation prints in Europe rose early, but then slipped again in March to just 1.5% year on year. The European Central Bank (ECB) will be watching closely to see if the moderation in March is sustained. German inflation remains a key indicator of pricing pressure, and with a tight labour market, wages are being closely monitored. German consumer inflation accelerated to 1.6% year on year in March. 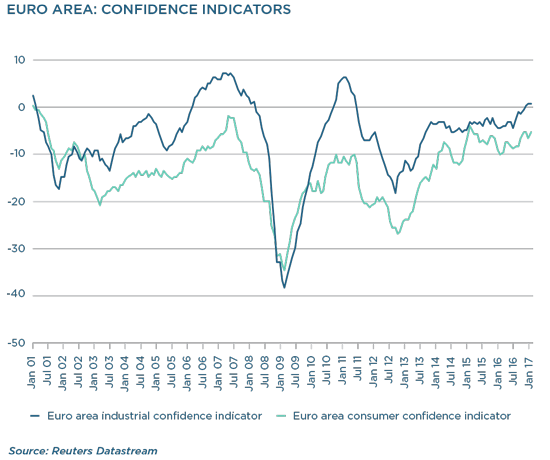 Rising inflation has raised speculation that the ECB might raise rates before it concludes its asset purchase programme. However, ECB governor Mario Draghi appears to have indicated that the ECB will not change policy rates until the current round of quantitative easing runs out at the end of 2018. Given the strength of the eurozone recovery, it seems more likely that the process of tapering ECB asset purchases might slow during the course of next year.

In the UK, prime minister Theresa May has announced early elections, scheduled for 8 June. With the Labour Party very weak, the election should allow May to secure another term, and progress with Brexit negotiations as the election calendar in Europe tapers in the second half of the year. Having formally notified the EU of the UK’s intention to leave the union, the complicated and uncertain negotiation process is set to start. At this stage, European counterparties seem adamant that they will not allow the UK to negotiate its withdrawal in parallel to the necessary new trade and business agreements with member countries, but delays could negatively impact confidence and growth in the UK. Most of the negotiations will take a backseat while the European election calendar runs this year, which will put pressure on those involved to meet the two-year deadline in early 2019. Policy settings in the UK are likely to be put on hold. Inflation data showed CPI rising to 1.8% year on year in February. While this slightly undershot expectations, Producer Price Index input prices continued to rise, now recording 20.5% year on year. In contrast to rising inflation, average weekly wages decelerated from 2.8% to 2.6%. UK retail sales also surprised to the downside.

Strong growth in China in the second half of 2016 provided significant support for commodity prices globally, and the gains seem to be relatively broad based. 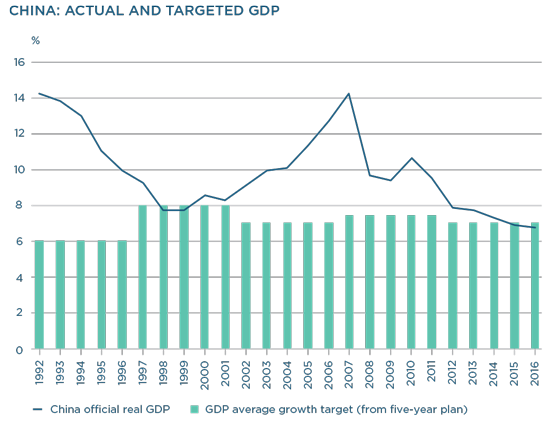 Official growth statistics for the first quarter of 2017 show that the Chinese economy grew by 6.9% year on year – ahead of the official target of 6.5%. This resulted largely from good infrastructure growth and strong property sales. Consumption remains resilient, in turn supported by solid nominal wage growth. Overall, however, ongoing excessive growth in debt, mostly via the nontraditional banking sector, remains the overriding concern for the Chinese economy. For now, the risk of a sudden stop seems a little while away, as momentum – and policy – support growth within a range of the government’s 6.5% target.

The brighter picture for global growth will go some way to ease the millstone of high debt, and will perhaps also slightly delay the need for desperate structural reform in many developed economies. But the cyclical upswing is unlikely to be of su¿cient duration or momentum to provide a growth groundswell that facilitates more sustainable fiscal positions. In addition, growth does not come without its challenges. The processes by which developed economy central banks start to normalise policy settings may be disruptive and will undoubtedly have consequences for the heavily indebted governments that have benefited enormously from abnormally low global interest rates. As is almost always the case – although seldom in as fluid and uncertain an environment as the world is now – politics is more likely than not to complicate, compromise and cripple the process.