In January, I wrote about how a little good news could go a long way to making this year feel quite a lot better than last year. For the first time in a long time, forecasters were revising growth numbers up, not down, and inflation down, not up.

The constraints of 2016 – the drought, skyrocketing inflation, rising interest rates, slowing growth and the ongoing threat of ratings action – were all set to ease. Good rains had produced a large maize crop, and food inflation was slowing already. The SA Reserve Bank’s (SARB) monetary policy committee (MPC) signalled that it ‘may’ be at the end of the hiking cycle, an improvement in terms of trade helped stabilise the exchange rate and brought the trade balance into surplus. The Budget tabled by former minister of finance Pravin Gordhan was credible, consistent and committed. Better growth and fiscal discipline raised the possibility that negative ratings actions might just be delayed.

And then the president sent that SMS on 27 March.

This is where the good news starts to fade.

The message calling Gordhan home from his offshore roadshow came at a time when the economy was just showing statistical evidence that it was turning the corner. Following the subsequent events – the cabinet reshuffle of key ministerial positions, most notably the replacement of the finance minister and his deputy, followed by the resignation of the Treasury’s director-general; the foreign currency ratings downgrade below investment grade, first by S&P and then by Fitch, which downgraded both local and foreign currency ratings; and the currency weakness, equity losses and significantly higher bond yields – the outlook for the economy has clearly changed.

The first evidence was the MPC’s communiqué at the end of March. The statement concluded that the SARB ‘may’ be at the end of the hiking cycle. Without the political uncertainty at the time, the wording of this would have been more dovish, and probably would have opened the door for easing later in the year. This now seems unlikely. While low growth and moderating inflation may have allowed for a shallow easing cycle into early 2018, the SARB is more likely to hold steady and weather the political volatility.

Hard-won fiscal gains are also at risk. After implementing counter-cyclical fiscal policy in the wake of the global financial crisis in 2009, the failure to moderate spending has led to a meaningful deterioration in SA’s fiscal position. The deficit has been stuck at around 3.5% to 4% of GDP since 2009, resulting in ballooning debt: from a nadir below 30% of GDP in 2007 to over 50% at the end of 2016. In his second term as finance minister, Gordhan worked hard to maintain a ceiling on spending, and in his past two budgets, he raised revenue through a variety of tax adjustments. His efforts were aimed at regaining some of the lost ‘fiscal space’ by driving down the pace of debt accumulation, and ultimately lowering the stock of debt relative to GDP. A loss of the current fiscal discipline is likely to see debt continue to accumulate, probably at a faster pace. Rising debt initially limits government’s ability to invest in ‘good’ capacity spending, and ultimately risks that it can no longer meet its financing obligations. 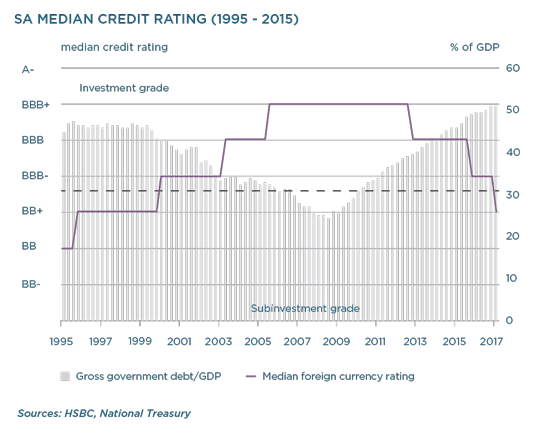 Gordhan’s fierce commitment to rooting out corruption and improving governance at state-owned enterprises (SOEs), which continue to cost the state enormous sums through mismanagement, has also been undermined. Already SAA has announced that its realised loss in 2016 was R3.5 billion – double the original estimate. State-owned broadcaster SABC has also reported persistent losses, the last estimate being R400 million. These losses now represent direct capital claims on government, and together with Eskom, Transnet, the SA National Roads Agency (Sanral) and the Road Accident Fund have added to considerable contingent liabilities to the state. Government has extended guarantees totalling R480 billion in the last fiscal year; if utilised, this is currently about 10% of GDP.

Also, the ratings downgrades are not likely to happen in isolation. Moody’s Investor Services has SA on notice for a downgrade too, and will make an announcement soon. Ratings are important – they imply a higher cost of funding for government and corporate debt as the issuers’ risk assessment deteriorates. Ratings can have a material, direct impact on capital flows as sentiment deteriorates, and if the ratings action affects the country’s inclusion in investor benchmark indices such as Citi’s World Government Bond Index. At this stage, exclusion is not imminent, but it is certainly a lot closer than it was. Government is likely to pay more for its debt, and even before these developments, interest service on the rising stock of government debt is the fastest growing expenditure item in the Budget.

RISK FIRMLY TO THE DOWNSIDE

Despite this, there is still sufficient momentum to suggest this year will, indeed, produce better growth than last year. GDP statistics published for 2016 show that for the year as a whole, the economy grew just 0.3%, from 1.3% in 2015. The latest data, for the fourth quarter of 2016, revealed growth contracted by 0.3% from the previous quarter (after seasonal adjustment), from just 0.4% in the third quarter, but that it gained 0.3% from the same quarter in 2015. The weakness was concentrated in a drawdown of inventories, but household consumption was pretty resilient, at 2.2% year on year, supported by ongoing gains in compensation. Unsurprisingly, capital formation remained weak, but at 1.7% year on year, was less weak than in previous quarters. Much of the improvement came from the broader public sector – the private sector continues to underinvest. The trade balance registered a surplus, and the current account deficit narrowed meaningfully in 2016 to 3.3% of GDP (in the fourth quarter, it reached -1.7%), from -4.3% the year before. 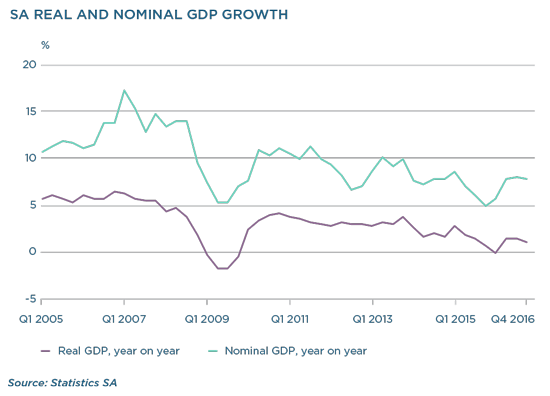 High-frequency data released by March built on small improvements in growth momentum seen in January and February. The Barclays Purchasing Managers' Index remained elevated at 52.2, from 52.5 and 50.9 in the previous two months. This is a signal of stronger manufacturing output in coming months. New passenger car sales were up 2.1% year on year off a weak base, but on balance the quarter is sequentially the strongest in two years. The crop estimates committee forecasted that SA’s total maize harvest could almost double last year’s production (14.3 million tonnes, compared to 7.8 million tonnes in 2015/2016). This should give a meaningful boost to growth from agriculture, and will also help lower prices of cereals and feed, curbing food inflation. 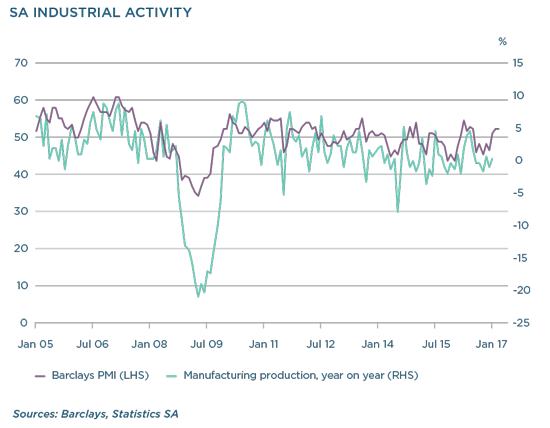 While tax increases announced in the Budget will offset some of the positive impact of lower inflation on household spending, cooling prices should help raise the real incomes of households, especially the poor. CPI inflation, which reached 6.7% year on year in December, moderated to 6.3% by February despite some hefty increases in retail fuel prices earlier this year.

Relative to a year ago, food inflation has been sticky, and remains high at 10% year on year. But this is already off the peak of 12% reached in October last year, and the high base, coupled with the improved outlook for maize prices (as a cereal, and as feed), and should also contribute to easing retail prices. The lagging impact of relative strength in the exchange rate following the sell-off in December 2015 (before the most recent decline) should remain a positive support for lower inflation in coming months. 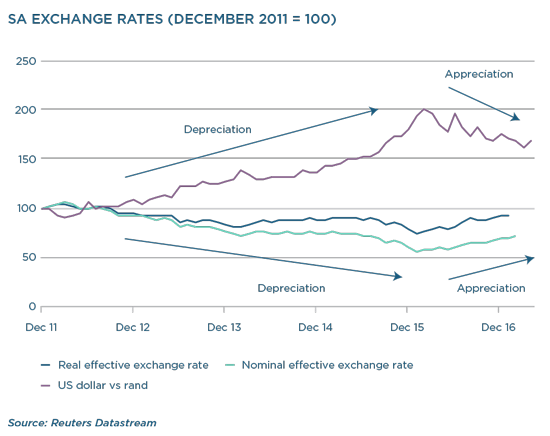 At this stage, we do not think the MPC will cut interest rates amid high political uncertainty and persistent risks to the currency. That said, if inflation falls meaningfully and the outlook for 2018 improves from the SARB’s 5.4% forecast, and growth fears are realised, it is not inconceivable that rates could fall modestly.

The impact of the political changes of the past weeks may only really transpire in many years to come as the slow bleeding of resources and loss of skills and investment feed through. Then again, the fallout may also hit quickly, as fiscal losses at SOEs, government departments and state-owned corporation bubble to the surface, revealing the extent of mismanagement, corruption and degradation that took root years ago, but now emerge as the structures holding it all together collapse. It is possible too that a new narrative emerges from within the ruling party which recommits itself to sustainable, responsible economic policies.

Growth remains the single most important ingredient in fiscal sustainability, in poverty eradication, and in generating and supporting institutions which protect the vulnerable. For an economy to grow, it needs to create jobs, investment in capacity and improved productivity. Job creation and investment only happen when households and businesses are confident in the prospects of the economy. This is not just about big companies, which in the case of SA have been offshoring operations for years, but the mom-and-pop outfits that provide small services or speciality manufacturing. It's about the young people who start businesses with friends and invest in their communities. When these are supported, then the additional funding, especially the foreign funding which fills the gap between what South Africa saves and what it consumes (the current account), can come. Without it, everything is much, much harder.