Coronation Global Emerging Markets Equity provides access to the best investment opportunities in global emerging markets. It aims to deliver capital growth through a focused equity portfolio, comprising securities of companies based in emerging markets or which derive a significant portion of their business from emerging economies. The objective is to outperform the MSCI Emerging Markets Index over five years and longer periods.

THE YEAR IN REVIEW

Coronation Global Emerging Markets Equity returned 15.1% in 2016, which was 3.9% ahead of the index’s return of 11.2%. Over the past year, seven stocks made a positive contribution to performance of more than 1%, of which four were Brazilian. These companies (Kroton, Estácio, Itaúsa and BB Seguridade) appreciated by more than 50% in US dollars in 2016. Kroton, the education company, was the standout performer, appreciating by 74% in US dollars and contributing 2.7% to outperformance.

We would make the point, as we always do, that not too much should be read into performance over short time periods of one or two years. Given our long-term focus, and the fact that we therefore frequently own stocks that are disliked by the market because of their poor short-term outlook (Brazilian stocks being the most recent case in point), it is often necessary to go through periods of shortterm underperformance in order to achieve the objective of long-term outperformance of the market. In our view, only periods of five years or longer are meaningful, and ideally, if possible, performance should be assessed on this basis. In this regard, since the strategy launched eight-and-a-half years ago, it has outperformed the market by 4.9% per annum and over the past five years it has beaten the market by 3.8% per annum.

In terms of portfolio activity in the final quarter of the year, we reduced the size of our holdings in the Indian IT services companies through reducing both the Cognizant and the Tata Consultancy positions and selling out of our smallest position, HCL. As a result, exposure to the Indian IT service companies moved from 4.3% of strategy at the end of September to 1.5% in total at the end of December. In turn, the Indian exposure reduced from 12.1% of strategy to 9.1%. We still believe that the Indian IT service companies have attractive long-term prospects; however, the potential risks facing these businesses have increased (insourcing, automation, a Trump administration clampdown on visas, etc.) and, as a result, these stocks are somewhat less attractive on a risk-adjusted return basis, in our view.

In terms of buying activity, we continued to add to Yum! Brands (owner of KFC, Pizza Hut and Taco Bell globally) and also added to Yum China after it was spun out of Yum! Brands. Following the split, the original Yum! Brands now consists of all operations globally (excluding China) and over 40% of earnings come from emerging markets: 20% alone comes from the royalty fee from the Chinese business. 100% of Yum China’s earnings come from the 7 300 units in China.

Yum! Brands owns three of the best global fast food brands, has defensive and stable earnings, generates large amounts of free cash flow and has very high returns on capital. This is particularly the case for the original Yum! Brands, where 93% of units are franchised (compared with the Chinese business, where 80% of stores are company owned), resulting in even higher returns on capital (>100%) and free cash flow generation relative to earnings. The original Yum! Brands continues to refranchise units, with a target of being 98% refranchised by 2018. This will raise the firm’s return on capital and lift its conversion of earnings into free cash flow even higher. In the case of Yum China we believe that there are still many years of growth left in China (due to low penetration of units and a fragmented quick-quickservice restaurant market) and, in addition, profitability is currently below normal, in our view. We think both stocks are attractive and together these two positions now make up 4% of strategy.

We also bought new positions in Nike and Sberbank, both of which have been holdings in the past. In our view, Nike is among the best businesses in the world. Its brand is iconic, it is the global leader in a structurally growing market and has high exposure to emerging markets (42% of profits), generates returns on equity of 30% and converts around 90% of its earnings into free cash flow. Going forward, we believe the company can continue to grow its top line in the high single digits and that it can also expand margins through continued purchasing and manufacturing efficiencies, as well as due to an increase in the contribution of the higher margin retail and e-commerce divisions. Recently, the Nike share price has been under pressure due to slower short-term earnings growth, partly due to decent performance from rivals such as Adidas and Under Armour, and we used this opportunity to build a position.

Sberbank is the dominant bank in Russia (attracting 46% of retail deposits in Russia, 38% of credit card balances, 40% of retail loans and 32% of corporate loans), and is arguably the most dominant domestic bank in the world. The poor economic conditions in Russia over the past few years have in fact made Sberbank even stronger, as many competitors have come under pressure.

The key negative is that the bank is state-owned. However, over the past five years its CEO Herman Gref has managed to steer the bank away from state-pressured uneconomic lending, and introduced significant change (including new risk management systems, the closure of branches and reduction in headcount, and various digital initiatives). Today, Sberbank trades on around 6.5 times 2017 earnings, 1.1 times price to book and a 3% dividend yield, which we find attractive for such a dominant bank that is on track to generate return on equity of close to 20% in the years ahead.

Finally, on the buying side, we bought a new position in the pan-Asian long-term insurer AIA Group (AIA). A former unit of AIG, AIA has operations in 18 countries throughout Asia, with the key markets being Hong Kong, China, Singapore, Thailand, Malaysia, Indonesia, India and the Philippines. Insurance penetration in these countries is still low and the middle class in these regions is growing rapidly, with Asia having the fastest growing middle class in the world.

AIA has a strong brand in the region, excellent distribution through a massive on-the-ground sales force of 250 000 agents, and a no. 1 or no. 2 market position in the key markets of Thailand, Malaysia, Singapore, Indonesia and the Philippines. Market shares in China and India are still low (1% in both cases), but this represents a big opportunity over the next decade. Even though AIA’s market share in China is only 1% (AIA only has five branches in mainland China), the country already contributes 20% of the group’s value of new business (VONB). 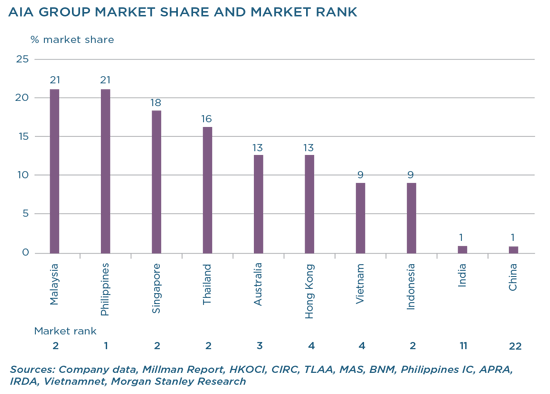 An additional competitive advantage sits in AIA Vitality, a strategic joint venture with the SA insurer Discovery (also a portfolio holding) that utilises Discovery’s proprietary wellness-based life insurance model to improve the health of customers and, in doing so, lower premiums. Discovery introduced Vitality into the SA market two decades ago. The product has been incredibly successful and AIA Vitality naturally benefits from the experience and expertise that Discovery has built up over the past 20 years. 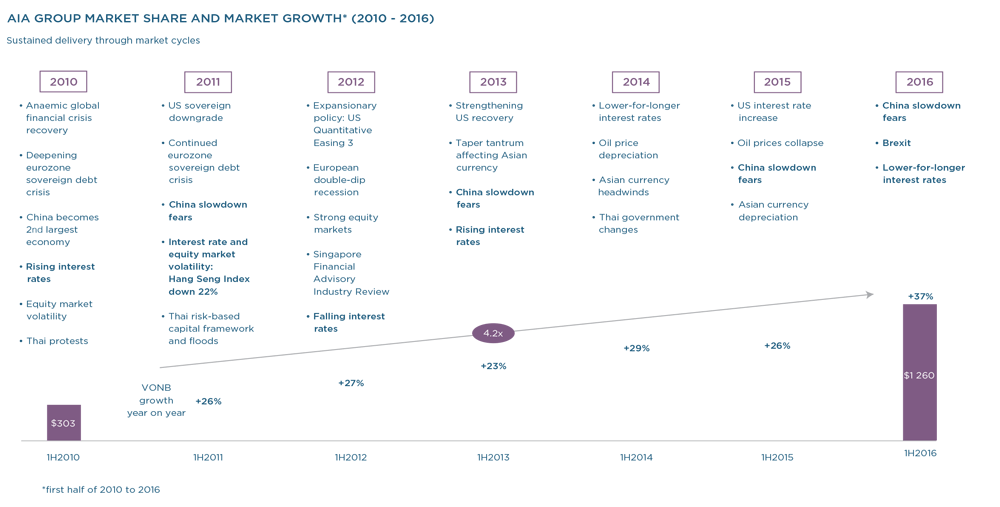 Under the leadership of the CEO Mark Tucker, AIA has delivered exceptional growth over the past five years, with VONB growth consistently over 25% per annum. Going forward, given the size of the potential market and AIA’s strong position, we believe the company can grow VONB by 15%+ per annum, as well as generate a 15% return on embedded value. The decline in the share price towards the end of the year (partly driven by concerns of restrictions on Chinese residents buying insurance products in Hong Kong) enabled us to buy AIA on around 15 times 2017 earnings, a 1.7 price to embedded value and a 2% dividend yield, which we believe is attractive for a company of this quality.

The weighted average upside to the portfolio at the end of December was just below 60%, which is well in excess of the long-term average of 50%. We continue to come across a number of potential new buys and the bigger challenge is deciding which positions to reduce or sell to make room for these potential new holdings. During the first quarter of 2017, members of the investment team will be going to India, and have scheduled two separate research trips to Brazil.