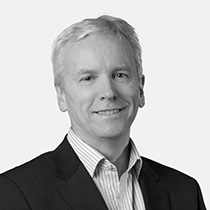 While the US dollar rose sharply in 2016 against currencies such as the British pound and Mexican peso, the tradeweighted US Dollar Index rose by only 3.6% in 2016. Over the year, the US dollar rose by 6.9% against the Chinese yuan and 3.3% against the euro, but was down 2.7% against the yen. Meanwhile, commodity-sensitive currencies that were deeply oversold in 2015 – such as the Russian rouble and Brazilian real – rebounded strongly in 2016, exaggerating the liquidity-sensitive rebound in their equity markets. Simultaneously, the apparent resilience of the US economic recovery fed a widening divergence among major market bond yields: ten-year yields rose in the US and Canada, while yields fell for the year in the UK, Japan and the eurozone.

Emerging equity markets, most of which fell sharply in 2015, began to turn around in 2016 – led by strong rebounds in commodity-sensitive markets such as Brazil, Russia, Chile, Argentina and SA. Mexico failed to benefit from this reversal due to a sharp drop in the peso/dollar exchange rate. Meanwhile, Shanghai China A-shares, which rose strongly in 2015, fell sharply in 2016. Taking a mediumterm perspective, over recent years both developed and emerging markets have been responding to the long-term effects of the global financial crisis, and their cycles have moved in different directions. The recovery of developed economies has been hampered by slow balance sheet repair (especially among banks) and the side-effects of quantitative easing (QE). This has resulted in lacklustre growth, persisting unemployment, low wage growth and discontented voters. By comparison, emerging economies implemented strong stimulus programmes between 2008 and 2010. These proved so effective that certain economies – including China, Brazil and Russia – had to change course in 2011 and 2012. As a result, they too experienced economic downturns and currency weakness in the years that followed. As we enter 2017, much will depend on how these issues are managed.

It seems that the defining feature of Trump’s economic approach – as proposed by his advisers – is likely to be a rebalancing of the policy mix. This will see the US move away from an exclusive reliance on easy monetary policy to jump-start the US economy towards a more balanced reliance on the deregulation of economic activity and on expansionary fiscal policy. Trump believes that this will significantly buoy the performance of the US economy. In fact, we cannot rule out the possibility of real US GDP growth doubling in the next couple of years, which will also drive up equity valuations and underpin dollar strength. Certainly, investment markets are buying into these promises.

In Europe, the outlook is less promising. In particular, the weakness of the European Central Bank’s QE programme and its decision to lower one of its key policy rates into negative territory have proved to be significant stumbling blocks to economic recovery. Unemployment remains high across the continent, while income growth is weak. Consequently, we have seen the emergence of fervent populism and nativism, with both far-right and far-left political movements growing. With upcoming elections in the Netherlands, France and Germany this year, there is the risk of further disruptive political outcomes.

Within emerging markets, China remains the largest – and the largest global buyer of commodities. Having embarked on a new round of credit expansion from the start of 2014, the Chinese economy could see yet another period of inflation. This could threaten the country’s sought-after shift to more consumption-led growth, and would also hold significant repercussions for other emerging markets, especially the commodity producers and China’s neighbouring economies. To date, excess credit growth has been largely confined to the Chinese financial and government sectors, but there are concerning indications that the broader economy may soon be impacted. This includes a series of mini-bubbles in equities, the housing market and then commodities. In addition, producer prices have started to rise for the first time in four years. The country will need to address these issues decisively to minimise the impact on its economy, but how it will go about doing so remains to be seen.

As we have highlighted before, far lower emphasis has been placed on valuation in the recent years of below-trend economic growth. Rather, stocks with low levels of volatility gained favour, outperforming more cyclical counters. Often, this was due to their bond-like qualities rather than their fundamental attributes – and it made these stocks expensive. Such valuations are likely to prove unsustainable, and are already starting to reverse. Furthermore, anticipated fiscal stimulus in the US under the Trump administration will support those parts of the market that have lagged ‘safe haven’ assets. In particular, the banks should continue to perform well. Being better capitalised now than they were in the wake of the financial crisis, these entities have also generally reduced the volatility of their earnings streams (despite operating under heightened regulation and in an environment of exceptionally low interest rates).

The sharp drop in commodity prices from mid-2014 into early 2016 weighed heavily on global equity indices, capital investment, and the economies and currencies of commodity-sensitive countries. Due to the lag between investment and production for most nonagricultural commodities, it takes time for lower prices to reduce supply, or for a price rebound to increase production. Energy inventories remain high, and the scope of pledged 2017 oil production cutbacks remains uncertain. However, the supply headwinds created by the sharp drop in energy sector capital investment from 2014 through 2016 will more than offset the near-term impact of a modest 2017 rebound in drilling and spending. It is the increasing recognition of this reality that fuelled the sharp year-on-year rise in oil and natural gas prices in 2016, and modest rebounds in other raw materials (where prices had fallen below the cost of production by early 2016).

The outlook has also improved for emerging markets, but in the near term it is likely that there will be further capital outflows due to a stronger dollar and rising interest rate risk, imposing financial stress.