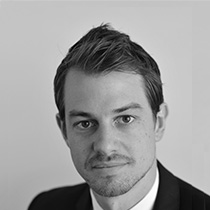 Guest author, Simon is the senior political economist and head of the African political economy unit at Standard Bank. He is a regular presenter on political and economic issues relating to SA and Africa on a variety of local and international platforms.

From an SA political perspective, 2016 was a bruising year. The year’s extraordinary volatility was largely determined by the seismic changes brought about by a dominant ruling party losing its once casual hegemony on the popular vote; a president scrambling for reascendancy after an epochal political miscalculation, and in doing so fanning wider internal discord in the party he leads; and a body politic, best represented by a restive student population, growing increasingly frustrated by the stubbornly torpid pace of economic growth and transformation.

Various themes can be hauled from the debris of last year’s political cycle, all of which will – in some form – carry through into the new year, and will shape the country’s longer-term political and economic direction.

The first is undeniably the manner in which president Jacob Zuma’s political authority has been so profoundly – and quite likely irreversibly – eroded. The turning point in this regard was undoubtedly the president’s dismissal of former finance minister Nhlanhla Nene on ‘9/12’ 2015, a moment that proved to be catalytic in mobilising those within the mechanics of the ANC and state, and from business and civil society, who had grown increasingly uneasy with the president’s stewardship of the economy. Still buffeted by the manner in which he was forced to re-appoint Pravin Gordhan as finance minister, the president then faced a damning Constitutional Court judgement against him, compelling him, as the opposition EFF had demanded, to ‘pay back the money’ unduly spent by the state on his personal Nkandla home. He also encountered rising allegations of state capture against him and the Gupta family, articulated in a public protector investigation later in the year, as well as elevated internal criticism following the ANC’s poor performance in the August municipal elections. In the final ANC National Executive Committee (NEC) meeting for the year, several senior party leaders rose to initiate a discussion on the removal of Zuma from the state presidency – a motion he survived largely as a result of crippling internal discord in the party and the related inability to find the consensus it demands to move forward on such matters, rather than due to the once-formidable grip he held on the party’s leadership cluster.

The scale of Zuma’s loss of place is perhaps best emphasised by his inability to orchestrate a reshuffle of his cabinet in 2016 – particularly given how many of the ministers serving at his behest are now openly defiant of his directives.

2017 will be the final year of Zuma’s functional political power. It will culminate in the ANC electing a new party president; surrounded by a reshaped ‘top six’ and an NEC which better represents the ANC’s current dynamic. It is already instructive that the ANC’s factional battles are now being openly fought over who will replace president Zuma this year, rather (as has been the case since 2007) than over support for and opposition to the president himself. As such, 2017 will be the year in which Zuma’s centrality to the wider debate of the country’s political and economic direction begins to weaken. Discussions will begin to focus more on what follows the president’s damaging tenure, than on the tenure itself. Compounding the effects of this weakening for the president will be the legal challenges he will face in 2017 – none more important, perhaps, than his appeal against last year’s High Court ruling that overturned the National Prosecuting Authority’s (NPA) withdrawal of corruption charges against him in 2009.

In parliament, the ANC caucus, led by chief whip Jackson Mthembu, will likely seek to regain some of its lost ground by assuming a position in key matters which is more in line with public sentiment – such as in the inquiry into the errant former board at the SABC and the role of the broadcaster’s indefatigable former chief operating officer Hlaudi Motsoeneng – and less subservient to the president’s legislative whims, as with the resistance to the president’s ordered review of the Financial Intelligence Centre Amendment Bill.

The ANC’s succession battle will be an all-consuming political theme for the year. Early signs suggest that the primary battle will be between deputy president Cyril Ramaphosa and African Union Commission chairperson Nkosazana Dlamini-Zuma. Yet there are other party leaders whose aspirations cannot be underestimated – such as ANC chairperson Baleka Mbete, ANC treasurer Zweli Mkhize and Free State premier Ace Magashule. If the 2007 and 2012 elective conferences are anything to go by, then rival factions will each put forward ‘slates’ of their preferred top six leaders, hoping to ensure that all their candidates are elected as a bloc and that challengers are completely sidelined. Given the toxicity of the ANC’s current internal strife, such a winner-takes-all approach would likely threaten a further split in the party, one substantial enough to undermine the ANC’s grip on the national majority in the 2019 elections. Given the spectre of this outcome, there is still the chance that a compromise slate could be formed – one led by Ramaphosa, deputised by Dr Dlamini-Zuma, and including some of the other top six candidates currently sparring for political elevation.

A further important theme that cut through last year was the persistent threat of a downgrade of the country’s sovereign credit rating to junk status. Standard & Poor’s in particular provided an important reprieve in June last year, but suggested that key reforms to substantially elevate economic growth, and a dulling in the intensity of political discord, particularly as it relates to the functioning of the National Treasury, were critical for retaining the country’s investment-grade rating.

One of the positive features of 2016, which was somewhat lost in the general political clamour, was the relative stability in labour relations. Last year, three-year wage agreements were signed, without industrial action, for the three largest platinum producers and across the automotive sector, providing stability in these previously volatile areas of the economy out to 2019. 2017 will likely provide a continuation in this general stabilisation, with the major focus resting on negotiations in the metal, steel and engineering sectors, the agreement for which expires on 30 June. Elsewhere, the signing into law of the Mineral and Resource Petroleum Development Act and the agreement on the conditions of the reframed Mining Charter, particularly as it relates to the ‘once empowered, always empowered’ clause, will be critical.

Ratings agencies will announce their reviews of the country’s status in June, the same month that the ANC gathers in Gauteng for its five-yearly policy conference (when the customary demands for ‘radical economic transformation’ can be expected), and again in December, when the ANC gathers to elect new leadership. Politics, and the shape and intensity of potential change in this regard, will therefore again be a central element for ratings agencies in their determinations of the country’s credit status this year.

Gordhan will likely enter the year more assured, galvanised as he has surely been by the profound support he was able to accumulate from across the political spectrum, civil society, business and the public in response to his harassment by the Hawks in 2016. National Treasury will be less encumbered this year by the demands of an election cycle, which may somewhat ease populist pressures on the Budget process. However, balancing the demands of an ideologically divergent ruling party will remain a central challenge this year – particularly when a fringe cohort, trumpeted most consistently by ANC Youth League leader Collen Maine, continues to argue that the country’s conservative fiscal course is largely responsible for the plight suffered by the poor.

Further, the Hawks may still seek to formalise charges related to their allegations that a SARS ‘rogue unit’ was operated under Gordhan’s tenure, though they will likely find a less receptive audience at the NPA in driving these potential demands given the obvious breakdown in relations between Hawks boss Berning Ntlemeza and his NPA counterpart, advocate Shaun Abrahams.

With no lasting solution to the frustrations of the student groups that so profoundly disrupted university activities last year, some degree of unrest must again be anticipated, with a focus both on the beginning of the academic year and the announcement, towards the end of the year, of the anticipated fee increases for 2018. Beyond this, the South African Social Security Agency appears ill-prepared to assume control of the distribution of social grants to around 17 million vulnerable South Africans from current service provider CPS, whose contract expires on 31 March this year. Any disruption to the payment of grants could have serious social consequences.

For the opposition, 2017 will be an important year, too. Both the EFF and the DA will have to begin to find new avenues to exploit voter sympathy as the ease with which they have simply assailed the ANC through attacks on the president’s moral fortitude begins to lose its wider lustre. The primary focus for the DA will be on ensuring it is capable of providing a discernible improvement in the management of the metropolitan municipalities that it now runs. This will be far more straightforward in Nelson Mandela Bay, where the DA holds a fairly comfortable majority, and previous mismanagement was so acute, than it will be in Johannesburg, where the DA’s hold is so much more brittle, and the prior performance of the metro under mayor Parks Tau more credible.

It will in many ways be a holding year for the EFF, one in which the party aims to retain its credibility through emphasising its kingmaker status in key metros; assailing the ANC in parliament; and growing its representation among the country’s as-yet politically dormant ‘born-free’ population. 2017 should be the year in which the National Union of Metalworkers of SA’s much-vaunted political party will be established, aided by former Congress of SA Trade Unions (Cosatu) general secretary Zwelinzima Vavi. Though such an addition would add valuable nuance to the broader political environment, the moment for such a formation to accumulate real national scale may have passed.

Though the context for the year ahead appears to be more benign than the year that has passed, it is unlikely that 2017 will be marked by decisive change. For this, we await the resolution of the ANC’s leadership battle. Still, there will be gaps to be exploited by the president’s loosened grip of the national discourse, and his inability to fundamentally disrupt the grinding process of stabilisation, which is headed in the state by the National Treasury and aided by re-formed partnerships with the private sector. Countering these incremental gains will be those seeking to maximise their current political access through legislative and state procurement channels – their urgency necessitated by Zuma’s replacement by year-end. Focus will in this regard rest on the passage of the nuclear programme, which Eskom continues to champion despite wide public and political opposition.

A different kind of drama will seize SA politics this year – one that follows from the grinding shifts that took place in 2016, and that is determined in large part by the range of potential outcomes offered by the ANC’s elective process. Though the ANC appears to be aware of its institutional and moral failings, it is less clear whether it has the capacity and institutional fortitude to correct them; and, if not, what political constellations will fill the void created by the party’s demise. Answers to these pressing questions will begin to emerge from the fog this year.

Disclaimer: The views and opinions expressed in this article are those of the author and have originally been prepared and previously shared with other financial market participants, primarily institutional clients of Standard Bank.