Taking stock at mid-year, prospects for the world economy seem reasonably bright. Growth surprises have trumped uncertain politics, and uncertain politics, at least for now, seem to have settled. Global growth is expected to accelerate from 3.1% in 2016 to 3.5% in 2017, and remain buoyant at 3.6% in 2018, according to IMF projections. The underpin has been a strong end to 2016, an acceleration in infrastructure and real estate investment in China, rising commodity prices, an improvement in global growth expectations, moderate inflation, strong financial market performance and ongoing monetary support. 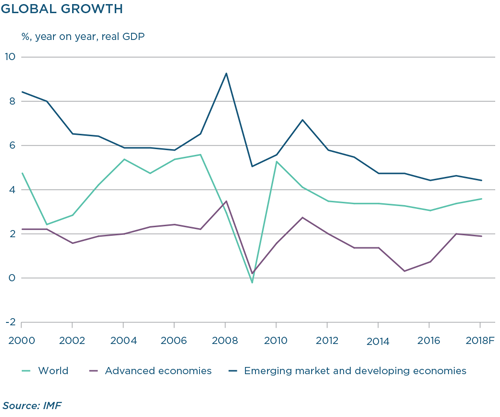 By country, Europe is the stand-out best economic performer this year relative to expectations. With GDP growth for the euro area set to remain strong at 1.7%, a broad base of European economies are performing well. Germany, thanks to an exceptionally strong trade performance, is expected to grow by 1.6%, with buoyant growth also anticipated from Spain (+2.6%) and France (+1.4%). Italy, which has significant financial and fiscal challenges, remains the laggard, and is expected to grow by only 0.8% this year and next year. European forward-looking activity indicators, like the Purchasing Managers’ Index, have in aggregate been at cyclical highs for months, suggesting that current momentum may be sustained for a while.

Projected growth has also been revised higher for the US, despite a weak start to the year and some moderation in expectations that promised reform would have an early, and meaningful, impact on domestic growth. GDP growth in 2017 is expected to reach 2.6% (following 1.3% in 2016), and 2.4% in 2018. There has also been an ongoing recovery in US employment, and with it, decent consumer confidence. Consumer spending has remained subdued, but may accelerate in the second half of 2017. Amid an uptick in oil prices at the start of the year, capital expenditure (capex) in oil-related industries revived at the start of the year, but there has also been a broader rise in capex intentions, and private investment in both non-residential and residential property has improved.

The outlook for the UK is less positive, with the June snap election an unexpected setback for Theresa May’s Conservative Party, that has forced it into a minority government and added both to uncertainty about domestic policy going forward, and, importantly, to the pending Brexit negotiations. Amid this uncertainty, the economic backdrop has weakened: GDP growth slowed to 0.3% quarter on quarter in the first quarter from 0.7% in the fourth quarter, and 1.8% in 2016 for the year as a whole. This poses some downside risk to previous growth projections of 2.1% year on year for 2017 and 1.5% in 2018. The weaker exchange rate is also adding to pressure on import prices, and the Bank of England is likely to face an increasingly uncomfortable situation: moderating GDP growth as price pressure rises. In Japan, growth has picked up, but inflation remains elusive, despite prime minister Shinzo Abe’s commitment to hold interest rates at zero for as far out as another 10 years.

Despite improved growth outcomes across the world, inflation remains benign. An early-year acceleration in headline inflation in developed economies, mostly related to oil prices and base effects, has faded. A great conundrum for monetary policymakers in the developed world has been the slow response of wage rates to tight labour markets. In some instances – the US, Germany, France, Japan and the UK – unemployment has fallen to rates historically consistent with considerably higher wage inflation. This confirms concerns that demand-driven inflation may emerge. There is not a simple explanation why wage inflation has so far remained weak, but a combination of higher rates of labour market participation (more people looking for work instead of dropping out of the labour force), more people who are underemployed (part-time or overqualified, but working for low wages), mechanisation, product-related compensation (online work, paid for on delivery), fading unionism and wage agreements indexed to lower inflation may be contributing. 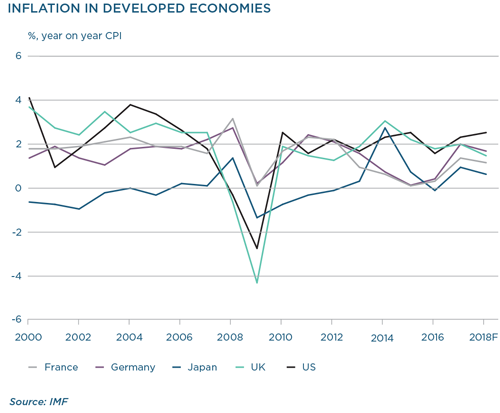 This is a difficult economic environment for central banks to navigate, especially because the very weak momentum in core inflation may also be the result of a complex set of circumstances. Only the US Federal Reserve has embarked on a slow, steady normalisation path – and has signalled not only that it will continue to do so, but that it will implement plans to start the long process of balance sheet normalisation in coming months. The European Central Bank faces structural constraints: high government debt levels in some member countries, the uneven growth revival, coupled with a more recent, more concerning, flirtation with deflation. Accordingly, it has a tolerance for higher inflation (for longer) than would have been the case before. Nonetheless, it has also signalled a less accommodative stance in June, and some intention to taper its active quantitative easing programme. As the Bank of England faces the difficult combination of slowing growth and rising inflation, its monetary policy committee has become more fractured, with three members voting to raise interest rates at the June meeting. The Bank of Japan has sent a clear signal that its accommodative policies will remain on hold for some time.

Emerging market growth prospects are often linked to China, either through the trade in commodities or its demand for light manufacturing. The revival of China’s economy, which gained traction in 2016 to reach 6.9% year on year in the first half of 2017, has contributed to higher commodity prices, providing a fillip for commodity exporters. Since June, the People’s Bank of China has been tightening liquidity conditions, particularly in the more creative lending associated with structured products in nontraditional banking sectors. Over time, this should see growth momentum in China slow, and the property market retrench some of the growth seen over the past one to two years. Slower growth in China implies – broadly – somewhat weaker industrial commodity prices, which are less favourable for emerging markets. That said, growth momentum in many key emerging markets is building off a notably weak base, and should improve this year. Looking ahead, a number of larger emerging markets face idiosyncratic challenges. In Brazil, a political crisis has delayed key legislative reform and the fiscus remains under extreme pressure. In Mexico, policy uncertainty in trade and immigration is muddying its relatively solid economic prospects. In Turkey, the April referendum heralded a change to its presidential democracy which may bring changes to historically conservative fiscal policy. In South Africa, political uncertainty weighs on a fragile economy, undermining confidence and putting long-term growth and fiscal sustainability at risk.

Despite the broad-based improvement in global growth (and, for many countries, enhanced prospects for 2018), there remain significant structural impediments that could undermine a sustained strong upturn. Policy tightening tilts the risks to growth to the downside and raises longerterm political risk. In particular, low productivity, the aforementioned weak wage growth and persistent inequality remain unaddressed challenges, especially in developed economies.