Our portfolios have performed well amid continued strain in domestic markets. The JSE had another poor quarter, with the FTSE/JSE Capped All Share Index losing 1% (1.4% over a rolling 12 months).

The local economy remains mired in recessionary conditions. It is, in fact, deteriorating at an accelerating rate as business and consumer confidence have evaporated in response to a tough economy and very concerning political developments.

Markets are reflecting this uncertainty, and conditions remain as challenging as ever. However, we are comforted by the fact that we find more value today than we have at any time over the last five years. Volatility is not to be feared. It typically presents great opportunity to the patient, long-term investor. We remain alert to opportunity. We also understand the risks that the current environment presents to the real value of our clients’ savings. We believe that it is in these difficult times that we can add the most value to our clients.

The defining positions in our local equity portfolios remain the high-quality global companies that happen to be listed on the JSE (Naspers, British American Tobacco, UK-listed property holdings and Steinhoff). Naspers advanced 10% over the quarter as its key associate, Tencent, reported strong results. Tencent remains an exciting proposition, with new opportunities such as cloud services and payments starting to gain traction.

Despite depressed conditions, we are starting to see value among local companies. We have used the weakness in domestic stocks to start accumulating high-quality stocks that have begun to discount the bad news. Examples include Spar and Pick n Pay. These businesses are battling in the tough trading environment; however, both are highquality businesses that have multidecade track records of performing well in tough economic times. High-quality businesses always fare better than poor-quality businesses in times of adversity.

The much-feared mining charter was gazetted in the past quarter. This is a draconian piece of regulation (it is technically not legislation because it was not passed by parliament) that would ultimately destroy the mining industry if sanity does not prevail. The local mining industry is on its knees and has shrunk significantly over the last decade. However, the decline over this period will be minor compared to the damage this charter would do to the industry, its employees and the surrounding communities. SA cannot afford such a damaging outcome.

We hold some local mining stocks, although they are largely ones that have excellent empowerment credentials (Northam and Exxaro). No miner will be immune, but these companies will suffer less collateral damage than the rest of the industry should this charter come to pass.

We live in uncertain times, both locally and globally. Domestically, growth is low and the consumer is facing unprecedented strain. Globally, growth is more robust, but geopolitics continue to cause much uncertainty.

We remain constant in our long-term valuation philosophy and process to help us identify the right holdings for the fund. This patience and discipline will ultimately deliver long-term alpha for our clients. 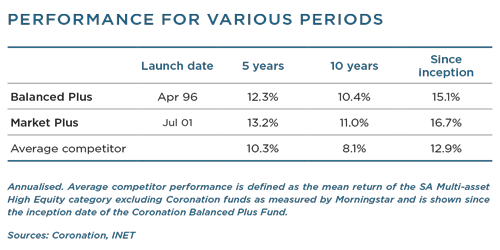 Our balanced funds continued to outperform over meaningful periods.

Global equity markets continued to climb a wall of worries in the second quarter, with the MSCI All Country World Index returning 4.3% in US dollar terms (18.8% over a rolling 12-month period). While valuations have grown steeper than in the recent past, we remain steadfast in the view that global equity returns are likely to exceed those of other major asset classes. We believe that valuations are fair (outside of a few overvalued pockets) and that the global economy continues to heal (albeit slowly).

Our global equity position has performed well, thanks in part to a higher allocation to other emerging markets. These markets continued their strong rally that began in the first quarter of 2016. The MSCI Emerging Markets Index returned 6.3% in US dollar terms over the quarter and 23.8% over a rolling 12 months. Despite the challenges faced by many important countries such as Brazil, China and Russia, we continue to find exceptional businesses with good longterm prospects trading at undemanding ratings. In the past, investors had to pay high prices for good quality companies. Emerging market indices trade close to c. 20% below their absolute peaks and offer a large margin of safety in our view.

We remain of the view that global bonds are in a bubble. Yields in most developed countries trade close to multicentury lows. Notwithstanding this demanding base, the World Government Bond Index has produced negative returns over one, three and five years. We have seen only the smallest of cracks in one of the great bubbles of our time. We remain of the view that the risks of further capital losses are high and therefore do not have any developed market government debt exposure in the fund. We also have very low fixed-rate bond exposure in SA. We believe that fiscal discipline is wavering at a time of steadily increasing government indebtedness. In addition, there are risks to the very strong monetary discipline we have seen in SA since the introduction of inflation targeting in 2000. Should these concerns prove correct, then the outcome will be painful for holders of fixed-rate government debt. We believe that pricing is currently asymmetric, with limited return for the risks investors bear. 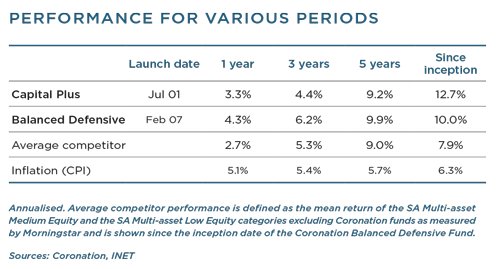 The funds have the dual mandate of protecting capital over all rolling 12-month periods and to beat inflation. While the funds have delivered strong performances over meaningful periods, beating inflation in the near term has proved challenging given the tough investment environment where real returns across asset classes have been far lower than the historical trend.

The strengthening of the rand relative to major developed market currencies over the past year has also been a headwind. We believe a maximum offshore allocation remains appropriate given the benefits of diversification, value in the underlying offshore assets and our expectation of future SA rand weakness.

SA’s deteriorating growth outlook, along with concerns around government finances and an increase in both socioeconomic and political uncertainty, continues to weigh on sentiment. The publication of extremely weak first-quarter GDP data in early June paints a picture of an economy that is heavily constrained and in a technical recession after two consecutive quarters of negative growth. With inflation expectations moderating, it seems increasingly likely that the SA Reserve Bank monetary policy committee will move to a more accommodative stance in the coming months.

From an asset allocation perspective, exposure to local government bonds was further reduced during the quarter given our view that valuations are not attractive on a risk-adjusted basis. Although overall domestic equity exposure remained largely unchanged, we used share price weakness to add to our positions in Aspen, Steinhoff and MTN.

Despite reasonable economic growth in developed markets, inflation remains subdued. In a widely expected move that reflects the US Federal Reserve’s confidence in the domestic economy, US interest rates were hiked in June by a further 25 basis points. The outlook for emerging markets is generally linked to China, either through trade in commodities or demand for light manufacturing. During the quarter the concerns around the Chinese government’s tightening of liquidity in the domestic economy weighed on commodity prices.

In an incredibly uncertain world, we continue to strive to build diversified portfolios that can absorb unanticipated shocks. We will remain focused on valuations and will seek to take advantage of whatever attractive opportunities the market presents us to generate inflation-beating returns for our investors over the long term.

The fund comfortably met its objective of providing a better return than a traditional money market fund for investors with a time horizon between one and three years.

We remain vigilant of risks emanating from the dislocations between stretched valuations and the underlying fundamentals of the SA economy. However, we believe that the fund’s current positioning correctly reflects appropriate levels of caution. The fund’s yield of 8.88% remains attractive relative to its duration risk. We continue to believe that this yield is an adequate proxy for expected fund performance over the next 12 months.

For a detailed investment review of all our funds, please refer to our fact sheets and commentaries in the Funds & Products section of www.coronation.co.za.