Markets have had a tumultuous start to the year as the first-quarter domestic rally rapidly reversed in the second quarter. 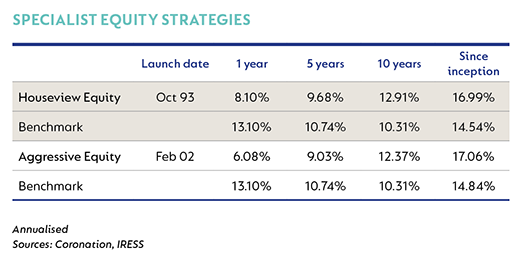 The FTSE/JSE Capped All Share Index returned 2.9% for the quarter with a strong contribution from the resources sector (+20%) while the industrial sector, with its large rand-hedge counters, also rose during the period (+4%). But sectors heavy in domestic stocks such as financials and property ended the quarter down 6.0% and 2.2% respectively.

The strong performance in resource stocks over the quarter was driven by robust pricing across most commodities, partly driven by the Chinese government’s commitment to improving environmental conditions in the country with increased ministerial powers and stringent enforcement of winter production cuts in sectors like steel. The clampdown is creating short-term supply disruption, and premiums for higher quality metals spiked over the winter season as producers focused on efficiency.

In South Africa, the revised mining charter was released during June, bringing some clarity to the domestic resources sector. The charter confirmed the recognition of “once empowered, always empowered”, reducing the risk of ongoing dilution of ownership for equity holders. However, requirements for new mining rights as well as for the renewal of existing mining rights are relatively onerous and will increase investment hurdles for new projects. Anglo American and Northam Platinum remain our largest holdings, while Mondi and Sasol (a beneficiary of strong oil prices) were reduced on the back of strong performance.

We continue to hold large positions in several JSE-listed rand-hedge stocks for stock-specific rather than thematic purposes. The post-elective conference rally provided an opportunity to take profits in certain domestic stocks and add to this group, including to Naspers, Anheuser-Busch InBev (AB InBev) and British American Tobacco (BAT). BAT is a high quality, globally diversified stock trading at the very attractive valuation of 12 times forward price earnings and one of our largest positions. The share has derated along with global staples, though the sell-off was amplified by regulatory fears and concerns around the industry transition from combustibles to next-generation products. We believe the company is well positioned for this move.

AB InBev is another company which we expect to succeed in delivering organic top-line growth in the years ahead and is evolving after it merged with SABMiller. It has experienced growth wobbles as emerging market currencies crashed, coupled with the recessionary environment in which its Brazilian business had to operate.

Domestic financial stocks came under broad-based pressure, giving up most of their post-elective conference gains. The weakness provided an opportunity for us to build a holding in selective domestic banks which should benefit from a pickup in domestic growth. At current share price levels, we think their ratings do not fully reflect these companies’ ability to deliver low teens earnings growth and decent dividend returns in the medium term.

During the quarter, Old Mutual implemented the first phase of its managed separation process. The company split into Quilter Cheviot (the UK wealth business) and Old Mutual Ltd (which mainly consists of Old Mutual Emerging Markets and a 55% stake in Nedbank). We continue to think that both components are attractive investments. Quilter is well placed across the value chain to benefit from the growth in retirement capital as a result of pension reforms in the UK. Old Mutual Ltd owns a mature but cash-generative life insurance business and there should be further value unlock when it unbundles a c. 35% stake in Nedbank in the coming six months. We also took the opportunity to add to our positions in hospital stocks (Netcare and Life Healthcare), food producers and retailers.

As always, valuation remains our beacon in these turbulent times and we have used the volatile price environment to build positions in some attractively priced shares. We believe patience and discipline will deliver strong returns over the medium to long term.

Emerging currencies, bonds and equities all succumbed to immense pressure as global investors de-risked their portfolios. It is not easy, even in hindsight, to say exactly what triggered the exodus but it is likely that the stronger US dollar, higher US bond yields, an expectation of further rate hikes in the US as well as in Europe and all the talk of trade wars started by the Trump government combined to generate enough bad newsflow to spook investors.

South Africa did not escape this global trend. The rand lost 14% of its value relative to the dollar and bond yields surged as foreigners offloaded a massive R65 billion of government bonds over the quarter. The JSE saw a major shift in sentiment too, with domestic-orientated shares under selling pressure while rand hedges were protected, as expected in turbulent times.

Our balanced continued to performed well against their respective peer groups over all meaningful longer time periods.

In the first half of the year, we reduced our weighting in global equities, as valuations have become increasingly stretched and risks increasingly elevated (as a result of trade wars, economic populism and geopolitics).

The portfolios continue to hold large positions in several of the JSE-listed offshore stocks and took the opportunity to add to positions in domestic, high-quality defensive names as the domestic rally reversed and the rand weakened (as discussed in the prior section).

Global bond yields increased in response to the US hiking rates and an increasing aversion to risk. This vindicated the portfolio’s low weight in fixed rate bonds (both offshore and locally). Foreign selling of South African government bonds drove sharply rising domestic yields (and negative returns, with the All Bond Index down 3.8% in the quarter). This offered an opportunity to build a position in bonds at attractive levels. Although valuations reached attractive levels in the domestic market, this was not the case in global markets. In our view, yields are simply too low to justify the risk that comes with the higher levels of indebtedness and weak fiscal discipline from many of the world’s leading economies.

The property market declined 2% in the quarter. We continue to avoid most of the counters within the Resilient stable and find more value in blue-chip domestic names such as Redefine and Investec Property Fund.

As always, valuation remains our beacon in these turbulent times and we have used the volatile price environment to build positions in some attractively priced shares. 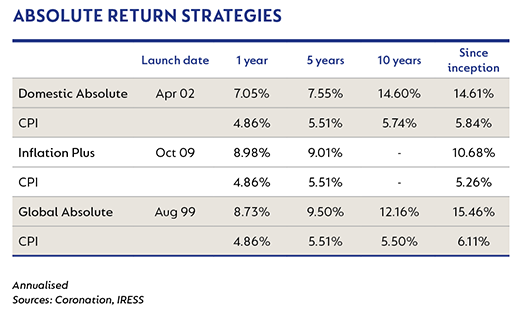 In managing our absolute portfolios, we position the funds as though some bad news may always occur. The decent offshore holdings in the global strategies, a healthy exposure to rand-hedged shares and a low modified duration in the bond portion of the portfolios all helped to protect the strategies against the sell-off, resulting in credible returns. Inflation was 4.8% over the past year and averaged 5.5% over the last 10 years. We delivered real returns ranging between 2% and 4% over the recent 12 months and returned well above inflation over the five-year and longer periods.

The wild gyrations in the market gave us the opportunity to make some meaningful changes to the composition of the funds. The rise in local government bond yields to levels between 9% and 10%, depending on their duration, is particularly attractive to funds such as this with a real return target. Inflation is expected to average between 5% and 6% over the long term. Buying bonds at these attractive real yields was therefore an opportunity that we did not want to miss out on and added aggressively to our holdings. To buy the bonds, we used rand weakness to lighten our offshore exposure in our global funds, as well as reduce the funds’ cash holding.

Within the domestic equity portion of the funds, we trimmed our position in Mondi as this high-quality company’s share now offers limited upside following its stellar performance.  We added to Standard Bank, Naspers, Bidcorp and included newly listed share Quilter, a UK-focused integrated wealth manager, ahead of its unbundling from Old Mutual. The UK savings market is attractive due to recent pension reforms which give individuals more control over their retirement savings, increasing the need for financial advice. With the second largest advice force and platform in the UK, Quilter is well placed for these changes.

Over the short term, the negative attitude to emerging markets may well persist for a while.  However, the high real yields available in the bond market as well as the derating of many domestic shares to attractive levels make us more optimistic of reaching our goal of beating inflation by at least 3% over rolling three-year periods.