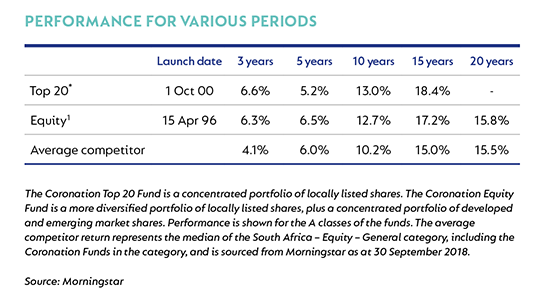 Both the Top 20 and Equity funds mirrored the market’s difficult quarter, declining by 4.0% and 2.2% respectively. In Top 20, our key mining holdings (Anglo American, Exxaro and Northam) were positive contributors to performance. We have added to our holdings in Anglo American and BHP Billiton. In both funds, we continue to maintain reasonable exposure to resources based on our assessment of their long-term value. Our preference for Anglo American (+6%) over BHP Billiton (+2%) – based on a more attractive commodity mix and valuation – continued to contribute to performance, as did our platinum exposure, mainly through Northam (+9%).

Both funds were affected by Naspers’ share price decline on the back of a pull-back in the Tencent share price after disappointing quarterly earnings and Chinese government-related delays in the licensing of new online games. But we remain optimistic about Tencent’s longer-term prospects.

The MTN share price decline also had an effect on performance after the Nigerian authorities accused MTN and its bankers of being in violation of certain foreign exchange regulations. It is our view that the claim has little merit and a more accommodating stance by the Nigerian government bodes well for a positive outcome.

The quarter has been testing, but in this volatile and uncertain world, our objective remains to build diversified portfolios that can absorb unanticipated shocks. We will remain focused on valuation and will seek to take advantage of attractive opportu­nities that the market may present to us and, in so doing, generate inflation-beating returns for our investors over the long term. 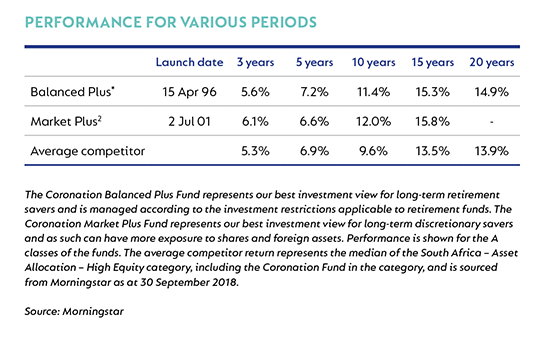 As mentioned above, the past quarter has been a tough period, with most capital markets around the world under pressure. Both the Balanced Plus and Market Plus funds declined, by -0.7% and -1.5% respectively.

Globally, Brexit has weighed heavily on UK markets. Europe has not fared much better, also feeling the effects of Brexit as well as the impact of the rise of populist governments. In the east, China has been under pressure, given concerns about trade wars and the impact on the local currency, while problems in Argentina and Turkey sparked fears of a global contagion in emerging markets.

We continued to reduce exposure to what looks like a very expensive US equity market in favour of the rest of the world, where valuations are more reasonable. We have not yet made the move to buy into developed market debt markets, although with US yields at 3.2% they are close to the point at which we would start adding.

Local equity markets have had a torrid time, with several of the rand-hedge shares not doing well for stock-specific reasons (Naspers and British American Tobacco). Domestic stocks have also performed poorly as many sectors have been exposed to the poor macroeconomic backdrop. In our equity component, we continue to have a bias towards high-quality, more defensive South African businesses, the banks and dual-listed multinational companies.

With local equity markets down over 9% since the start of the year, we are adding to our overall South African equity exposure now as we think this offers compelling value on a medium-term horizon. Our holdings in listed property have continued to languish as the sector remains tainted by the collapse in share prices of the Resilient group. In addition, we have seen a number of property companies reduce their guidance amid tough trading conditions in the office and retail sectors.

Domestic inflation has remained firmly below 6% despite the weaker rand and higher oil price, as the state of the consumer has prevented manufacturers and retailers from passing on the price pressures. In this environment, buying government bonds on yields in excess of 9% – and locking in real yields of 3% to 4% – look compelling. We have added to our fixed-rate exposures so that more than 10% of the Market Plus portfolio now comprise fixed-rate bonds.

We also built a position in integrated wealth manager Quilter following its recent unbundling from Old Mutual. Quilter trades at a significant discount to its listed peers and we believe it is particularly attractive. The fund’s UK property holdings had another disappointing quarter, though we believe the stocks we hold (Hammerson and Intu) are now incredibly cheap.

Some of our consumer-facing domestic holdings had a very challenging quarter and experienced double-digit share price declines. At this point, we are asking ourselves whether the weakness is a cyclical or structural phenomenon. Has the earnings quality of food producers and retailers structurally changed? We do not believe this to be the case. In an economy with high structural inflation, it is extremely challenging for management to navigate a low-volume growth environment.

Only a small recovery in economic growth will significantly ease this burden. This issue has been exacerbated by the current low food inflation environment and, for producers, by additional imports on shelves because of a strong rand at the beginning of the year. As such, we believe some of these pressures will abate and continue to selectively add to the consumer stocks. 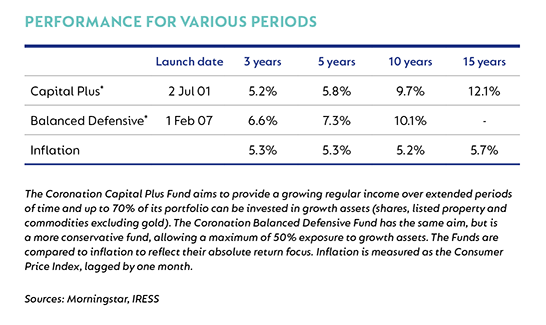 The Capital Plus and Balanced Defensive funds have the dual mandate of beating inflation by 4% and 3% respectively over time and protecting capital over all rolling 18-month and 12-month periods respectively. While we were able to protect capital, the funds unfortunately did not achieve its inflation-plus targets in the recent past (longer term returns are still ahead of the benchmark).

In Capital Plus, we took advantage of the market sell-off during the quarter (the All Share Index declined by 2.2%) to increase the fund’s allocation to domestic equity by adding to our positions in Anglo American, Nedbank and Shoprite. Standard Bank remains one of the fund’s top holdings and we used recent share price weakness to add to our holding. In Balanced Defensive, we added to our positions in Standard Bank, Anglo American and ADvTECH.

The local property sector was again under pressure, declining -1.0 % for the quarter and -22.2% year to date, affecting both funds. We expect domestic properties to show muted nominal growth in distribu­tions over the medium term; however, combined with an attractive initial yield, it offers an enticing holding period return.

The rise in local government bond yields to levels between 9% and 10%, depending on its duration, is partic­ularly attractive to these funds with inflation-beating targets of 4% and 3%. Inflation is expected to average between 5% and 6% over the long term. Buying bonds at these attractive real yields was therefore an opportunity that we did not want to miss out on and have further added to our South African bond holdings during the quarter. Our bond purchases were funded by lightening our global holdings as the rand weakened.

Going forward, we see a far more attractive investment environment in which it will be easier to reach our inflation-plus targets. We believe our portfolios are appropriately positioned for the upturn, though we will never lose sight of the need to be defensive. We think our portfolios are well diversified, our asset allocation is prudent and we have sufficient exposure to growth assets to take advantage of the attractive upside in many high-quality shares.

After a brutal August, September provided a reprieve for South African bond markets, although the aggregate performance was still negative. The All Bond Index fell 0.4% and weakness was concentrated in longer-dated bonds (12+ years) that lost 0.7%. This was followed by the belly of the curve (7 to 12 years), which was essentially flat over the period. Short-dated bonds performed better, up 0.6%, while inflation linkers returned 0.5%. Cash returned 0.6% in September.

In the US, the Federal Open Market Committee (FOMC) raised the federal funds rate by 25 basis points (bps) to a range of 2.0% to 2.3% in September, with the notable change to the statement being the removal of the word ‘accommodative’ in its description of the current monetary policy stance. At this time, an additional 25 bps rate hike is expected at the December meeting, and the central tendency on the dot plot (showing where US Federal Reserve members expect rates to go over the next few years) implies four more hikes in 2019.

The South African Reserve Bank’s (SARB) Monetary Policy Committee left the repo rate unchanged at 6.5% in September, voting four to three to not hike by 25 bps. The hawkish stance represented by this vote, especially in the face of weak growth and the acknowledged absence of demand pressures, suggests that the SARB may be willing to sacrifice growth in the short term for tighter policy and a longer-term moderation in expectations. This increases the risk of a 25 bps hike in November.

At the end of July, shorter-dated fixed-rate negotiable certifi­cates of deposit (NCDs) traded at 8.7% (three-year) and 9.3% (five-year), down slightly over the month. The spreads of floating rate NCDs have dulled in appeal over the last few quarters, due to a compression in credit spreads. There has been a reduced need for funding from banks in South Africa, given the low growth environment. Fixed-rate NCDs continue to hold appeal due to the inherent protection offered by their yields and relative to our expectations for a stable repo rate.

However, credit spreads remain in expensive territory (less than 100 bps in the three-year area and 110 bps in the five-year area). The fund continues to hold decent exposure to these instruments (less floating than fixed), but we will remain cautious and selective when increasing exposure. NCDs have the added benefit of being liquid, thus aligning the liquidity of the fund with the needs of its investors.

We remain vigilant of risks emanating from the dislocations between stretched valuations and the underlying fundamentals of the local economy.

However, we believe that the fund’s current positioning correctly reflects appropriate levels of caution. The fund’s yield of 9.1% remains attractive relative to its duration risk. We continue to believe that this yield is an adequate proxy for expected fund performance over the next 12 months.

As is evident, we remain cautious in our management of the fund. We continue to invest only in assets and instruments that we believe have the correct risk and term premium to limit investor downside and enhance yield.