Unpacking Big Tech, the investment story of the year

The investment story of the year is undoubtedly how significantly the Big 5 US tech companies have outperformed the rest of the market – but the trillion-dollar question is: do these businesses still offer value?

Market views on the outlook for these stocks fall into two broad camps: those who believe these stocks have run so far that they have entered bubble territory versus those who think they continue to offer opportunity given their strong moats and the acceleration of tech adoption driven by the behavioural changes prompted by the pandemic. While the bulls were in ascendancy until the end of August, the bears will find some vindication in the technical correction that occurred in September - that particularly impacted the highest-valued and most widely-owned stocks, such as Tesla and Apple.

Together, these companies are now worth nearly $7 trillion and represent more than 20% of the value of the S&P 500 Index. While they do not dominate the US index to the same extent as Naspers does the JSE, the market cap of these five stocks is roughly 7 times the value of the entire JSE. 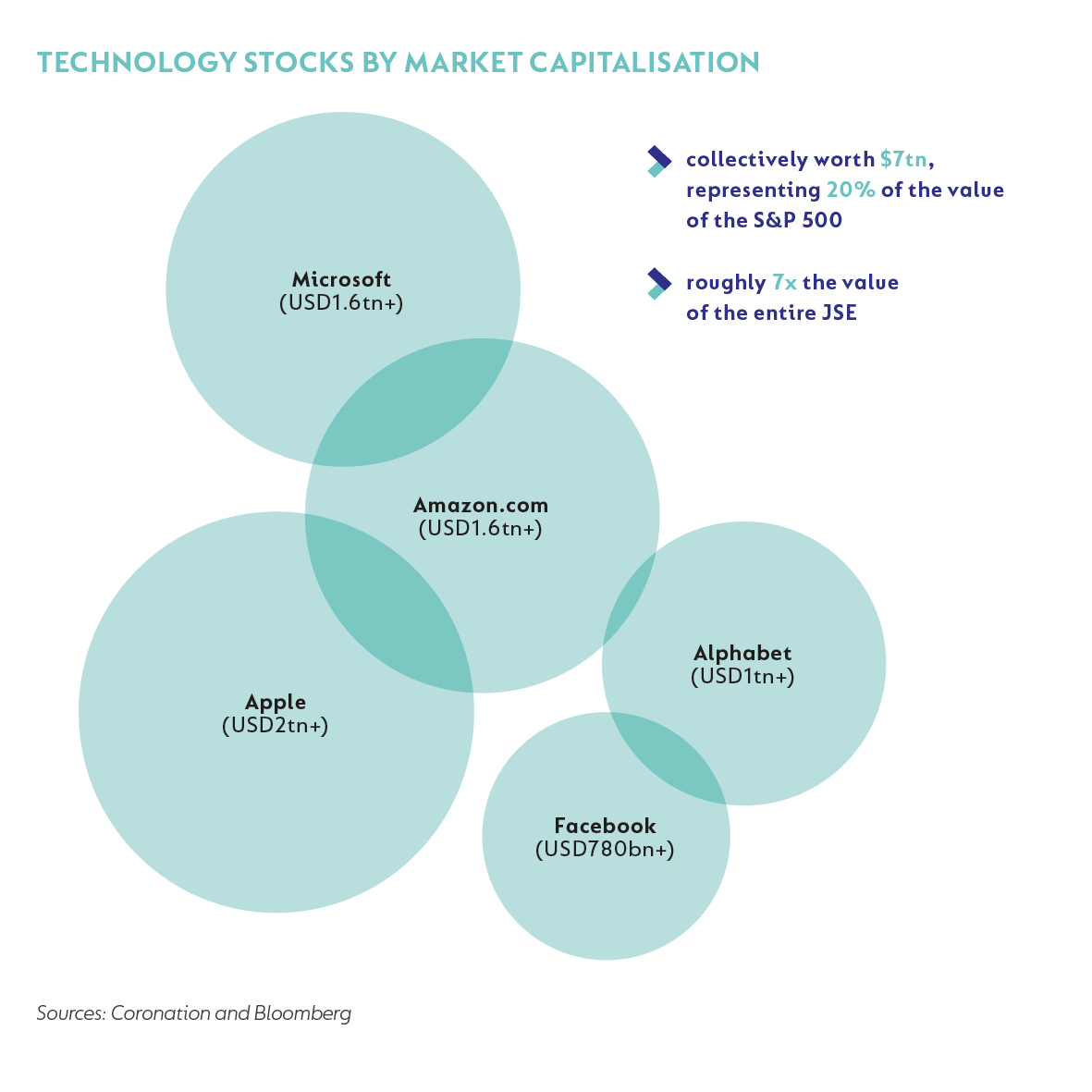 Before the pandemic hit, the services delivered by Big Tech were already ubiquitous. For instance, 82% of US households are Amazon Prime members, which gives them unlimited free delivery for $119 a year, compared with only 53% of US adults who voted in their 2018 House of Representatives election.

Consumer demand for their products and services has taken off because these online giants meet everyone’s basic needs more conveniently and cost-effectively than their competitors, the traditional physical providers of the same services.

The lockdowns, remote working and social distancing required by the pandemic have significantly accelerated the adoption of digital solutions. As an indication of how quickly demand for digital services is growing, Microsoft CEO Satya Nadella said recently that two years of online adoption growth happened in two months.

Have the Big 5 tech stocks any further to go?

Anything can happen over the short term. Over the longer term, our view is that most of these companies are still an attractive proposition on a risk-adjusted return basis. Thus, we still own Amazon, Facebook, Microsoft and Alphabet in our funds.

As a group, the 20 most well-known businesses in the quality category are still trading at slightly higher valuation levels (a forward cash-adjusted price-earnings multiple of 27 times) than the Big Tech stocks we own (24 times on the same basis). Supporting the investment case is our expectation that the tech stocks are likely to produce four to six times faster growth over the next three to five years.

As an active, bottom-up investor, we own businesses based on their individual merits. These include whether they have superior business models, their market position is defendable, they can grow their market share, and there are other supportive secular drivers.

The potential for growth in the sector remains strong. While cloud penetration of IT services has doubled over the past five years, it still only represents 14% of back-end IT spend, which gives it further room to grow. E-commerce penetration have increased by more than 40% over the same period, but it still only represents 10% of total retail spend.

The massive scale of their addressable markets, network effects, high-quality management teams and R&D spend also make it harder for smaller businesses to compete with them.

Spelling out the Big Tech risks

As with all investments, there are risks. In early September it became clear that the 2020 rally became overheated, as it became increasingly fuelled by call option-based bets that prices will continue to rise, placed by a combination of retail and other non-traditional investors. The unwinding of this trend led to a correction.

As fundamental investors, we are more concerned with the longer-term structural risks that may upend the investment case. Specifically, the success of these companies has seen them attract more regulatory scrutiny, primarily as a result of competition concerns. Concerns have also been raised about the fairness of their treatment of employees (e.g. pay and working arrangements of Amazon’s warehouse workers), suppliers (e.g. Apple’s insistence on a 30% revenue share for in-app purchases) and customers (privacy concerns in the case of Google and Facebook).

China-US trade tensions may also have an impact on the sector, with Apple, which both manufactures and sells devices in China, particularly at risk. These companies may also be expected to pay much higher taxes in future.

To minimise our exposure to the risks, we are selective about where we invest, owning some, but not all, of these Big Tech stocks. For instance, we have no exposure to Apple even though it is the largest listed company in the world, with a market cap of roughly $2 trillion. We also take higher tax rates and regulatory costs into account when valuing the businesses.

Also, our funds have an exposure to the Big 5 that is appropriately sized. Our global equity fund has 11% exposure to Big Tech, compared to the index weight of 20% in the S&P500, or the 40% portfolio weighting in a specialist sector index, such as the NYSE FANG+, which bizarrely excludes Microsoft. In our Global Managed Fund, the recommended multi-asset fund for long-term investors wanting a complete, diversified solution solution, this exposure is unsurprisingly lower, at around 7%.

The pandemic has significantly increased risks, which makes attractively priced assets that have the potential to outperform challenging to find. As valuation-driven investors, we always try to cut through the noise and find those assets that offer an attractive risk-reward proposition. While some may think Big Tech stocks no longer deserve their leading role in the year’s investment story, we don’t believe they are ready to take their final bow. However, we wouldn’t recommend rushing out and putting all your eggs in one basket.

The information contained in this article is not based on the individual financial needs of any specific investor. To find out more, speak to your financial adviser.