From volatility through rebound to recovery

The Covid-19 pandemic had a dramatic effect on markets during 2020 and resulted in high levels of volatility. Markets fell rapidly as the virus spread, with the S&P 500 losing a third of its value during the first quarter of 2020 before recovering sharply in late March. Anticipation of an economic recovery was aided by record amounts of stimulus and low interest rates. The rebound continued through the year with the S&P up 18.4% in US dollars (12.1% for the fourth quarter of 2020 [Q4-20]) to end the year at a record high. Notwithstanding the outbreak of second waves of infection, the fast tracking of a vaccine roll-out programme is in place across most developed nations. Anticipation of a return to normal levels of economic activity in the second half of 2021 has supported market sentiment.

The MSCI All Country World Index returned 16.3% for 2020, also ending the year at a record high. European markets were weaker (+5.3% for the year; +15.6% in Q4-20), with the UK market (the FTSE 100 returned -9.0% for the year; albeit +17.2% for the quarter), again dominated by Brexit. Gold (+25.1% in US dollars) had its strongest year in a decade, reflecting concern over the ongoing expansion of central bank balance sheets as countries print unprecedented amounts of money.

Emerging markets also performed strongly, up 18.7% for the year and 19.8% in Q4-20 in US dollars. Asian markets outperformed as they were better able to control the spread of the virus and their economies recovered faster (China +29.7% and South Korea +41.8%, both in US dollars for the year). Our multi-asset class funds benefited from exposure to emerging market equities with strong market performance and good stock picking within the asset class.

The Barclays Global Aggregate Bond Index was up 9.2% in US dollars for the year and 3.3% for Q4-20. We remain cautious on global bonds given the very low yields at which they currently trade, high (and rising) levels of government indebtedness and the risk of inflation. In South Africa, the All Bond Index returned 6.7% for the quarter, bringing annual performance to 8.7% (in rands). This compares favourably to other domestic asset classes.

The rand ended the year 3% weaker against the US dollar, but this number belies the volatility seen during the year. At its weakest, the rand lost almost a third of its value relative to the dollar before strengthening on recovering sentiment globally as well as supportive news out of South Africa. In the third quarter of 2020, GDP exceeded expectations, with the rebound in export activity resulting in a sizeable trade surplus. However, weak import demand reflects poor investment confidence.

The JSE All Share Index (ALSI) returned 7.0% for the year and 9.8% for Q4-20. This performance is flattered by the performance of a few mega-caps. The market has been extremely narrow, with only 20% of shares outperforming the ALSI over the last three and five years. 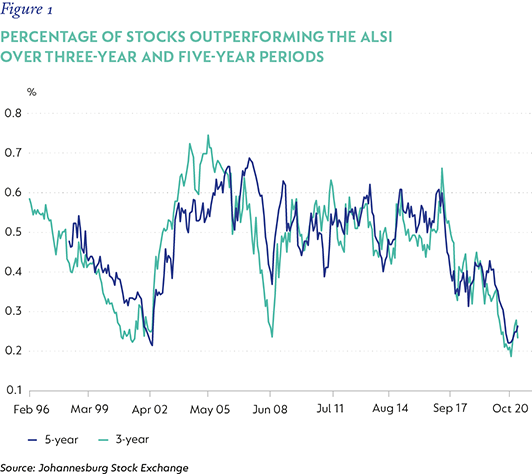 The average domestic share has collapsed and currently trades at roughly half its peak. This is reflected in the performance of domestically concentrated sectors, with a decline in the financials and property indices for the year (Financial Index -19.7%, Listed Property Index -34.5%), even after a fourth-quarter bounce (financials +19.5%, property +22.2%). The industrial sector performed better, returning 7.4% for Q4-20 to end the year up 12.0%. This was driven by a handful of large shares like Naspers (+32%), Prosus (+52.6) and Richemont (+21.5%), which benefited from exposure to more resilient sectors and offshore economies. Resources, with their significant exposure to a resurgent Chinese economy and tight commodity markets, did well (+21.2% for the year).