CBD is the largest retailer in Brazil (and second largest online retailer). It consists of the largest food retailer (75% of our valuation) and the largest electronics and home merchandise retailer (25% of our valuation). CBD’s chairman, Albilio Diniz, is a remarkable individual. At 74 he doesn’t leave the office before 19:00, he works out three hours a day, is regarded as a master retailer, and locally known as Brazil’s retail king. He is renowned for his no nonsense approach and his demand for excellence (as well as his ego). He is the 8th wealthiest man in Brazil and is the richest of those who made their fortune from retail. He has made some mistakes in his life but not too many it seems. The company he built stands as a reflection of the man. Outperforming astute operators such as Walmart and Carrefour, CBD stands as the gold standard in Brazilian food retail and is considered the best by competitors, suppliers and customers alike.

Albilio’s father, a Portuguese immigrant, started CBD as a bakery in 1948. In 1959 he asked Albilio to leave his doctoral studies and rather help open a grocery store. At the time there were just 10 grocery stores in Sao Paulo. Albilio spent most of the next 50 years building (including 48 acquisitions) CBD to become Brazil’s dominant retailer. It was not always a smooth ride, however, and includes a period where he fell out with his family and left the business for 10 years. During this time CBD almost went bankrupt and Albilio was the subject of one of Brazil’s most famous kidnappings. Nevertheless, he returned to the business in 1989 and went about saving and rebuilding the group. Today CBD has 647 food stores, 993 electronics stores and the second largest e-commerce operation in Brazil.

In 1999 the French retailer, Casino, took a 36% stake in CBD and entered into a joint control arrangement with Albilio. The arrangement provided that Albilio would have the deciding vote until August this year, after which the vote – and effective control – passed to Casino. Though undoubtedly successful under Albilio, we believe the change of control is a net positive. The dark side to a character such as Albilio Diniz is that they can be egotistical, extremely difficult and struggle to relinquish control (the current CEO is the group’s fifth since the first outsider in 2003). With Casino carrying the casting vote we believe that CBD will now have the best of both worlds: the involvement and expertise of Albilio; the benefit of Casino expertise (a world-class food retail business with a meaningful emerging market presence) and, importantly, the current executive team will be free to execute on their strategy without interruption.

Given the history of the group as a food retailer and the plight of global electronic retailers in the face of competition from e-commerce, the move into electronics in 2009 could be considered a strange one. CBD always had a presence in electronics through its hypermarkets, but felt that due to retailers being too fragmented, the suppliers (who are few given the necessity of local manufacture driven by steep import tariffs) held all the power and took the lion’s share of industry profitability. CBD saw an opportunity to gain scale through acquiring the second largest (Ponto Frio) and then the largest (Casas Bahia) players in 2009 and 2010. This resulted in the formation of Globex, which now enjoys a position of unrivalled dominance (23% market share versus the number two and three players with 7% and 6% respectively).

To-date the move into electronics has only just achieved profitability. It’s still early days though, with significant synergy benefits to come from the merger. However, time will tell whether the acquisition was just an act of ego – the move was spearheaded by Albilio (reportedly with the approval of Casino) and resulted in CBD becoming the largest retailer in Brazil – or if it will be rewarding to shareholders. One of the wonderful things about investing in public entities is that you can buy (or sell) a holding in a business at almost any time. So while there is a reasonable chance that the move into electronics was value destroying for CBD shareholders at the time, by entering at this point in time (where we believe the current market value is justified by the food business alone and the electronics portion is effectively free) we have much higher conviction that substantial value will accrue to shareholders.

A dominant food retailer is a wonderful business, even more so when the industry is still in its growth phase. On the one hand it is very cash generative, with the business selling mainly on a cash basis coupled with the benefit of long payment terms with suppliers. This can then be used to finance capital expansion. On the other hand it is a business where scale provides strong competitive advantages. Food retail is a low-margin business and being able to negotiate better terms with your suppliers and landlords makes a big difference to the bottom line. Fresh distribution has its challenges, but with scale the business can leverage distribution infrastructure at a cost unmatched by competitors. CBD additionally has very strong brands, recently overtaking Carrefour as the largest food retailer in Brazil with just over 14% market share (Carrrefour sits just below 14%). The number three retailer is Walmart at 11% and in fourth position is Cencosud with 7% market share. All are able competitors and all should succeed with the size of opportunity in Brazil. However, CBD stands as singularly impressive in that it has outperformed both Carrefour and Walmart by over 4% in terms of same store sales growth per annum since 2008.

In Brazil the food retail industry is still very much in its growth phase. In previous articles we have written about the long-term fundamentals of Brazil as a future leading economy and do not intend to go into the reasons again, but suffice to say that as income per capita rises and the demographic dividend is earned, food and electronic retail will be a prime beneficiary of increasing spend.

Low penetration of modern retail provides a further structural underpin to growth. Currently the modern channel accounts for just 50% of food retail (as opposed to 65% in South Africa). The main reasons seem to be a combination of tax evasion by mom and pop shops (allowing them to be competitive), Brazil’s historical high inflation (making food retail a particularly attractive business given the negative working capital characteristics) and some areas of Brazil being too poor to sustain a modern retailer. The government is cracking down on tax evasion, inflation is under control, and government welfare transfers and the growing economy are increasing the addressable market, all of which should enable formal to take share from informal as has happened in South Africa and elsewhere in the world. 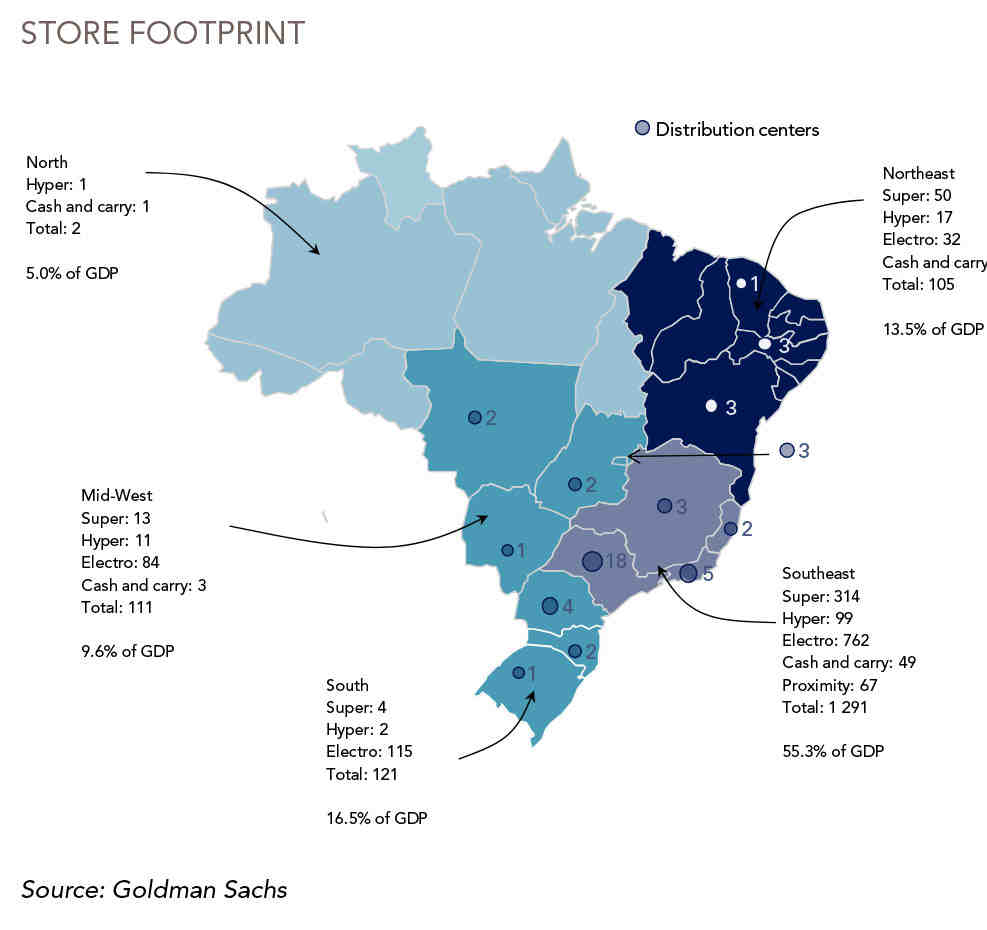 There is also a large opportunity for CBD in terms of geographical presence. As shown diagrammatically, CBD is concentrated in the Southeast part of the country. To the South there is an economy that accounts for 16.5% of GDP, yet CBD has only six stores there. In the populous and fast growing North and Northeast they have just 75 food stores, which is an insignificant number when compared to the 527 stores in the Southeast. A similar opportunity is available to CBD in electronic retail.

In electronics, the company is awaiting competition authority approval (widely expected) in order to capture many of the remaining synergies from the Casas Bahia merger. This alone should dramatically improve profitability but, given that the business is three times the size of the nearest competitor, it stands to reason that they should enjoy substantial scale benefits (similar to those in food retail) and achieve a reasonable level of profitability despite the threat of online retail. The company’s response to online retail has been to develop its own e- commerce operation which is growing quickly and profitably. Currently it is the second largest with 20% market share versus the largest competitor at 23% market share (having fallen from 50% share just three years ago).

We bought a stake (1.5% of fund) in CBD (US listed ADR) during the June sell-off in emerging markets. Even though the price has appreciated by 30% since our purchase (from $38 to $49), we still believe that CBD is attractive given its high quality earnings stream and our view that the company can grow its earnings at a double-digit rate for several years to come.

DAVID COOK is a member of the emerging markets research team responsible for analysing consumer and industrial stocks. He joined Coronation in October 200