Happy 2020 and welcome to the first edition of Corospondent of the new decade.  I know it’s a cliché, but it really is scary how quickly time has gone by and, by that measure, how many of us in this industry have matured. For me, entering this new decade offered a moment’s pause to reflect on the last 10 years and the experiences that have shaped us and left us, hopefully, wiser.

REFLECTING ON THE HIGHS AND LOWS

The start of 2010 was still very much characterised by the aftermath of the Global Financial Crisis. This hangover continued to mar investor confidence for the whole of the last decade, leaving trust levels in the financial services sector at an all-time low.

There was no Spotify, Uber or Netflix (I really can’t remember how I binge-watched those series – DVD box sets, I think!). And of course, no chasing likes on Instagram nor venting through the 140-character limit on Twitter. The tech revolution materially shaped the last 10 years. While it has mostly acted to improve friction points in our daily lives, it has, of course, given rise to other issues.

Sporting highs shaped the beginning and end of this last decade. 2010 was all about ‘Ke Nako’ (‘it’s time’), and hope and euphoria filled our streets as we hosted a very successful football World Cup. The vibrancy of our national spirit was shared with the world one vuvuzela at a time. And let’s not forget last year’s fantastic win by the Springboks who proudly brought home the Webb Ellis trophy, reminding us that we are indeed #StrongerTogether.

But despite these exhilarating moments, the last decade has also been a truly dark and depressing one for our country.

A dark decade for South Africa

And I don’t just mean loadshedding! The 2010s was a troubling decade for local politics, with systemic corruption epitomised by #PayBackTheMoney and #ZuptaMustGo – neatly describing deeply entrenched State Capture and the gross mismanagement of State-owned entities. The hope and potential that were heralded by being included in the rising BRICS grouping has faded, and we currently stare economic ruin firmly in the face. The full costs of rebuilding our economy, and the repercussions of these years of corruption on society and investor confidence will have a material impact on the country for the next decade at the very least.

The global environment has gone through immense change

Globally, we have seen a decade of unprecedented monetary stimulus, resulting in the longest bull market in US history, and taking global stock markets to lofty valuations.

In 2020, we move into an election year in the US, following the December 2019 election in the UK. One cannot help but reflect on the stark contrast between the Obama/Cameron leadership combination and the Trump/Johnson duo currently occupying office. Both incumbents are controversial characters, arguably elected through harnessing the power of social media and targeting disenfranchised voters who feel left behind in this disrupted world.

When the G20 gathered in London in 2009, only a small minority of world leaders would have fitted the right-wing populist mold. Fast forward the decade and radical-right populist parties are securing an increasing number of votes and parliamentary seats across the globe – a marked shift for the first time since WWII.

One leader who has managed to maintain his grip on power throughout is Russia’s Vladimir Putin, who has led the country since 1999! His efforts to reassert his global influence and return to superpower status have endured, but his attempts to revitalise Russia’s economy have languished.

The rise and rise of China

China delivered the most remarkable economic transformation in history over the past decade – transitioning from an emerging market to the second-largest economy in the world. Its large, successful companies such as Huawei, Tencent and Alibaba, have shown great innovation, expanding to now operate head-to-head with US giants such as Apple, Alphabet (then Google) and Amazon.

It is because of China’s rise and subsequent dominance that we expect global geopolitics to remain tenuous, despite the fragile trade truce reached with the US in January 2020.

Climate change and the Greta effect

Global concern for the environment grew through the decade. And when the teenage Swedish activist Greta Thunberg launched her solo climate protest outside her country’s parliament building in 2019, her defiant action sparked a global movement that established her as a powerful influencer on climate change and saw her being nominated for a Nobel Peace Prize. The impact she has made in such a short time through lobbying political leaders and rallying her supporters is extraordinary. Now we need to see actual policy change that adequately deals with the significant challenges we currently face.

A clear illustration of the devastating impact of climate change must certainly be the Australian bushfires that have ravaged the country since September 2019. Governments around the world surely don’t need more of a wake-up call.

Of course, no reflection is complete without looking back at our own organisation over the past 10 years. Our purpose and passion have remained steadfast – not just in the last decade, but in the entire 26 years since we opened our doors. We help millions of people achieve their long-term financial goals – such as a better retirement. It’s a privilege we never take for granted. Our organisational values have stood the test of the ups and downs and continue to endure today.

Our role in uplifting communities through our CSI initiatives and ensuring that our own business reflects the demographics of our country are also deeply important to us.

And it is with great pride that I note that we finished this decade as we did the last, with very strong returns for our clients’ portfolios, continuing to show the strength and resilience of our long-term, active investment approach. The long-term track records across all our strategies have delivered meaningful value to our clients, with 97%[1] of our institutional client assets experiencing positive outperformance since inception.

Figure 1 shows the long-term returns produced by Coronation’s flagship Houseview Equity Strategy since its inception in September 1993. As you can see, our active investment approach has resulted in investors earning 16.1% on their investment over this period. 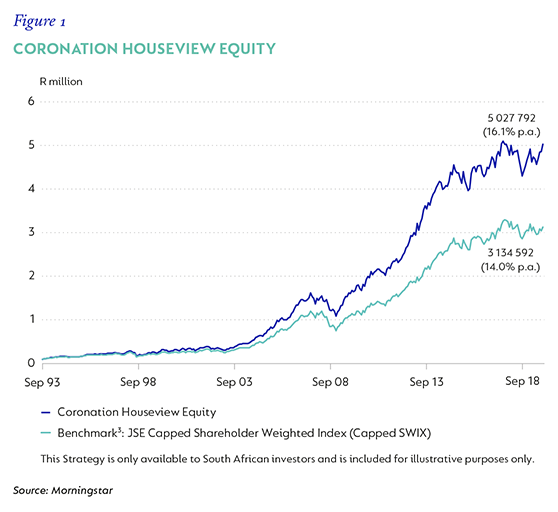 This is an important consideration, given the massive and disruptive rise of index investing over the decade – most recent indications show that index investing now accounts for in excess of 50% of assets in the US, compared to less than 10% in 2010.

During the decade, we showed in tangible ways how we prioritise the needs of our clients. An excellent example is when we closed our South African institutional book to new clients in 2012. This was the largest and longest close ever by a South African asset manager. It was a pre-emptive move to ensure that we did not take on additional client assets and impair our ability to outperform. We re-opened our strategies to new clients in 2017.

Another milestone during the last decade was welcoming our first global clients. Since launching our global franchise in 2008, we have established world-class track records across our entire range of global developed, emerging and frontier markets. All our global strategies, with a track record of more than a decade, have outperformed meaningfully since inception. We are pleased with the strong performance of our Global Emerging Markets and Global Equity strategies over 2019, which demonstrates the discipline maintained throughout the tougher performance periods in prior years.

This decade, we made some significant strides forward in supporting black businesses in our industry. Pre-dating black economic empowerment legislation in South Africa, we pioneered a number of corporate initiatives that continue to contribute to transformation and the development of skills in our industry.

In 2006, we launched the Coronation Business Support Programme, a ground-breaking initiative to grow emerging black stockbrokers. We allocated a minimum of our South African equity brokerage to a group of black-owned stockbrokers annually. Since 2005, we have allocated in excess of R300 million in brokerage to programme participants. For both the industry and the companies themselves, the transformation has been remarkable.

In 2017, we also supported the creation of the first black-owned and managed administration business in the industry and the country, Intembeko Investment Administrators. Now in its second year of operation, Intembeko continues on its journey to become a world-class service provider.

MAPPING OUT THE LANDSCAPE FOR THE FUTURE

In President Ramaphosa’s New Year’s message, he reflected that South Africa still has “many mountains to climb and many treacherous rivers to cross”. The hardships endure for South Africans and the low expected growth forecast for South Africa in 2020 is woefully inadequate if the country is to successfully solve the triple challenge of unemployment, poverty and inequality.

As we look ahead to 2030 and beyond, we are entering a decade – or even two decades – of lower expected investment returns. For the South African looking ahead across the years to their own retirement, what should their strategy be to thrive in this low-return environment?

Our nation desperately needs to develop a stronger culture of saving. And it will require behavioural change at the individual level. The key for any saver is to start to put money away for their future as early as they can . It is simply not possible to play catch up later in such a muted return environment. We will endeavour to educate South Africans through our various channels to help them understand the necessity and benefits of saving consistently over one’s life.

And of course, we are all hoping that the lights don’t go out permanently.

Another decade of gratitude

Thank you for your ongoing support over the years. We would not be here without you. I wish you a happy and successful year ahead and, in true Coronation style, a prosperous and positive next 10 years.

While, our country does not seem to be heading in the desired direction at this point and is a source of frustration and despondency for us, I am reminded of the timeless words of Dr Martin Luther King Jnr. – “If you can’t fly then run, if you can’t run then walk, if you can’t walk then crawl, but whatever you do, you have to keep moving forward.”

Sound advice for us all as we head into the next decade.

Good luck out there!

We’re up for the challenge

Feeling in the dark? Shining a light on uncertainty

“May you live in interesting times” – Chinese curse