DESPITE CONSIDERABLE POLITICAL risk and heightened geopolitical tension, global growth in 2017 was the best in years. The world economy grew by 3.6% last year, and most economic indicators suggest at least a repeat is possible in the year ahead. In fact, on forward-looking data, including late-2017 purchasing managers’ surveys (PMIs), IMF projections of 3.7% may be too low, and a number of forecasters have already boosted their estimates made at the end of last year. From an economic perspective, growth seems likely to continue swimmingly, at least for now. A closer look at drivers and risks suggests the upswing has been broad-based and looks durable. And this is indeed a consensus view, but while a concentrated consensus is comforting, it also breeds complacency. 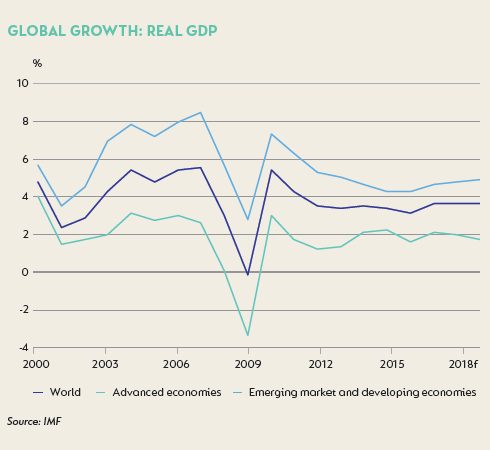 One of the main drivers of the growth recovery of 2016-2017 has been a revival of global trade, despite the emergence of protectionist politics in some countries. The chart below shows the rate of change in the volume of import growth in developed economies, and the rise in export growth in emerging markets. For a long period after the crisis both remained subdued, reinforcing weak growth outcomes in both emerging and developed markets, and putting commodity prices under significant pressure. This in turn had a material negative impact on growth, especially in emerging markets. 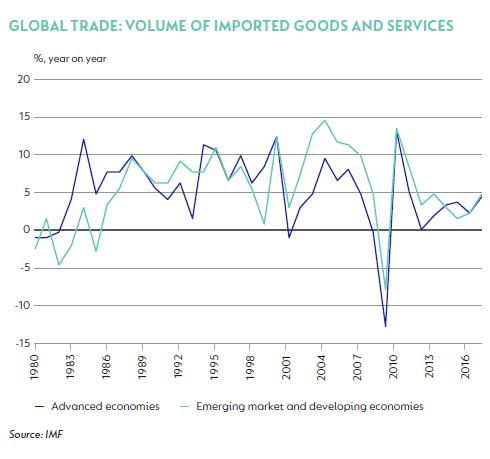 Using World Bank data, the chart below shows the relationship between the change in commodity prices, and the change in emerging market terms of trade for goods and services. The ongoing acceleration in commodity prices in the early part of 2018 certainly bodes well for emerging market terms of trade, providing fundamental support for these currencies. 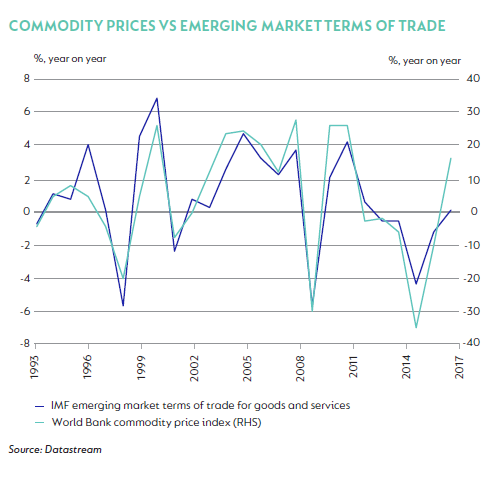 China continues to have a significant impact on growth and trade. Chinese GDP is expected to have expanded by 6.8% in 2017, driven by very strong and resilient property demand and investment, rising commodity prices and a very supportive global growth environment. Concerns that slowing credit extension and monetary deleveraging would weaken growth and property activity turned out to unfounded: household borrowing helped to extend the property boom last year. But the tide is turning, and property sales have slowed meaningfully. A greater focus on deleveraging suggests the weakness will continue. With the property market under increasing pressure, weakness could spill over to general activity and related commodity prices, although some of the slowing may be mitigated by relatively low housing inventory stock, improved profitability in the corporate sector and resilience in household spending. The IMF expects China’s real GDP to slow to 6.x% in 2018 given tighter financial regulations and an ongoing policy focus on deleveraging.

Despite the decent acceleration in global growth, inflation has remained subdued. The reasons differ in each country, but a combination of excess capacity, persistently low wage increases despite tight labour markets, rising participation rates and, until recently, low commodity prices have all contributed. This has allowed central banks, especially in developed economies, to maintain very supportive monetary policies, even as growth picked up.

At this stage, it is hard to find hard data which suggest that strong global growth is at risk. PMI surveys for manufacturing and services, which incorporate sub-indices for business activity, orders, inventories and sales, remain very strong – in many countries, these indicators at multi-year highs. But a concentrated consensus should always ring alarms, and indeed there are some persistent concerns:

Short of one (or more) of the above risks materialising, the prospects for good global growth remain positive. The more durable the period of positive growth, the more likely it is to become reinforcing, as healing economies improve fiscal positions, household balance sheets, corporate profitability and, importantly for long-term stability, a general improvement in living standards.