The domestic market had a roller-coaster ride in the final quarter of 2017 as the rand volatility caused a large amount of market movement given the high weighting to dual-listed shares in the FTSE/JSE All Share Index (ALSI). The rand sold off to R14.50 mid-November and then retraced to end the year at R12.40 after the results of the ANC’s elective conference of December were welcomed by the market.

Still, domestic equities delivered strong returns in 2017, reversing the lacklustre performance of the past few years. The FTSE/JSE Capped All Share Index returned 18.1% for the year, compared to an annualised 8.9% over the previous three years.

The return in US dollar terms was 30.6% thanks to rand strength, reflecting a positive shift in sentiment on the back of the appointment of Cyril Ramaphosa as ANC president in December. Mr Ramaphosa is expected to introduce better fiscal discipline, though a divided party leadership will make necessary policy reform challenging.

In addition to the positive currency response, domestic shares rallied strongly as short positions were closed and investors tried to hurriedly gain exposure. This was very positive for our holdings in financial stocks such as Nedbank and Standard Bank, and the retail exposures held via Woolworths and Spar. While we agree that the outcome of the ANC’s elective conference was net positive for SA, structurally the economy faces some major challenges, which are likely to keep a dampener on growth. As a result, we believe that many domestic shares now look quite expensive relative to their growth prospects.

In particular, the past quarter’s rally in domestic banks (+28%) is cause for review, with higher earnings expectations being priced in. Domestic bank valuations are pricing in a more optimistic outcome. Slow advances in growth over the last few years could be accelerated with more accommodative economic growth, though a benign credit cycle leaves little room for credit loss improvements. We have adjusted position sizes to reflect a reduced margin of safety.

Calendar 2017 was a relatively robust year for commodity prices, with most strengthening as Chinese demand remained resilient. Supply remained constrained as miners persisted with disciplined allocation of capital and Chinese environmental regulation capped domestic supply. While higher commodity prices have reduced the margin of safety in resource valuations, reasonable exposure are maintained to Exxaro, Anglo American and Mondi.

In contrast, some of the dual-listed shares on the JSE do look quite attractive once again and we have added to two positions in particular.

First, British American Tobacco (BAT) has pulled back quite substantially and is now rated well below its peers in its category. We think the outcome of the recent deal to buy out Reynolds American Inc. will provide plenty of opportunity to deliver strong results in the years ahead as cost synergies are extracted and the revenue synergies from rolling out BAT’s full product suite in the US is achieved. The potential reduction in US tax rates is a further fillip to the group, which now has a significant portion of its earnings derived from the US.

Secondly, we have added again to our position in Mondi, having sold down substantially earlier in the year. Mondi has now underperformed the ALSI after advising the market that while its results would be solid, it would be a couple of percent behind market expectations. Strangely, the market took this very negatively and the stock sold off almost 20% from peak to trough. We think the fundamentals for the company remain very favourable and all evidence is of further price increases to come for its key product ranges. In addition, Mondi has announced a transaction in the consumer packaging space which should be earnings accretive, and we still expect a special dividend to be announced with the company’s results. All of this adds up to an attractive investment case and we have increased our exposure to Mondi significantly.

During December, the Frankfurt- and JSE-listed general merchandise retailer Steinhoff announced that its CEO would be stepping down and that its financial statements could not be released due to what appears to have been a number of years of misstatement of its audited accounts. This resulted in the price of Steinhoff collapsing, which had a negative impact for the quarter. As things stand today, we have not received any further information to be able to assess the scale and magnitude of accounting irregularities and the impact this will have on the value of the company. Steinhoff owns many retail assets around the world, including the iconic locally-based Pep group and businesses such as Poundland (in the UK), Conforama (in France) and Mattress Firm (in the US) which are, on their own, valuable companies.

We enter 2018 with a number of compelling holdings in the portolios that we believe will continue to deliver strong results in the years ahead and support investor returns over the medium to long term. 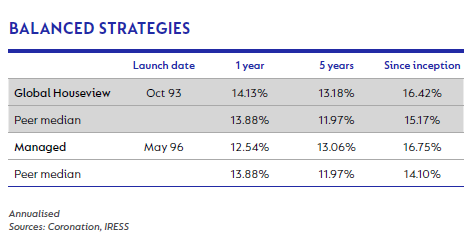 Our balanced strategies, Global Houseview and Managed, continued to deliver outperformance over meaningful periods. The strong run in global equity markets continued into the quarter, with a quarterly US dollar return of 5.7% (MSCI All Country World Index) supporting the 12-month number at 24.0%.

Major markets were broadly strong across the developed and emerging world, with both the US and eurozone reporting healthy growth. This was achieved despite political tensions continuing to boil under the surface – North Korea’s ongoing development of its nuclear agenda, alleged Russian interference in US politics and a tumultuous Middle East.

As the economic outlook for most markets remains good, with Europe, Asia and the US still showing very positive underlying growth metrics, we do not believe we should be underweight equities, but given high levels of valuation, it is no longer prudent to maintain a large overweight position.

The recent rand strength and a rally in domestic assets meant the large offshore holdings and limited exposure to government bonds detracted from performance in the quarter. Over the longer term, significant offshore exposure remains a meaningful contributor to the performance of the funds.

The past quarter's domestic rally in equities has created the opportunity to buy some of the more attractively valued rand hedge shares as the market prices in a very optimistic economic outcome domestically, despite lingering challenges. The overall portfolios remain largely unchanged, consistent with our commitment to invest where we see long-term opportunity.

Along with SA stocks, domestic bonds have had a very strong rally at the end of the year. Given our very low exposure to government bonds, this was also a detractor from our performance in the last quarter. The rally presented an opportunity to further reduce our exposure as the domestic bond market faces a number of challenges in the year ahead.

SA’s dire fiscal position will require much greater funding, especially as the parlous state of state-owned enterprises’ finances becomes more evident. With debt to GDP spiralling ever higher, worsened by the prospect of free tertiary education, we do not believe current bond levels are sufficient to reward investors. As our debt rating moves to junk across all rating agencies, we do not see the potential pool of investors getting any bigger. Instead, it will shrink.

Importantly, this is happening in an environment where we see government bond yields in developed countries starting to rise, which will put further pressure on domestic bond yields.

Offsetting our low domestic bond position has been our high weighting in domestic property. While this did perform better in the last quarter, it has not yet responded to the election of Cyril Ramaphosa as ANC president to the same extent as the bond market. Yields on domestic property stocks remain very attractive, with many in double-digit yields, with the prospect of further earnings growth. We remain overweight this particular asset class, with expectations of decent returns before any capital growth.

Within the offshore component outside of equities, we are also very underweight bonds, with the exception of a few high-yield opportunities where we believe the credit spreads will more than compensate for adverse yield.

Given the current structure and holdings of the strategies, we believe we are well positioned to continue to deliver inflation-beating returns in the future and a performance ahead of benchmark, in line with our long-term track record. 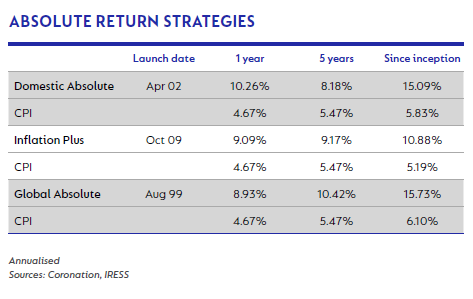 The absolute return portfolios all have dual mandates of beating inflation by a certain target, while also protecting capital. The strategies continued to achieved their mandates in the past period, delivering strong performances.

In the period under review, domestically-focused stocks gained sharply, while bond yields dropped sharply, turning a poor year for bond investors into a good one. The All Bond Index ended up delivering a total return of 10.2% for the year of which 5.7% accrued in December alone.

In the bond component of the portfolios, we had an extremely short modified duration leading up to the Medium Term Budget Policy Statement. The very disappointing budget then drove yields to attractive levels, allowing us to buy some longer-dated government bonds at an average yield of 9.8%. The portfolio was therefore better positioned to benefit from the sharp improvement in yields subsequent to the ANC’s elective conference.

The strength in the rand towards year-end had a greater negative impact on performance as it impacted the value of the fund’s offshore holdings, as well as many of the large equity holdings such as BAT, Richemont, Anheuser-Busch InBev, Mondi and other rand hedge stocks. BAT in particular looks cheap for a global consumer staple on a one-year forward price earnings ratio of 15.4 times, with the opportunity to grow earnings through next-generation tobacco products and margin uplift on the back of the recently completed Reynolds takeout.

Over the course of the year, the biggest contributors to performance were Naspers, Anglo American, global equities and Mondi. Major detractors include Steinhoff, US dollar cash, Aveng and RECM & Calibre.

Looking forward to 2018, the market will be focused on how Mr Ramaphosa will lead the ANC and, in particular, for how long Jacob Zuma will remain president of the country and therefore in control of key cabinet appointments and government policy.

In our view, the deeply divided top six officials of the ruling party and its national executive committee will make it difficult for the new president to act decisively. We think the markets have been too euphoric in its assessment of recent events and expect some retreat in those market sectors that were so buoyant in December.