The third quarter (Q3-22) began with asset prices rallying off a depressed base as markets looked out towards a peak in both inflation and central bank tightening. However, the promising start could not be sustained, and the rally faltered as central banks raised policy rates more aggressively than expected to quash inflation that remains persistently high amidst unemployment levels that remain persistently low. Risk aversion returned once again, pushing bond yields to levels not seen since before the Global Financial Crisis and returning equity indices to levels below those experienced in June.

The quarter ended with the domestic Capped SWIX Index 2.4% lower, listed property down 4.1% and the All Bond Index marginally positive. Global markets fared worse than this with the MSCI All Country World Index 6.8% lower, the MSCI Emerging Markets Index down 11.6%, and the World Government Bond Index down 7.6%. Ongoing dollar strength was a feature of the quarter, resulting in a rand that was 10% weaker against the USD, cushioning the impact of the declines in offshore markets. Taking into consideration the impact of the negative moves of the first half of the year, over the past 12 months no asset class has delivered returns in excess of South African inflation, which is itself elevated at 7.6% but below levels currently being experienced in most developed markets. As a consequence, the Strategy’s performance as at 30 September 2022 is shown below: 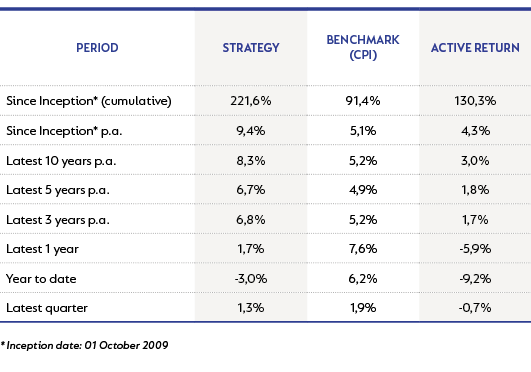 The Strategy’s allocation to global assets continues to be the largest detractor from performance over the past year. Exposure to the global equity portfolios contributed negatively to Strategy performance, although rand weakness resulted in positive contributions from these funds for Q3-22. We retained exposure to the low-risk Coronation Global Capital Plus Strategy and this, along with put protection (currently covering 20% of global equity exposure) has provided some offset to the negative returns.

Domestic assets have contributed positively to Strategy performance over the past 12 months, with good equity and bond selection delivering returns ahead of their respective indices. Within domestic equities, holdings in British American Tobacco, Anglo American, RMI Holdings, Glencore and Exxaro were the largest contributors to returns, while holdings in Aspen, Quilter, Spar and Richemont detracted.

RMI has been one of the top performing shares on the SA market over the past year. Following the announcement in September 2021 of the unbundling of its stakes in Discovery and Momentum Metropolitan Holdings as well as the disposal of its stake in the UK property and casualty insurer Hastings, RMI has continued to perform strongly. Proceeds from the disposal have been applied to paying down debt and returning excess capital to shareholders. We consider the remaining business, OUTsurance, to be one of the more attractive growth businesses in our market as it expands beyond the domestic personal lines insurance core business into adjacent insurance markets and other territories. The company is run by a highly entrepreneurial and energised management team that is closely aligned with shareholders by virtue of their 10% shareholding in the business. The share currently trades at a small discount to the valuation disclosed by management in the latest NAV stack-up, which following the group restructure will likely not be disclosed again. We believe the market anchors off this number, which fundamentally undervalues the business. RMI represents 2% of the SA equity carve-out or 0.4% of Strategy.

Within domestic fixed income, the biggest contribution came from holdings in inflation-linked bonds (ILBs). We continue to see real yields on offer from SA government bonds as attractive, in part due to the benefits of an improved fiscal position, following a period of high commodity prices. This notwithstanding the structural challenges faced by the domestic economy and an ongoing rise in global bond yields. Risk is managed by keeping the duration of the Strategy’s bond carve-out lower than that of the ALBI but at a real yield that remains compelling.

During the quarter we were net sellers of SA equity, and buyers of SA fixed income including ILBs. In addition, we have added exposure to global equities as they continue to sell off and we see the opportunity set as increasingly attractive. This included reducing some exposure to the Coronation Global Capital Plus Strategy in favour of the Coronation Global Equity Select Strategy. Although it is difficult to call currency moves with great conviction, we will take active views when we feel that these moves are extreme, using currency derivatives (the derivatives position will benefit from rand strength and detract if the rand weakens). Towards the middle of the quarter, we closed out a position as the rand strengthened towards R16 to the USD, but at end of the quarter, as the rand breached R18 to the USD, we once again hedged a portion of the currency exposure. 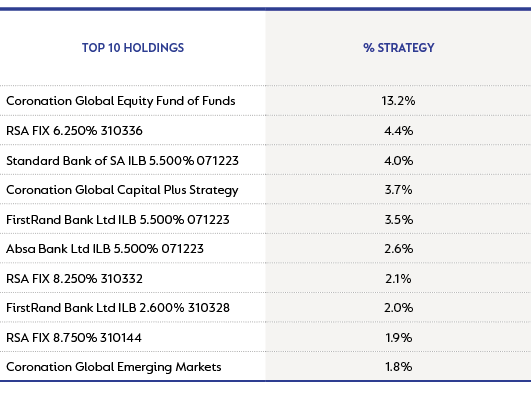 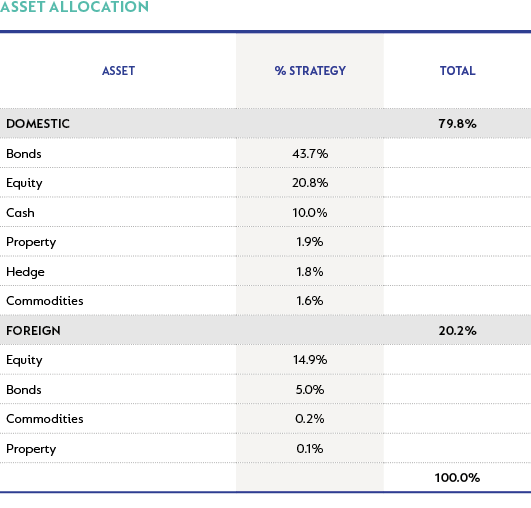 The global economy continues to face an unprecedented number of challenges simultaneously: an energy crisis, particularly in Europe; growing concern about Chinese policymaking and growth, including the impact of sporadic Covid lockdowns and a troubled property market, as well as its intentions towards Taiwan; the ongoing war in Ukraine, in which tensions appear to be escalating further as Russian president Vladimir Putin threatens the nuclear option; as well as significant global inflation and monetary policy tightening. To top this off, at the end of the quarter the debacle around a poorly thought through and unfunded fiscal stimulus package from the new leadership in the UK, forcing intervention by the Bank of England, has contributed to further nervousness in global markets. While this is currently a crisis specific to the UK, there is risk of contagion as fears emerge (rightly or wrongly) about something similar happening in other markets.