The investment case for Distell

A gem within the small- and mid-cap space 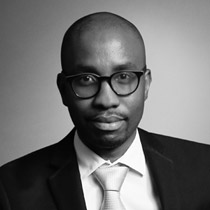 THE SMALL- TO MID-CAP space is littered with a lot of poor-quality companies. Such companies tend to flourish under favourable economic conditions and struggle or cease to exist when conditions deteriorate. They also often exhibit a combination of the following characteristics: lack of scale, price taking, inexperienced management teams, weak balance sheets and lack of product diversification.

As a result of these factors, the market generally punishes the small- to mid-cap sector by awarding a discount to its rating relative to the market. So, when we find a small- or mid-cap counter that generally displays the opposite of the above characteristics but is priced attractively, we get very excited. We think Distell is one of those companies.

Distell is an alcoholic beverages business with its head office located in Stellenbosch. The company boasts a diversified portfolio of brands across several categories including ciders, spirits and wines, and generally ranks first or second in these categories. Production facilities are spread throughout South Africa as well as various countries on the African continent and in Europe. Some of Distell’s well-known brands include Savanna, Hunter’s, Viceroy and Klipdrift. Figures 1 and 2 show the split of profits by product categories and main geographies. The biggest contributor to profits is ciders (42%) and the biggest region is South Africa (74%). 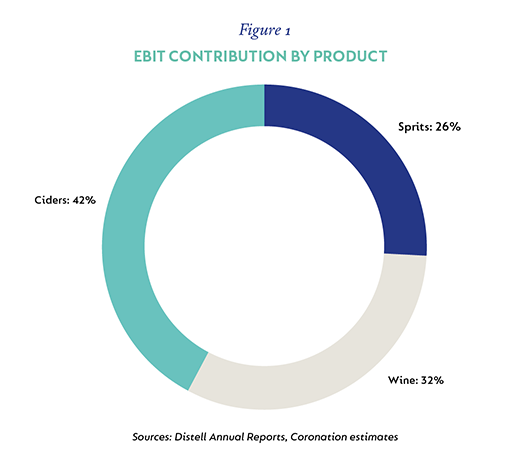 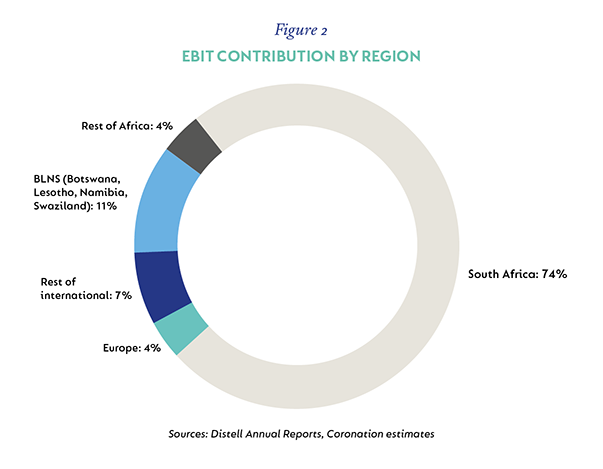 The South African alcohol market is mature, exceeding R200 billion in annual spend and a relatively-high per capita consumption. Overall market growth has been very pedestrian over the past decade, and changes in market share between categories and premiumisation have been the key drivers of growth.

The beer category has the largest market share, but has been losing ground to other categories, including ciders and spirits. Trends in the consumption of alcohol have been changing from single- to mixed-gender occasions, the rejection of beer by health-conscious millennials and a notable increase in female drinkers.

AN APPLE A DAY

This shift requires companies to have a broad portfolio of brands to cater to these trends. Luckily, Distell has a portfolio that is very well suited to these changing market dynamics. Over the past couple of decades, the growth in cider has been phenomenal, at two to three times the rate of beer. In South Africa, the category now occupies 9% of the market, compared to around 6% to 7% internationally, making it the second biggest cider market in the world after the UK.

Distell produces Savanna and Hunter’s, the number one and two brands on the market, with a combined share of over 80%. These ciders have led to an impressive growth in group volumes and revenue of 5% and 10% per annum, respectively, over the past 10 years. This stellar growth is even more impressive when one considers that growth in the spirits and wine categories has been lacklustre due to the maturity of these markets.

This growth has also attracted several competitors into the category. In South Africa, consumers tend to lump ciders together with other flavoured alcoholic beverages (FABs) as one category, thus creating a bigger pool for competitors to attack one another. The biggest competitors we worry about are Amalgamated Beverage Industries’ (ABI) Flying Fish (a flavoured beer) and Heineken’s Strongbow (a cider). While Flying Fish initially had some impact, it has faded, as ABI has been distracted by bedding down its acquisition of South African Breweries (SAB) . On the other hand, Heineken, which boasts the largest cider brand (Strongbow) in the world, has had a negative impact, especially on the Hunter’s brand.

However, Distell’s overall market share has surpris­ingly increased during this period. The company has been able to innovate by introducing brands like Bernini, a wine cooler, which leverages its strength in the wine market into the FAB category. This innovation has allowed Distell to fend off narrow competition looking to attack some of its big brands. It also demonstrates the value of having a deep, diversified portfolio of brands to choose from. Given the low overall market share of the cider category, we believe the category has more legs for growth.

Due to historical reasons, Distell’s distribution of production facilities has been below optimal. This has contributed to a significant number of inefficiencies in its supply chain. A massive project to correct this has been undertaken, which involved closing some facilities while relocating others closer to their respective markets. The benefits of this are multifold. Being closer to the markets allows better response times while reducing inventory holding time, thereby reducing the working capital cycle.

Moving production to bigger, scalable sites and decommissioning smaller, inefficient operations should also result in a lower unit cost of production. These changes should improve both margins and free-cash flows over the next few years.

Excluding the last five or so years, Distell’s exports to African countries were booming, growing at double digits for several years. However, the slump in commodity prices led to currency fluctu­ations and a decline in demand for imported products in these countries. Some even raised import duties as they scrambled to fill gaps in their fiscal funding. This exposed the fragility of Distell’s export model as markets such as Angola, which used to import in excess of 30 million litres of Distell’s ciders, became miniscule. As a result, Distell has been evolving its Africa strategy. While previous exports had been pretty much split evenly between the three product categories, their main thrust will now be through mainstream spirits, with ciders and wine comple­menting this.

Mainstream spirits are one of the fastest growing alcohol categories in Africa. The category is still very fragmented, with a number of regional, privately owned players in the game. However, Distell has a lot of experience in the category, being the biggest producer of mainstream spirits in South Africa, and should be able to leverage this knowledge into developing the category in these markets.

In order to defend against the import duties and currency fluctuations, Distell created in-country production facilities and increased local sourcing, while partnering with local operators to build a strong route to market. A couple of acquisitions, Best (Angolan) and KWA (Kenyan), were done to create critical mass and leverage existing production facilities. These are some of the fastest growing mainstream spirits companies in Africa.

Multicategory production facilities have already been built in these countries, including Nigeria, and should start ramping up over the next few months. This should enable the African business to be more resilient through the cycle while partici-pating in the inherent growth potential of these markets. Recent results have been promising as revenue grew strongly by 19%.

We think Africa offers a multiyear opportunity from which patient investors should be able to reap rewards in the years ahead.

Just over five years ago, significant changes in management were implemented at Distell. Although previous management had led the company well for a decade and a half prior to that, it became clear that there was a need for fresh blood to take the company to the next level. The appointment of Richard Rushton who had previously worked at SAB in Latin America was a game changer for the business. He has executed on the strategy in an exemplary manner, improving production efficiencies, expanding distribution, strengthening the route to market, changing the Africa business model and reducing the international footprint, as well as selling underperforming brands like Bisquit. This led to an increased focus on margins, returns and capital allocation.

At the end of the day it all boils down to valuation. Distell trades at a forward multiple of 11 times to our assessment of normalised earnings, which is very attractive. As such we continue to be significant shareholders in Distell.