Zimbabwe and the investment case for Zimplats

“Your perception may not be my reality.” – Aporva Kala, author and philosopher

Floris Steenkamp is an investment analyst with eight years of investment industry experience.

“Your perception may not be my reality.” – Aporva Kala, author and philosopher

SHARE PRICES IN Zimbabwe doubled in the first three months of 2021. Historically, strong share price performances in Zimbabwe have been a negative sign, usually driven by investors buying equities as a store of value when there were serious currency concerns. For the first time in years, we believe that this performance is, instead, largely driven by fundamentals.

The country, once known as the Breadbasket of Africa, became the textbook example of how economic and political policies can ruin an economy. The general perception is that of a country where money printing and hyperinfla­tion is the norm, where indigenisation destroyed property rights and where foreign investors never get their money back. In summary, the perception is that Zimbabwe is uninvestable.

Over the past few months, we have spent a lot of time talking to businesses in Zimbabwe. These conversations highlighted the gap between perception and reality. Firstly, they emphasised how Zimbabwe has completely disappeared off the radar of international investors. Many companies mentioned that no other investors had spoken to them recently – some had not spoken to investors in almost two years.

Secondly, there have been dramatic changes in the country over the past year. While we are not saying that the issues in Zimbabwe have been resolved, we think that people underestimate the significance of these developments and we suspect that the international investment community is completely unaware that manage­ment teams in Zimbabwe are the most upbeat they’ve been in years.

The currency situation saw the biggest improve­ment. In June 2020, a weekly foreign exchange auction was introduced, and the difficult decision was taken to allow the currency to devalue to a level that more closely (although not completely) reflects demand and supply dynamics. Figure 1 shows that the official and parallel rates stabilised, the gap between the two rates narrowed and it is our understanding that transaction volumes in the parallel market had declined meaningfully. 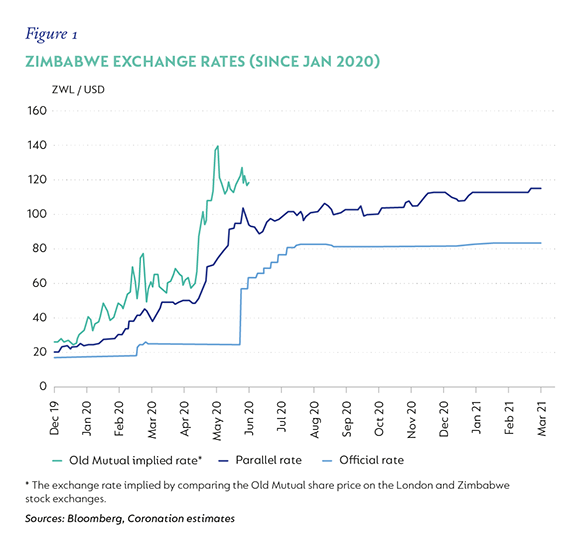 The new system was initially met with scepticism and criticism when the auctions coincided with the suspen­sion of dual-listed shares. Businesses were allowed the freedom to trade in US dollars, but a portion of these dollars had to be converted to local currency. However, investor confidence in the currency prior to the auctions was very low, and a concerted effort was required. Thus far, this has been more successful than what we could have hoped for. Figure 2 shows that volumes continued to improve over the past nine months, with over $1 billion traded since the auctions began – a quantum that was unimaginable a year ago. Transparency has improved, with the Reserve Bank disclosing the highest and lowest accepted bids and, more recently, even publishing a list of 788 entities that were allocated more than $100 000 since the auctions started. 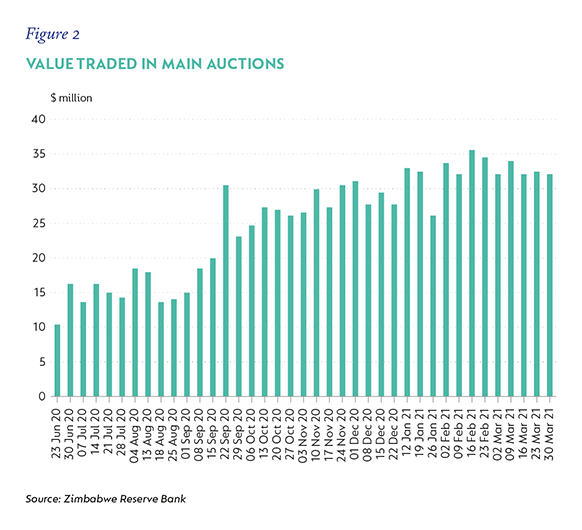 Liquidity is the best we have seen in years. We regularly receive US dollars from the auctions and have received even larger amounts from the interbank market. Over the past year, foreign investors found it much easier to repatriate funds from Zimbabwe than to repatriate money from Nigeria. However, liquidity is still low, and this is still far from being a free-floating currency. Therefore, we continue to apply a liquidity discount in our funds – valuing the shares listed in Zimbabwe at levels well below the official prices. If we valued these assets at the quoted prices, the net asset value of the Coronation Africa Frontiers Fund would have been almost 7% higher at the end of March 2021. We strongly believe that our current approach protects the interests of both new and existing clients, and, should the liquidity situation continue to improve, we will reconsider this discount and realise some of this latent value for investors in the Fund.

The stability of the currency has brought stability to the economy. Month-on-month inflation has dropped to low single digits and it has suddenly become much easier for businesses to plan. For the first time in years, companies in Zimbabwe are telling us that they are confident enough to start investing and expand capacity.

Our recent meeting with Zimbabwe’s Minister of Finance highlighted that the country has become much more investor friendly. It was also clear that the positive developments we are seeing today are the result of a plan that was started three years ago. Zimbabwe is on track to run a current account surplus for the third year in a row and they have started to repay small amounts to international lenders – the first step in restoring Zimbabwe’s ability to access international funding.

The government is showing a lot of discipline in resisting the temptation to print large amounts of money and in addressing the fuel and maize subsidies. The benefit of removing the fuel subsidy was not just the saving on each litre of fuel consumed, but also a large reduction in the total fuel consumed as market-related prices stopped cross-border smuggling, where people bought fuel cheaply in Zimbabwe and sold it at higher prices in neigh­bouring countries.

Even some factors outside of Zimbabwe’s control turned from headwinds into tailwinds. Prices of key exports such as gold and platinum group metals (PGMs) declined between 2012 and 2018, but have seen a strong recovery recently. The severe drought in 2018/2019 not only impacted agriculture, but the low water levels of the Kariba Dam also had a big impact on electricity generation. The drought has ended and it looks like Zimbabwe will produce enough maize to meet the country’s demand this year – a spectacular turnaround from the past decade where production only met about half of the demand.

What is particularly positive is that agricultural output is not only improving as a result of better rainfall, but also because of better planning. Similarly, the increase in precious metal exports is not just because of higher prices, but is also due to policy changes that encourage investments in the mining sector.

We are really excited about the investment opportunities that arise when share prices reflect overly pessimistic perceptions. Zimplats, which is currently the largest holding in our Africa Frontiers strategy, is a case in point.

Zimplats is a Zimbabwean PGM mine and is a subsidiary of Impala Platinum, one of the largest PGM producers in the world. Zimplats is a world-class mine: it is a shallow, mechanised mine that is low on the cost curve (see Figure 3), has a predictable production profile and has sufficient reserves to last for almost 40 years. In addition, the company operates in an industry with supportive fundamentals. Demand is well supported as more stringent emissions regu­lations force vehicle manufacturers to increase PGM loadings, while years of low capex across the industry means that there is not a lot of new supply coming online over the next few years. 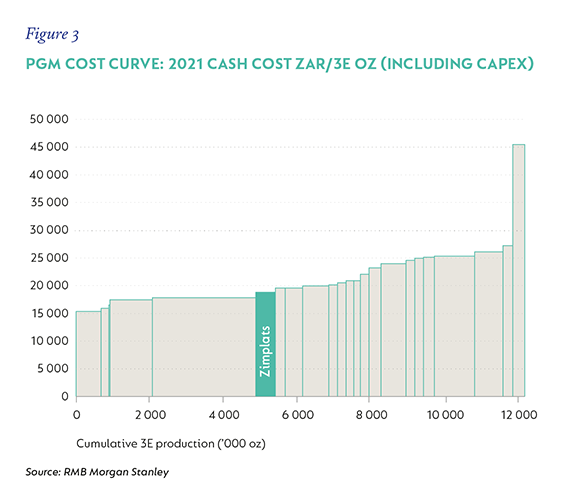 The company has a fortress balance sheet, with a net cash balance of $226 million as at December 2020. This is more than 10% of the company’s current market capitalisation and, given where PGM prices are currently, we believe this cash balance has grown substantially in the first few months of 2021. Importantly, most of the cash is held outside Zimbabwe.

Our investment in Zimplats has done incredibly well for our clients, with the share price tripling over the past two years. However, we don’t believe the company is expensive simply because the share price has increased. The company still trades on a very attractive multiple – Zimplats trades on a forward price-to-earnings ratio of just three times and has a double-digit dividend yield. Even more appealing is the fact that these multiples do not capture the expansion plans announced by the company recently.

In our view, the main reason why Zimplats trades on much lower multiples compared to its peers(see Figure 4) is the fact that this is a Zimbabwean business. 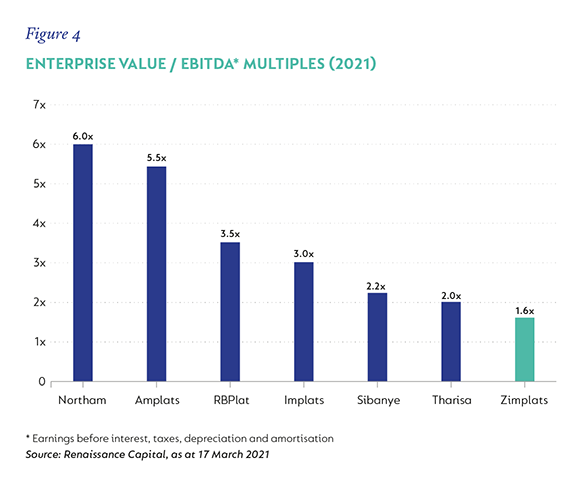 We think there is a general lack of understanding on how much property rights have improved over the past few years. In 2018, the government started to address indigenisation laws, but the 51% local ownership requirement remained in place for platinum and diamond companies. In late 2020, this requirement for platinum and diamonds was also removed. Another significant milestone for Zimplats was when its special mining lease was converted to a normal mining lease in 2018. This now gives it the right to mine for the full life of the mine, and also simplifies and reduces its tax burden. These developments are consistent with the message from other Zimbabwean miners, who report that the government has become much more pragmatic, resulting in a more predictable policy environment that enables mining companies to invest in the country.

A big concern for foreign investors looking at Zimbabwe is the value of the currency and currency repatriation. In this regard, Zimplats is completely different from other local businesses. It is an exporter that generates real US dollars.

This puts the business in a strong position in a country where hard currency is in high demand. The government simply cannot afford for production to halt at a mine like Zimplats and has therefore been supportive in ensuring that mines can continue with their operations.

Another important point for equity investors is that Zimplats is listed on the Australian Stock Exchange (ASX). In contrast to shares listed within Zimbabwe, which has historically exposed investors to repatriation issues, shares on the ASX do not have this problem.

We know that Zimbabwe has seen several false dawns. Many difficult hurdles still need to be overcome before funding from organisations like the IMF becomes a possibility. We also know that it is not impossible that the government will try to access a larger portion of the hard currency generated by this business. However, one of the most important things we try to do as stewards of our clients’ capital, is to try and price risk appropriately. When we look at Zimplats, we believe that investors are blinded by their negative perceptions of Zimbabwe, and, as a result, the company trades on a valuation that offers a very compelling risk-reward profile to the long-term investor.+

Floris Steenkamp is an investment analyst with eight years of investment industry experience.